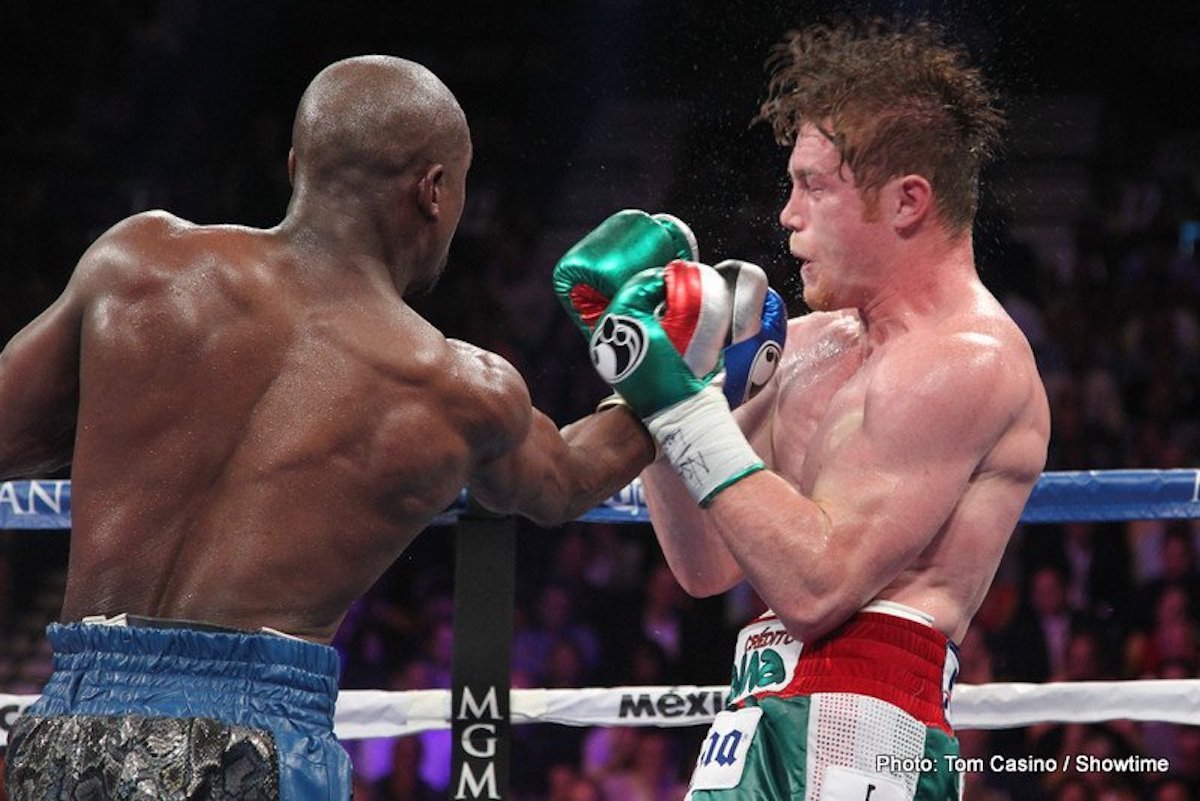 Ricky Hatton believes the heavy loss Mexican star Canelo Alvarez suffered at the hands of Floyd Mayweather back in September of 2013, “made” him as the fighter he is today. Often times, such a crushing loss can all but ruin a young fighter (and some commentators, such as Steve Bunce, did feel as though Canelo had the look at times of a fighter who wanted to quit in the fight, such a schooling Mayweather was giving him) – yet Canelo went on and he has got better and better and better in each of his 16 fights.

Right now, the pound-for-pound best in the sport according to most people, Canelo is shooting for another version of the light-heavyweight crown; this Saturday, in his interesting, perhaps tricky fight with Dmitry Bivol. Canelo is pretty much at his peak right now and that loss to “Money” is firmly in the rear-view mirror. Yet Ricky Hatton, who also fell to Mayweather in a huge fight, feels Canelo owes the experience of the decision loss to Mayweather a great deal.

“I think Mayweather, when he fought Canelo, Canelo didn’t win a round did he? I think Mayweather created a monster in many ways,” Hatton told Talk Sport. “It’s an example to many youngsters out there that if you do get beat, it doesn’t mean your career is over. That defeat, it can make or break someone and it made Canelo. I think I see Canelo retiring undefeated [from here on in]. I don’t see anyone that can beat him.”

Bivol, a good fighter, feels he has the stuff to beat Canelo, and a sprinkling of experts do feel this one will perhaps be a tough fight for Canelo. But Canelo is a huge favourite, once again, and a loss on his part would of course be a huge upset. So is Hatton right, can no-one beat Canelo? One man plenty of us would love to see Canelo face is the other Russian light-heavyweight, Artur Beterbiev. No disrespect to Bivol, 19-0(11), but Beterbiev is an absolute beast of a man and I for one would be a whole lot more excited if Canelo was fighting him this Saturday night instead of his countryman.

Maybe in time Canelo, 57-1-2(39) will get it on with Beterbiev (providing Beterbiev gets through his upcoming fight with warrior Joe Smith Jr okay), Canelo has of course spoken of his desire to become undisputed 175 pound champ. That one would be some fight to see. In the meantime, 31 year old Bivol, with his fine boxing skills and his desire to shock the world, gets the next shot at derailing the Canelo Express.