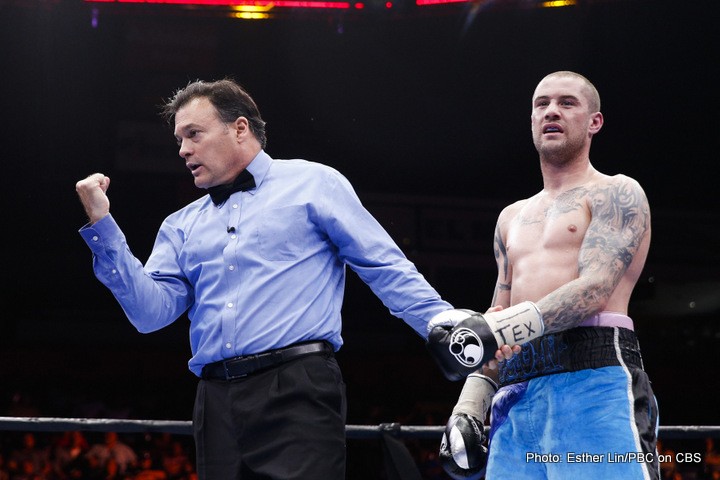 Both Ricky Burns and Anthony Crolla are coming off a big fight loss: Burns to Julius Indongo, Crolla to the classy Jorge Linares – and both British stars are weighing up the possibility of facing one another in what would be a big fight, maybe even a great fight.

Two of the fight game’s “nice guys,” Burns and Crolla have experienced incredible highs and crushing lows. Now, according to a piece on STV News, October 14 has been pencilled in as a possible date for the intriguing clash. Whether it’s in Manchester, home town of Crolla, or in Glasgow, Scotland, home of Burns, this one could be a cracking battle.

“Timeline going daft tonight. Fight with Anthony Crolla was offered and I’m right up for it, would be a cracking fight in Manchester or Glasgow,” Burns wrote on his twitter page.

“Right offer then so am I mate. Same here whether it be Manchester or Glasgow,” replied Crolla.

Crolla, 31-6-3(13) and the former WBA lightweight ruler, is looking at moving up to light-welterweight. Burns, 41-6-1(14) and a former world champ at super-feather, lightweight and light-welterweight, is the older man by four years at age 34, and this fight, if it happens, could come down to who has the most left to offer.

Burns – who has been involved in some great fights with the likes of Roman Martinez, Kevin Mitchell (a great performance by Burns), Raymundo Beltran (a controversial draw) and, more recently, the big-hitting Kiryl Relikh – has been written off more than once, yet his rivals do so at their peril. There are, however, only a number of times any fighter can go to the well.

Together, with their respective skill and passion, Crolla and Burns could give us a domestic classic this year. Let’s hope terms can be agreed to and get this fight on.