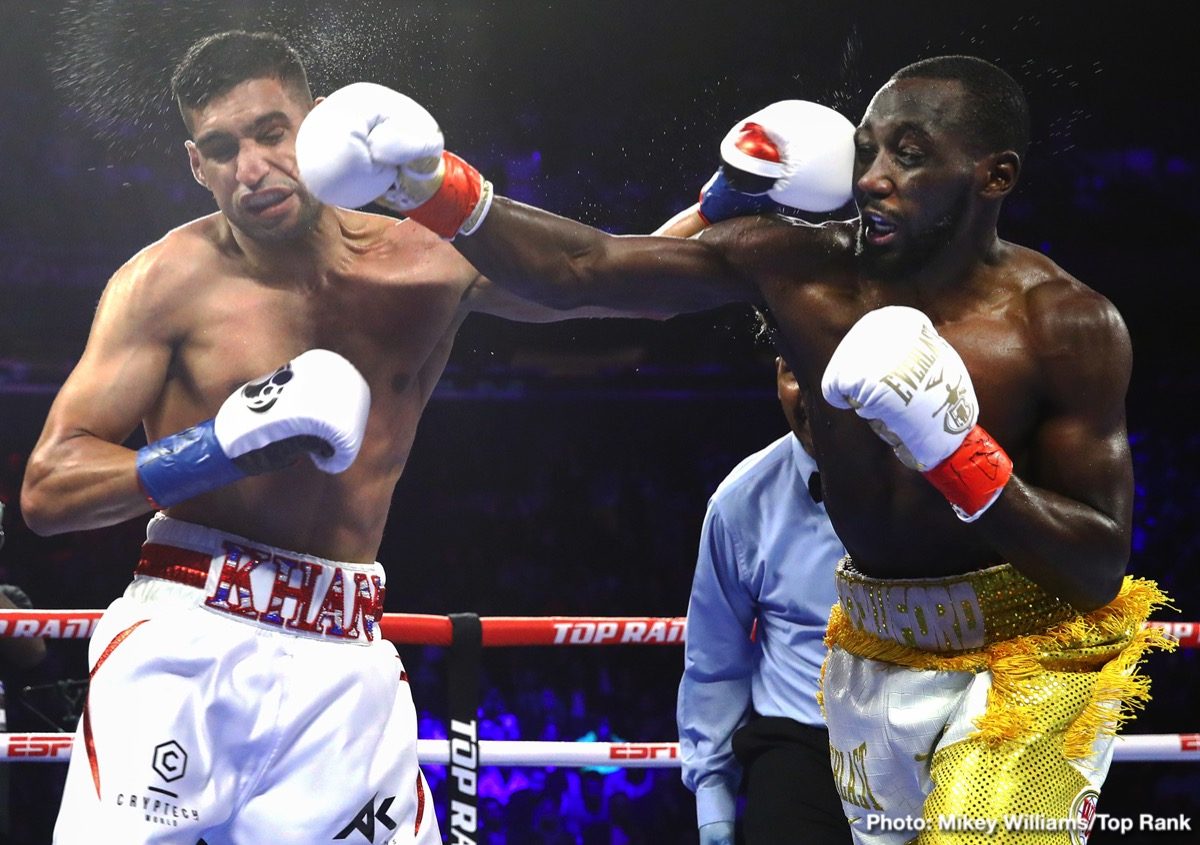 In a horrible ending to a poor mismatch, WBO welterweight champion Terence “Bud” Crawford (35-0, 26 KOs) stopped Amir Khan (33-5, 20 KOs) in the sixth round with a low blow on Saturday night at Madison Square Garden in New York. There was a huge crowd of 14,091 that likely went home unhappy with the result of the fight, which saw Crawford drop the 32-year-old Khan with a low blow.

Khan needed time to recover, but the fight was stopped when he couldn’t continue. Khan looked hurt, and it’s not surprising that he didn’t want to continue. The shot that Crawford hit Khan with was the time where you need more than five minutes to recover from it, which was all he was going to get. Khan looked ill after taking that shot. It was clear that Khan was not going to be able to come back from a shot thrown dead center to the groin with what looked like maximum power from Crawford.

“The fight I want next is Errol Spence,” Crawford said. “Whenever he is ready he can come and get it.”

That fight obviously happening next or likely not in 2020 either. Spence has a lot of other options against guys like Shawn Porter, Keith Thurman, Manny Pacquiao and Danny Garcia. He’s not going to rush over to fight Crawford. What Crawford needs is to fight relevant guys that aren’t shot, and/or fighters with an inflated ranking. Crawford needs to fight someone like Yordenis Ugas, Sergey Lipinets, Luis Collazo or Egidijus Kavaliauskas. Kell Brook is interested in fighting Crawford, and he was at ringside watching to scout out Terence. Seeing a low blow stoppage obviously isn’t something that will make potential opponents want to fight Crawford. Hopefully, this doesn’t become a habit with him hitting his opponents low when things start going badly for him, which you can argue is what was happening. Khan fought well in the fifth, and then was hit low in the sixth. Just a coincidence, I guess. Khan didn’t get hit low when Crawford was doing well in rounds 1 through 4.

Khan was knocked down in the first round from a right hand from Crawford that he didn’t see coming. Khan got up and survived the round.

The fight turned into a boxing match in rounds two and three with both guys having their moments. Crawford was doing better, and switching stances a lot. He did better out of the right-hand stance. The switching of stances seemed to be done to impress the crowd more than the effects it had on Khan, which was basically none. In fact, Khan did better when Crawford was fighting out of the southpaw stance than he was fighting right-handed. Crawford stubbornly continued to switch back and forth to southpaw and orthodox. It just looked like he was trying to impress the crowd and media members with his ability to do this, because he had have known that he wasn’t more effective from the southpaw stance.

Khan nailed Crawford with a big shot at the end of the fourth, and he continued to fight well in the fifth. Going into the sixth, it looked like Crawford was tiring out from all the muscle weight he’d packed on for the fight. He looked like a strong safety from the NFL with all the new muscle he’d added to his once slender frame. It looked like Crawford packed too much muscle on, and he was starting to labor from carrying it. In the sixth, Crawford put an end to the fight by hitting Khan with a hard low blow. That shot was brutal to look at. It’s hard to know why Crawford didn’t think it was low. The shot was as low as it could be, and it was thrown with a lot of power behind it. Khan was out of it after he got hit with that. Some boxing fans think he was faking. It didn’t look like that from this writer’s perspective. Khan was hurt, and they probably could have given him 30 minutes, he might not have come back from it.