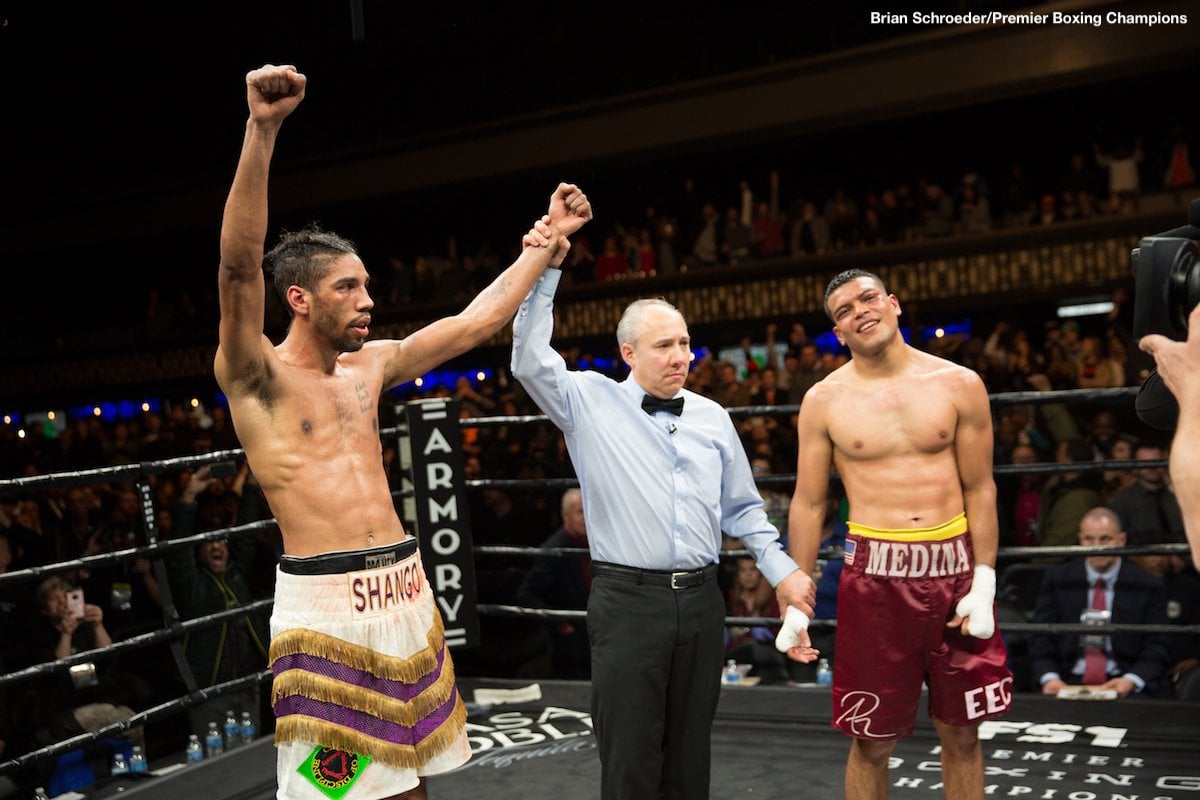 The Amory is listed on the National Register of Historic Places, and definitely has a history from its military importance to professional sports. For a while, it was the home court for the Minneapolis Lakers. Joe Louis fought an exhibition there in ’37, and Sugar Ray Robinson kayo’d Dick Banner in ’42. In ’71, I was one of many who enjoyed seeing on closed circuit presentation of the first and the best of three fights between Muhammad Ali and Smokin Joe Frazier. More recently, there were impressive music venues held there during Super Bowl week.

Friday, the Amory’s new energy proved contagious for Shango. He knew the significance of the Premier Boxing Champions card televised on FS1. He wanted to continue his winning ways and give loyal fans what they wanted, another true challenger and future champion. Caleb “Golden” Truax, Minnesota’s most recent champion, had scored a huge upset victory over James DeGale for the IBF World Super Middleweight Title. However, he let it slip away in a hard fought and bloody rematch. James knew Caleb’s loss was very disappointing for fans.

He was primed and ready for the biggest test of his career; although, he did get rattled in the 2nd rd by a left hook. It did scare the hometown crowd. They saw their hero do the first couple steps to the chicken dance. Moments later it got worse when Jamal touched the canvas. It wasn’t until referee Mark Nelson correctly signaled James had slipped that their worries subsided.

Whew, the bell ending the round sounded and the danger had passed. James resumed control of the fight, but it was tenuous. Abel kept the pressure on and tried his best to stoke the fires with a good body attack. Shango’s gloves and arms moved down from his head to his torso.

Shango was no wilting flower, though. He continued to throw and land a good left jab punctuated with many right hands both as part of a one-two combination and a lead. When the lead right landed, he would pump another one in for good measure. The left side of Abel’s face began to show the effect.

Ramos didn’t get discouraged. He kept all of the rounds close and difficult to score. It was hard to tell if the body shots had the desired effect since their faces lack of expression, but it’s a good bet each man was temporarily in pain. The good body shots from Shango came in the form of left hooks. Abel’s came from either side or up the middle.

When the dust settled, Shango’s hand was raised in victory. Two of the three judges felt Shango did enough for the win 96-94 (twice) The third judge scored it a draw 95-95. So the local man did well and tucked away another win on his way to the top. But the question surfacing is, is he really ready for the top four as he suggests? Who are the top four? Answering that question is a good way to start an argument, but most would agree that Keith Thurman, Errol Spence, Danny Garcia and Kevin Porter would be good candidates. Does Shango have a chance against any one of the four, or maybe the elder statesman Manny Pacquiao? Minnesota fans like to think so.

What would these past and current champions see in Shango as a possible opponent? Initially, they would take in the obvious physical advantage (6’2″) Shango has over most in the welterweight division. However, once they viewed film of him, they would readily see Shango has several flaws. First, he gives up his height, bending low and to the right as part of his defense. The oft repeated motion takes a lot of effort that, along with his suspect footwork, prevent him from countering. He depends too much on upper body movement, which results in him being out of position, and which causes him to be open for a right, or feinting him into a left hook.

To those past and current champions, Shango would currently not present a serious threat. Maybe soon, but now he exhibits too many weaknesses. He needs to improve his footwork, his balance and his technique. He can’t give up his height, and he needs to literally tighten up his defense. Instead of moving a foot, which wastes energy, he needs to move inches. When under attack, he needs to realize he doesn’t always have to flee. He can and should counter more, and move in close at times and hold if needed.

Regardless, James has a champion’s heart and desire.