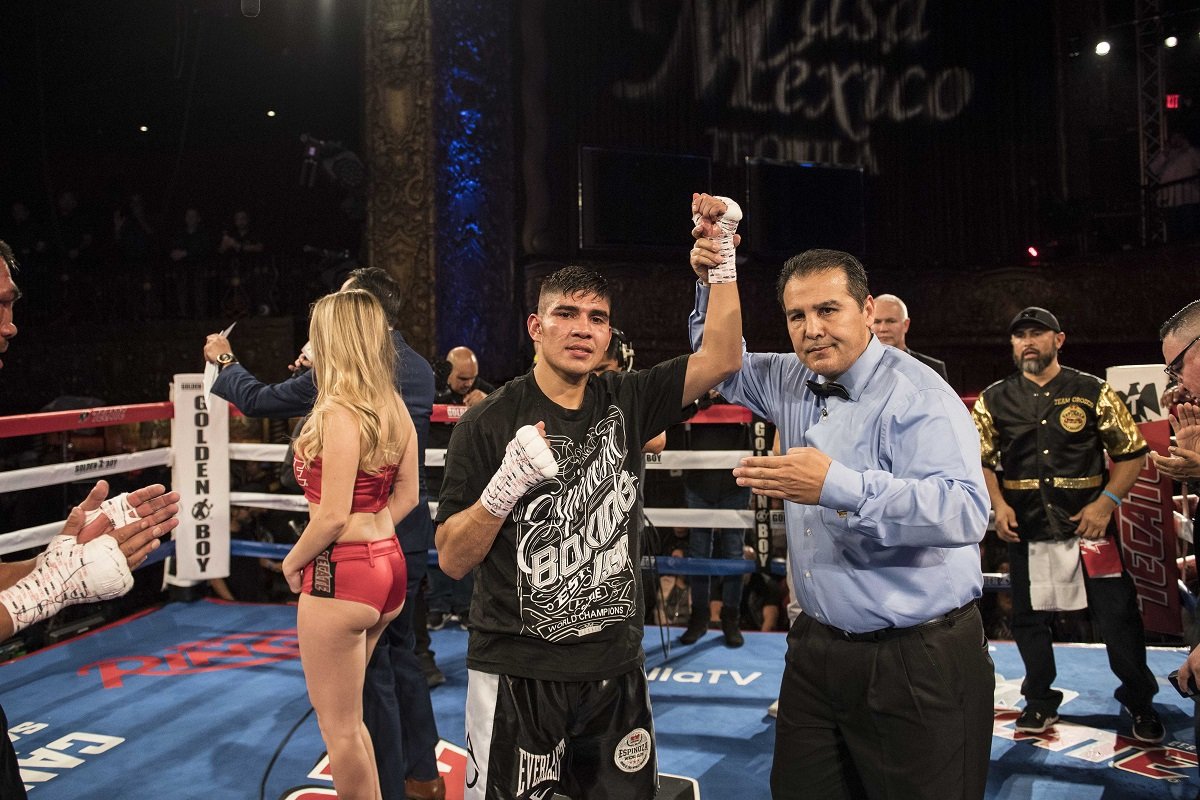 Seniesa “Super Bad” Estrada (12-0, 2 KOs) successfully made her debut under the Golden Boy Promotions banner with an impressive eight-round unanimous decision victory against Mexico City, Mexico’s Sonia Osorio (8-6-1, 1 KO) in the exciting main event of the March 16 edition of LA FIGHT CLUB at the Belasco Theater in Los Angeles, Calif. and televised nationally on EstrellaTV’s Boxeo Estelar. After eight rounds of action, the pride of East Los Angeles, Calif. won with three scores of 80-72.

“It’s an honor to be the first woman to headline a Golden Boy Promotions event,” said
Seniesa Estrada. “I hope this is the first of better and even bigger events. I had a bit of ring rust because I hadn’t fought since September, so I look forward to getting back in the gym and coming back soon.”

In tonight’s co-main event, Oscar Duarte (13-0, 9 KOs) of Parral, Mexico fought an intelligent and aggressive fight before stopping Jose Rodriguez (10-2, 10 KOs) of Tepic, Mexico at 1:53 of the fifth round. Duarte scored two knockdowns: one by a right hand in round four and a body shot that ended the bout in the first round.

“We knew we had a tough opponent,” said Oscar Duarte. “So, we had to work off the jab to get inside. Once we accomplished that, I was able to punish and finish him with shots to the body.Coach Joel & Antonio guided me to victory the entire way.I know I have some a long road ahead of me, but I’m improving each fight and getting closer to a world title opportunity.”

Jousce “Tito” Gonzalez (7-0, 7 KOs) opened the televised portion of the card with a first-round TKO victory against veteran Mexican pugilist Jose Martinez (10-12, 6 KOs) in a bout initially scheduled for six rounds in the lightweight division. Gonzalez stopped Martinez at 2:48 of the first round.

“Seeing all these prospects go the distance against Jose Martinez really made me want to make a statement,” said Jousce Gonzalez. “I wanted to show that I’m on a different level. I wanted to establish myself in the division.”

Antonio “Relentless” Orozco (27-0, 17 KOs) of San Diego, Calif. successfully returned to 140 pounds with an eight-round unanimous decision victory against the durable Mexico City, Mexico native Martin Honorio (33-13-1, 16 KOs). All judges scored the fight 79-73 for Orozco.
“I wanted to change my style a bit,” said Antonio Orozco. “So, I boxed more. People aren’t used to seeing me do that. Having Manny Robles as my new trainer has helped a lot, and I demonstrated that by making 140 easy.”
South Central’s Edgar “Kid Neza” Valerio (13-0, 8 KOs) scored a first-round technical knockout win against Giovanni Caro (26-21-4, 21 KOs) of Mexico City, Mexico in what was a scheduled eight featherweight battle.
“I started off like jelly: smooth but a little slow,” said Edgar Valerio. “The moment came for the knockout and I took it, but at the beginning I was overthinking. Overall, I’m humble and thank I’m thankful to God for the victory. I also thank my entire team for doing a great job helping me develop as a prospect.”
Blair Cobbs (7-0-1, 5 KOs) of Las Vegas made his Golden Boy Promotions debut by fighting to a controversial fourth-round technical draw against Mario Esparza (4-0-1, 1 KO) in the first bout of the evening, which was scheduled for four rounds in the super lightweight division. An accidental headbutt caused the cut on Esparza that forced the fight to be halted at :19 of the fourth round.

“I’m happy to have made my Golden Boy Promotions debut,” said Blair Cobbs. “But it was unfortunate that the fight ended in a technical draw. I felt I was winning the fight and wanted to close out strong. All I can do now is be ready for the next fight and give the fans a great performance.”
Estrada vs. Osorio was an eight-round flyweight fight presented by Golden Boy Promotions. The event is sponsored by Tecate “THE OFFICIAL BEER OF BOXING” and Casa Mexico Tequila. The event will take place on Friday, March 16 at the Belasco Theater in Los Angeles, Calif. Mark your calendars and buy your tickets for the upcoming shows on April 6, June 1, July 6, Aug. 10, and Oct. 12.