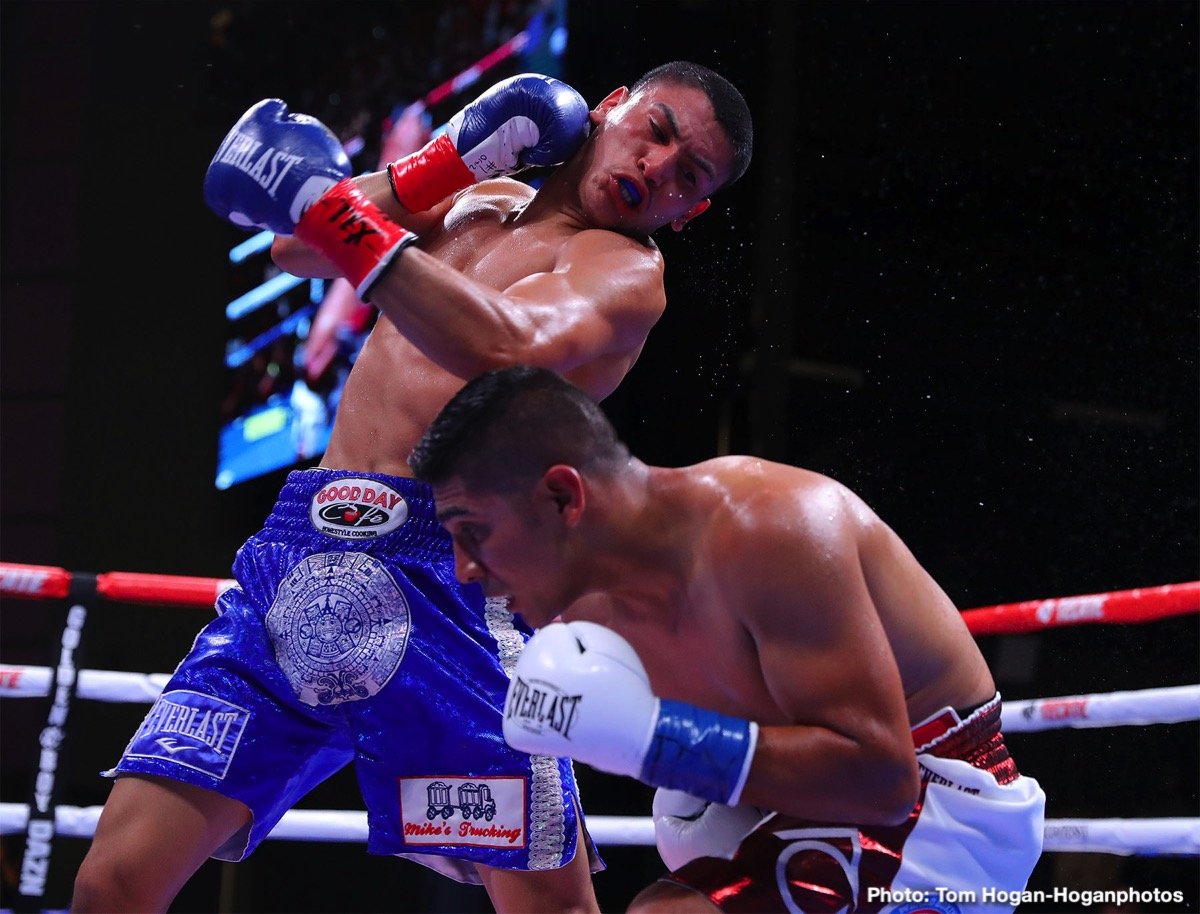 In an exciting war, undefeated Virgil Ortiz Jr. (14-0, 14 KOs) overwhelmed the more experienced Antonio Orozco (28-2, 17 KOs) in stopping the 31-year-old in the sixth round on Saturday night to win the WBA gold welterweight strap on DAZN at the Verizon Theatre in Grand Prairie, Texas.

In the sixth round, Ortiz Jr. dropped Orozco three times after hurting him with a right hand early. Orozco stayed down a long time intentionally after the first two knockdowns in order to recover from the shots, but it wasn’t enough. He needed to try and clinch his way out of the rounds, but he didn’t make an effort to do that.

The referee chose to stop the fight after the third knockdown of the round. The time of the stoppage was at 2:16. It’s debatable whether the referee made the right decision. Ortiz Jr. was tiring in the round, and it’s possible that Orozco would have survived if the referee hadn’t waived it off.

Vergil Ortiz not ready for the elite contenders at 147

This was easily the hardest fight of Ortiz’s three-year pro career. His face was swollen by the sixth, and it was clear that he had a tough time tonight with Orozco. It’s fortunate for Ortiz that he was able to knockout Orozco, because this could have been a very interesting fight if it had gone the full 12 round distance. Orozco exposed Vergil in this fight in showing that he’s not ready face any of the top welterweights like Errol Spence Jr., Terence Crawford, Manny Pacquiao, Keith Thurman, Shawn Porter, Yordenis Ugas or Terence Crawford.

Those guys would be a step too far for Ortiz, who looked barely better than Orozco in the first five rounds. Golden Boy Promotions needs to take it slow with Ortiz Jr., because he’s not ready to fight the best as of yet despite winning the WBA gold welterweight belt tonight.

In the first round, Ortiz Jr. came out on fire, throwing massive shots looking for a quick knockout. Ortiz hurt Orozco, but he wasn’t able to put him down with his follow up shots despite trying hard. Ortiz was missing with a lot of the punches he was throwing in the round, and that hurt his chances of finishing Orozco off.

Orozco surprisingly was competitive with Ortiz Jr. in rounds 2 through 5. That wasn’t expected, because Ortiz Jr came into the fight with a lot of hype about him. He was supposed to destroy Orozco, but he couldn’t do it.

The punch stats don’t do justice to how well Orozco fought tonight. He was impressive in getting the better of Ortiz Jr. in rounds 4 and 5. He showed Ortiz Jr. isn’t the guy that some thought he was. It’s still early yet, and he could Ortiz Jr. could turn into a great fighter, but he’s not ready yet to mix it with the top welterweights.

Other boxing results on the card

After the match was over, Tanajara challenged unbeaten lightweight contender Ryan Garcia to face him. Garcia was in attendance tonight, and no doubt heard the challenge from Tanajara. However. it’s unlikely he’ll accept it, because he’s being matched carefully by Golden Boy.

Welterweight Marcelino Lopez (36-2-1, 21 KOs) fought well in stopping Daniel Echeverria (21-9, 18 KOs) in the fifth round. Lopez knocked Echeverria twice in round 4, and a final time in round 5 to get the stoppage. The referee stopped the fight at 2:59 of round 5.