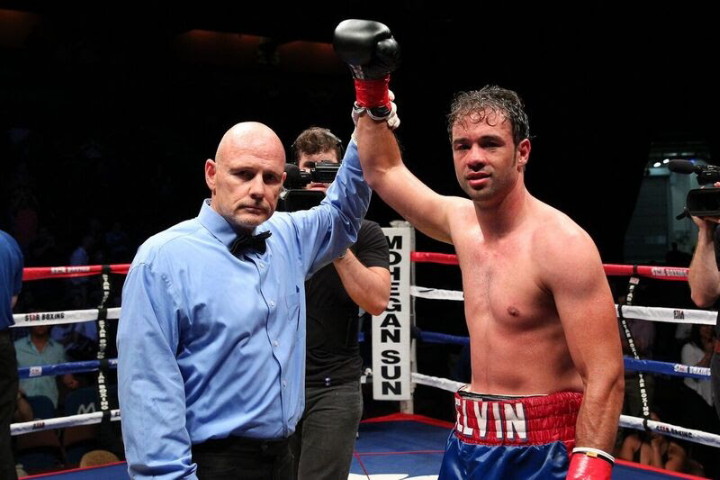 Joe DeGuardia’s Star Boxing put on a terrific 5 bout card last night as former 2 time world championship challenger Delvin Rodriguez (29-8-4 16KO Danbury, CT) had all he could handle from Iraqi War veteran Shawn Cameron (10-2 5KO Brooklyn, NY) as the two warriors fought at a fever pace over the 10 round distance in a Jr. Middleweight battle in the main event at “Slugfest at the Sun” at The Mohegan Sun Arena, Uncasville, CT last night.

The action was fast and furious right from the start with both fighters landing hard punches on each other. Rodriguez tried to use his vast edge in experience landing several clean counterpunches but the ever so tough Cameron kept coming forward, throwing bombs throughout the fight.

There was plenty of ebb and flow in this battle of attrition as the action was heated in every round. As the bell sounded for the 10th and final round ringside observers thought the fight was up for grabs and the two combatants fought as if they felt the same way. The final thirty seconds had the crowd of 2,600 plus in a frenzy as Rodriguez and Cameron stood toe to toe trading shots. As the final bell sounded, both fighters were given a well deserved standing ovation by the fans as Rodriguez came away with the close unanimous win 96-94 on two cards and 97-93 on the third.

The semi final bout saw a minor upset as previously undefeated Light Heavyweight Joel De La Paz (7-1 4KO Atlantic City, NJ) was hammered midway through the first round by Naim Terbunja (9-1 1KO E. Moriches, NY) in a bout scheduled for 6 rounds. Terbunja landed a crushing overhand right to the chin of De La Paz sending the New Jersey fighter flat on his face as the referee correctly called off the fight immediately.

The reminder of the undercard saw Michael McLaughlin (12-1-1 5KO Boston, MA) capture the vacant New England Welterweight title with a unanimous 8 round victory over veteran Shakha Moore (12-22-3 2KO Norwalk, CT), Brooklyn’s Scott “Bang Bang” Burrell (12-2 8KO) had too much firepower for a game Joseph “Chip” Perez (12-4-2 3KO Hartford, CT) winning a 6 round decision in the Jr. Welterweight division, and Jose “Rated R” Rivera (1-01KO Hartford, CT) made his pro debut a successful one as he stopped winless Saul Almeida (0-8 Boston, MA) in the 3rd round of a schedule 4 round Middleweight fight.

The show opened with 2 Amateur bouts provided by USA Boxing of CT.

Promoter Joe DeGuardia had this to say about the evening’s fights “Every one of these kids fought their heart out tonight and the main event was spectacular as Delvin Rodriguez turned back the clock and waged war as we are accustomed to seeing him do so many times in the past. His opponent Shawn Cameron should hold his head up high as he stood in there with a guy who had much more experience than he did and almost pulled off a stunning upset. I’m very proud to have had all these fighters fight the way they did tonight and the crowd at The Sun was so supportive of each and every one of them”.

The night’s action was aired live on Go Fight Live.

From MGM Las Vegas:
Star Boxing also had action the same night in Las Vegas as George “Comanche Boy” Tahdooahnippah fought Ryota Murata on the undercard of the Crawford Postol junior welterweight unification on HBO PPV. Murata was victorious with a first round stoppage.