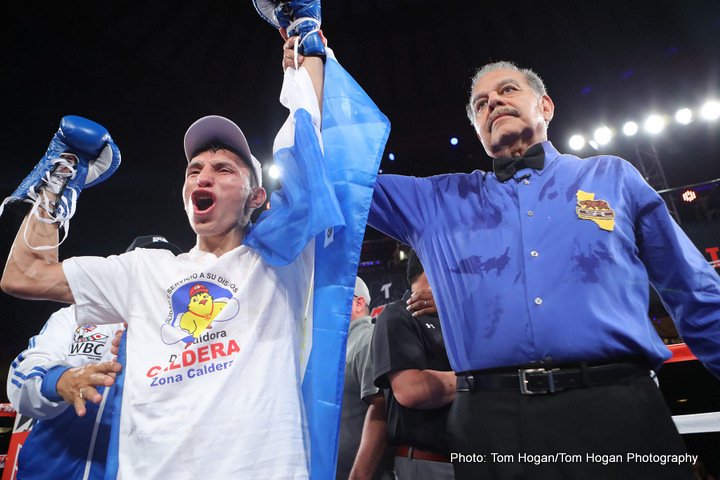 In a heart and soul performance, rugged warrior Rene “Gemelo” Alvarado (25-8, 17 KOs) from Managua, Nicaragua triumphed over Maracaibo, Venezuela’s Roger “The Kid” Gutierrez (15-1-1, 11 KOs) with a technical knockout victory that handed Gutierrez his first career loss as the main event on Boxeo Estelar. The fighters left nothing behind on the mat, Alvarado giving Gutierrez a hard time and a bloody right eye. Gutierrez’s corner waved the fight off at 1:34 in the seventh round of the super featherweight bout.

“This was a very meaningful win for me, and it is accomplishment that we trained very hard for,” said Rene Alvarado. “This puts me back on track to fight for a title. My eyes are looking to any of the winners of tomorrow’s Berchelt versus Miura bouts – I want any of the winning super featherweights next.”

In the co-main event slugfest, South Central Los Angeles featherweight Edgar “Kid Neza” Valerio (11-0, 6 KOs) went toe to toe with Torreon, Mexico’s Jairo Hernandez (18-12, 9 KOs) in a scheduled 8-round featherweight bout. The fighters went back and forth with their aggression, Valerio bringing Hernandez to the floor in the first round and Valerio tasting the mat in the second. The back and forth action had the crowd on their feet, however the judges declared Valerio the victor with scores of 80-71, 80-71 and 79-72.

“I couldn’t let him dictate the pace, I had to stand my ground,” said Edgar Valerio. “Even though I tasted the mat, I am proud of my performance. This was my first full eight round fight, and I know what I need to go back and improve. He’s gone through some tough competition, and some of the guys he’s fought are now fighting for titles.”

Moved up to be the televised opener for the Estrella TV Boxeo Estelar telecast, WBC Youth Silver Flyweight Champion Joshua “The Professor” Franco (12-0, 6 KOs) of San Antonio, Texas improved his record in a six-round fight against Antonio “Tony” Rodriguez (8-16, 3 KOs) of Gomez Palacio, Mexico. The battle lasted all six rounds, Franco putting in work to the body and stunning Rodriguez through various points in the fight. The judges all unanimously decided Franco was the victor with scores of 60-54.

“I didn’t know much about my opponent, but he was a solid fighter. He could hang in there with me no matter how hard I tried to work him down,” said Joshua Franco. “I’m going to take some time off, and go back home to Texas to rest. When I come back, I know I will have to defend my title.”

Huntington Park’s Cristobal Ortiz (2-0, 1 KO) finished his business early in a scheduled four round super lightweight bout against Ronald Rodriguez (1-6, 1 KO). Rodriguez made Ortiz hit the mat once, but Ortiz came back even harder. At the 1:46 mark into the second round with a spectacular right hook to the jaw, Rodriguez collapsed as the crowd jumped in jubilation, adding the first knockout victory to Ortiz’s record.

“I’ve only been a professional for about three months, so I feel like my job right now is to capitalize on the skills that I have now – and build on speed and explosiveness,” said Cristobal Ortiz. “I feel like I tend to rely on my strength sometimes. Right now I just want to make noise, and have people learn my name little by little.”

Opening up the fights at LA FIGHT CLUB and RING TV livestreamed portion, Oxnard, California’s Meiirim Nursultanov (3-0, 2 KO) knocked out his opponent at the 1:47 mark of the first round in an originally scheduled six-round super middleweight bout against Houma, Louisiana’s Lanny Dardar (5-8-2, 3 KOs).

“I feel great! The faster the fights go, the better. It literally took me a minute to figure him out so I could knock him out,” said Meiirim Nursultanov. “I feel good enough to jump back into the ring right now.” 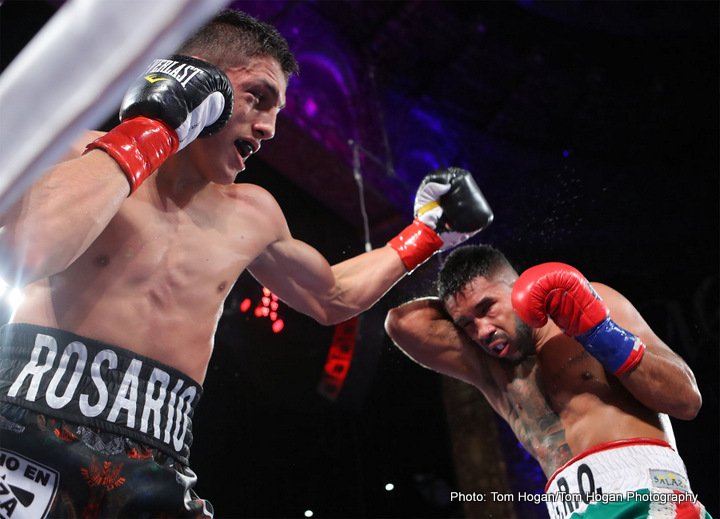 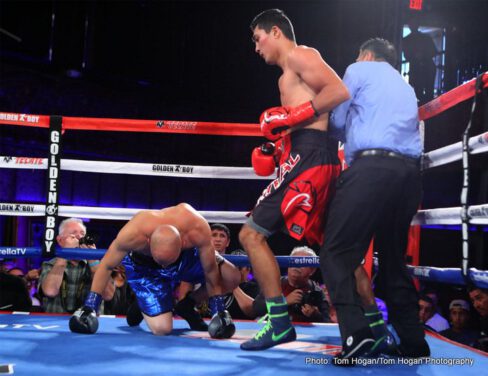 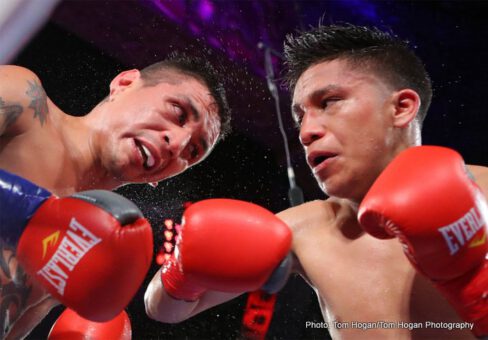 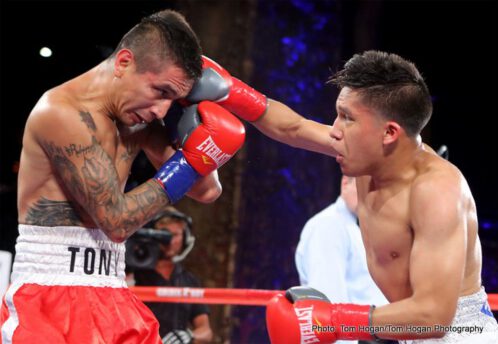 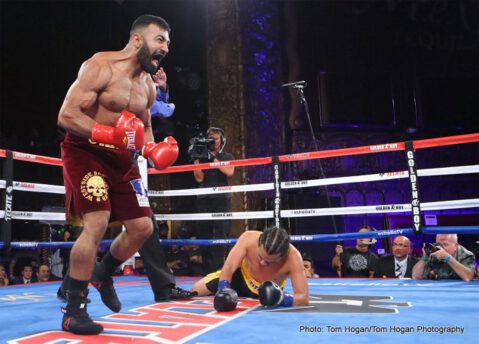 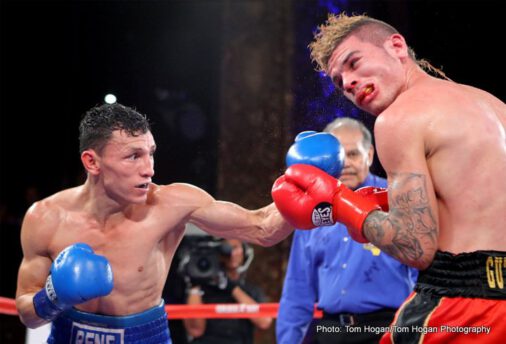 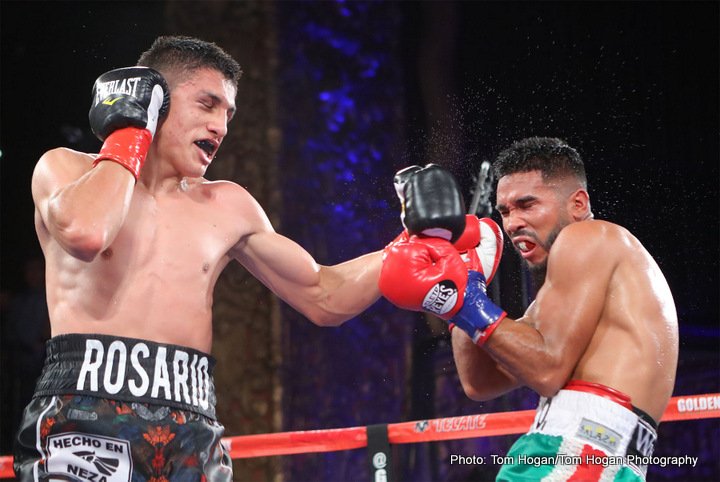