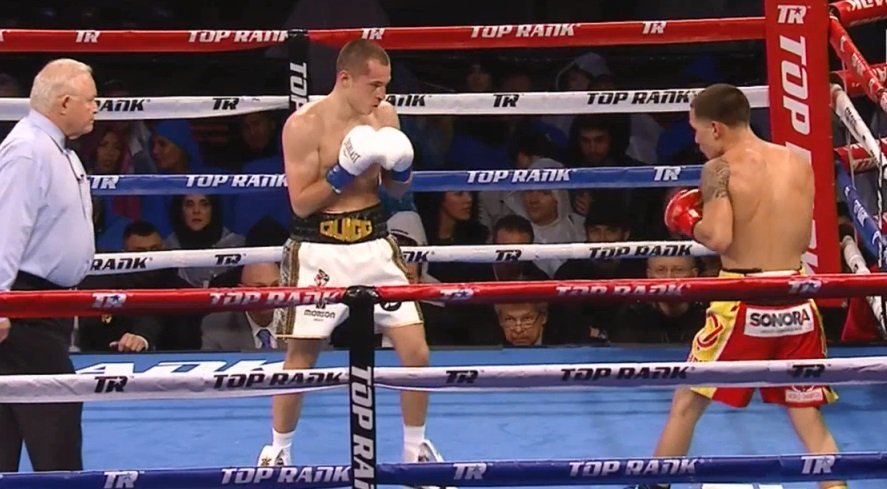 Quigg suffered a broken nose late in the fight. The fight wasn’t the toe-to-toe battle that many boxing fans thought it would be. Valdez used a lot of movement, pushing off and holding to keep Quigg from getting his shots off.

Valdez’s win over Quigg came at a huge cost in the form of a broken jaw. Valdez, 27, had to be taken to the UCLA Medical facility after the fight to have his broken jaw checked out. It was obvious that something was wrong with Valdez’s jaw after the fight, as he was talking and blood coming out of his mouth and his teeth were covered with it. Valdez looked worse than Quigg.

The way Valdez’s jaw, face and teeth looked, he was beaten badly. Valdez won the fight, but it came at a cost. I wouldn’t be surprised if this fight took a few years out of his career. Valdez can’t afford to take punishment like this if he wants to have a long career. I might be in Valdez’s best interest to learn to move more, and thrower fewer punches. He threw almost 1000 punches tonight. It’s fine to throw a lot of shots, but not when you’re nailed back with hard power shots to the head the way Valdez was.

It’s not surprising that Quigg broke Valdez’s jaw, because the Mexican fighter was so frequently preoccupied with throwing flash combinations that he would forget his defense get nailed occasionally by hellacious shots from Quigg. The only reason Valdez didn’t get knocked out is because Quigg was so badly covering up from the nonstop incoming fire from him. But enough of Quigg’s shots got through to do damage to Valdez’s jaw and hurt him badly in the 5th. Valdez’s legs were wobbling after getting hit hard by one of Quigg’s left hooks near the end of the round. To Valdez’s credit, he recovered well in between the 5th and 6th rounds. Valdez threw even more punches in the 6th round than he had in the 6th. If Quigg had a little more talent, he would have taken advantage of Valdez’s wreck-less style of fighting and knocked him out.

“I just hope after tonight’s performance he (Scott Quigg) gets the respect. He went beyond the call of duty,” Quigg’s promoter Eddie Hearn said after the fight.

It would be fun to see a rematch between Valdez and Quigg. That obviously isn’t going to happen. Top Rank, the promoters for Valdez, isn’t going to let him mix it up with another slugger anytime soon. My guess is Top Rank will have Valdez take a nice voluntary defense against a lower level contender for hi net fight and not take any risks with their young star.