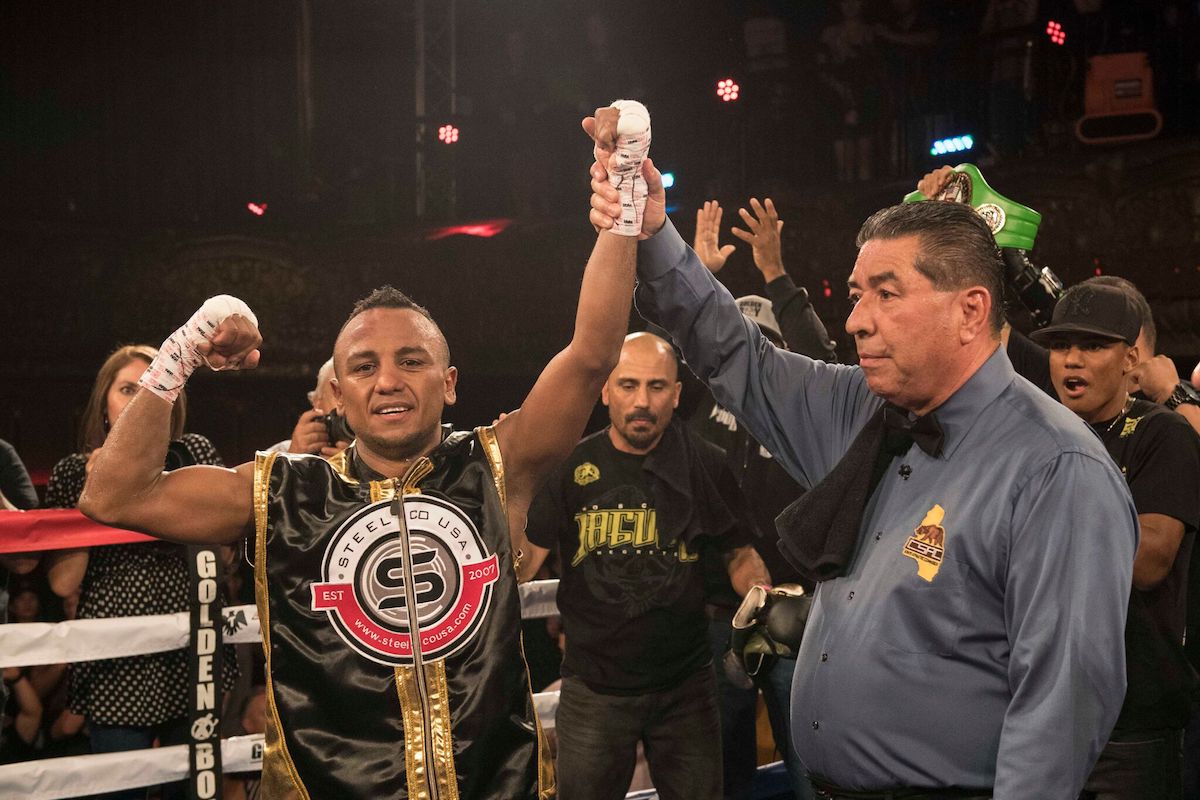 Photo Credit: Albert Baker/Under The Hand Wraps – Oscar “El Jaguar” Negrete (18-1, 7 KOs) once again proved why he deserves another world title shot as he soundly beat Diuhl Olguin (13-10-3, 9 KOs) of Guadalajara, Mexico via unanimous decision in the eight-round main event of the July 6 edition of LA FIGHT CLUB at the Belasco Theater in Los Angeles and televised nationally on EstrellaTV’s Boxeo Estelar. The native of Tierralta, Colombia won with scores of 78-74, 79-73 and 79-73.

“I feel excellent,” said Oscar Negrete. “I give all my respect to Olguin because he’s a tough fighter who came to win. He’s a warrior and can take a lot of punches. I feel I’m now ready to fight for another world title shot. I’m back at 118 pounds where I belong, and I want the opportunity.”

“I hadn’t fought in over a year,” said Rigoberto Hermosillo. “So it took some time for me to find my distance. But then I eventually found it and stopped the fight. I’m back and I’m ready to get better. It’s up to what my team wants, but I’m ready for anyone.”

Raul Curiel (4-0, 3 KOs) of Tamaulipas, Mexico defeated Demetrius Wilson (2-8) of Florissant, Miss. via second-round knockout in a scheduled four-round super welterweight fight. Curiel stopped Wilson at 2:13 of the aforementioned round.

“He [Wilson] was kind of awkward and had an unorthodox style,” said Raul Curiel. “His shorter height was also a factor. That’s why it was kind of hard to find him. Then I got him with the hook to the body and an upper to the head and finished the fight. I felt a big difference training with Freddie Roach. I felt very strong.”

“I felt strong going into this fight and I got the win,” said Blair Cobbs. “I’m going to continue working hard in the gym with the goal to be better each time I enter the ring. I can’t wait to come back.”

Negrete vs. Olguin was an eight-round bantamweight fight presented by Golden Boy Promotions. The event was sponsored by Tecate “THE OFFICIAL BEER OF BOXING” and Casa Mexico Tequila. The fights took place Friday, July 6, 2018 at the Belasco Theater in Los Angeles, Calif. Mark your calendars and buy your tickets for the upcoming shows on Aug. 10, and Oct. 12.