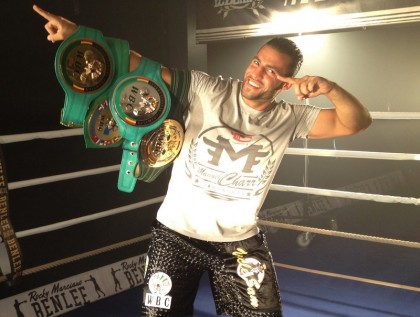 The “world” title fight was much maligned for being just this (we all know Anthony Joshua is the real WBA heavyweight champ) but tonight’s action was actually pretty good. 40 year old Ustinov was the aggressor in the early rounds, backing 33 year old Charr up. Both men swapped plenty of leather, there wasn’t too much clinching and the action proved enjoyable.

Charr picked up a cut above his left eye in round-two, but the blood never really became a factor in the fight. Charr began coming forward, able to push the bigger man backwards in the 4th and 5th rounds and Ustinov, who cannot fight going backwards, was looking tired. Charr had a huge round seven, cracking the older and slower man with a tasty left hook to the head. Ustinov was in real trouble and he did well to hold on as Charr swarmed all over him looking for the finish.

Wild at times and missing, with his right hand especially, Charr scored well with his left hook; his best weapon by far. Charr dropped Ustinov right at the end of the eighth-round with a crisp left hand, Ustinov suffering a nasty gash under his right eye as a result. The bell came a second after the Russian beat the count.

Ustinov was still game in the closing rounds, still throwing punches, but Charr had more energy and he was pulling away on the cards in a pretty big way. In the end, the result was not in doubt.

Charr may have won a spurious belt, but with the win “Diamond Boy” puts himself in position for a big fight down the road. Marketable, fan-friendly and full of heart and courage, Charr could wind up facing a big name soon enough.

Charr cannot truly call himself a word champion, far from it – but he has to be looked at as a top-10 contender.