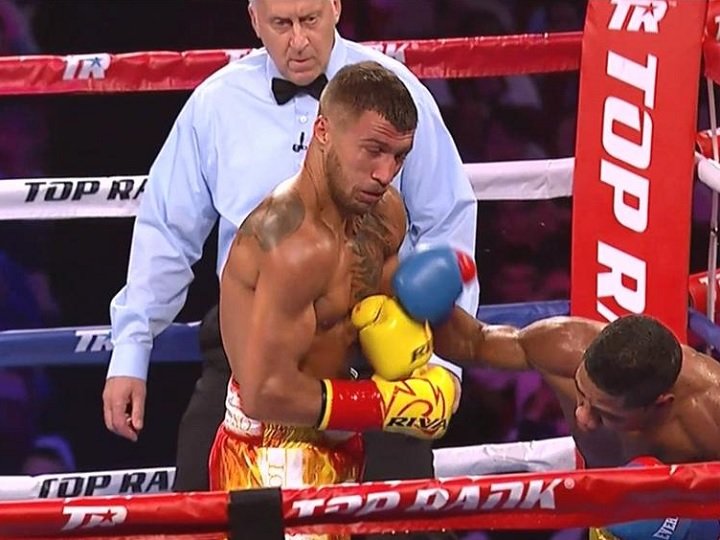 WBO super featherweight champion Vasyl “Hi-Tech” Lomachenko (9-1, 7 KOs) took featherweight Miguel Marriaga (25-3, 21 KOs) to school on Saturday night in handing him his second consecutive loss in stopping him at the end of the 7th round at the Microsoft theater in Los Angeles, California.

Lomachenko toyed with Marriaga for 6 rounds until upping the pressure on him in the 7th to get a knockdown. Marriaga didn’t look hurt. He went down from an accumulation of punches. Nevertheless, Marriaga was taking a lot of machine gun type punches to the head and body from Lomachenko, and he didn’t have the hand speed or the work rate to keep him off of him.

At the end of the 7th, Marriaga’s corner decided it was a good idea to pull the 30-year-old Colombian out of the fight. It was a good decision on their part, as Marriaga was just soaking up nonstop punishment and not throwing anything back. Marraiga was fighting scared, making it too easy for Lomachenko. There are fighters that give Lomachenko problems, and those are the guys that attack him with fast punches and hit him to the body. Then there are the fighters that do poorly against Lomachenko, and those are the type that don’t throw punches and just look mentally defeated. Marriaga would fit in that category along with Nicholas Walters and Roman Martinez. Marriaga seemed to follow the Walters blue print in how to lose to Lomachenko by moving away from him and not throwing punches.

Besides the knockdown in round 7 from a left to the head, Marriaga was also knocked down in round 3.
You can argue the fight should have been stopped by the 4th round when it was clear that Marriaga wasn’t interested in making a fight of it against Lomachenko.

Lomachenko’s decision to show boat and try and make the defeated Marriaga look bad seemed to work in reverse. It made Lomachenko look like a bully against someone that was out of his league. There are instances in fights where it’s fine to showboat, but that’s when you have an opponent that is competitive.

Marriaga was not skilled enough for the fight to be entertaining. As such, Lomachenko’s showboating came across as bullying and cruel. I don’t think it endeared him to the casual boing fans seeing him for the first time. If this was the first time I ever saw Lomachenko fight, I wouldn’t have been impressed. His showboating took away from the fight. It was like watching Terence Crawford showboat against a totally defeated Felix Diaz. Crawford’s showboating was out of place in that fight.

Hopefully in Lomachenko’s next fight, Top Rank will put him in with someone talented and preferably from the same division as him. Picking out a guy coming off of a loss at featherweight was just a really bad idea. I don’t understand that kind of match-making. If Top Rank can’t find good opponents for Lomachenko, then move him up to lightweight and put him in with one of the champions in that weight class. They don’t have to match him against Mikey Garcia if they don’t like the idea of making that fight for whatever reason. Lomachenko could fight WBO champion Terry Flanagan or IBF champ Robert Easter Jr. Top Rank could even more Lomachenko to 140 and put him in with Terence Crawford. It would be interesting to see how these two guys showboat against each other. I’d like to see that. Lomachenko wouldn’t be bored like he looked tonight. Crawford would wake him up with a big shot if he got bored in there.

Note: In the area where I live in the U.S, ESPN didn’t televise the Lomachenko-Marriaga fight live. Instead, they showed an old timer’s NFL awards’ meeting. That had to be a disappointment for Lomachenko’s promoters at Top Rank, because the ratings for the fight might not be what they were hoping for.