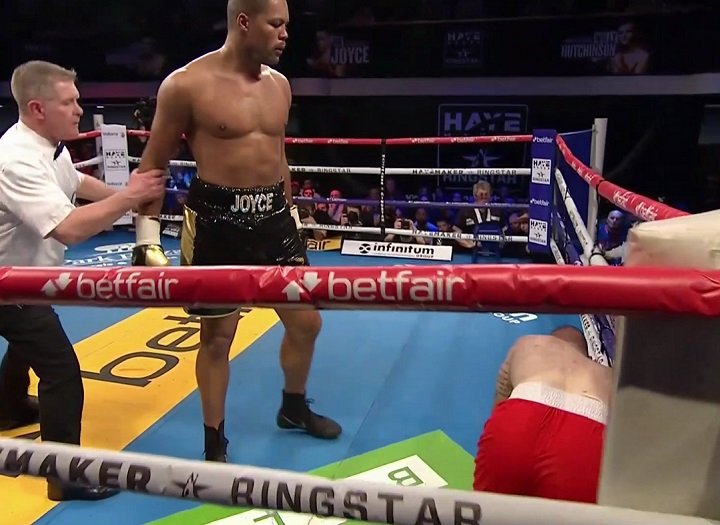 Joe Joyce set himself up for a potential showdown with Dereck Chisora after his devastating win over Rodolf Jozic in the main event of the Hayemaker Ringstar Fight Night — live on free-to-air entertainment channel Dave. In only his second professional fight, the Olympic silver medalist claimed his second victim with a first round stoppage at York Hall.

Now his promoter David Haye wants to see him take on former world title challenger Chisora in a blockbuster Battle of Britain bout on the undercard of his May 5 rematch with Tony Bellew. Speaking after Joyce’s impressive victory, Haye revealed that Hayemaker Ringstar are willing to offer Chisora a lucrative pay-day to take the fight at the O2 Arena in London.“We are willing to offer Dereck a sizeable six-figure pay day to take the fight,” Haye said. “It would be worth as much as Chisora’s European Heavweight title shot against reigning undefeated 14-0 Champion, Agit Kabayel,” said Haye, insisting Joyce is a match for the best heavyweights in Britain. The ‘Juggernaut’, described by many as ‘the future’ of the sport, started supremely against big-hitting Jozic with a powerful flurry of body shots. And then deep into the opening exchanges, Joyce’s right hook sent Jozic spiralling to the canvas to bring an early end to the proceedings. “I made sure I got a good warm-up and was straight in and ready to go,” reflected Joyce. Haye, also satisfied with Joyce’s performance, added: “I was very happy. He landed beautifully.”

Fellow Ringstar stablemate Willy Hutchinson produced a hearty performance to put Eric Mokonzo away on points and extend his perfect start to life as a professional fighter to 3-0. The Scottish teenager, 19, flew out of the blocks with a series of ferocious punches. The onslaught continued into the second with Hutchinson underlining his exciting potential, landing a barrage of heavy blows. Yet Mokonzo stood firm and traded back in the third when he shook the teen with a fierce jab to force a bloodied nose. Hutchinson, backed by a lively Scottish contingent, recovered well and forced the referee to dock his opponent a point for holding on in the fourth. Patience proved a virtue for Hutchinson as he made a breakthrough to knock down the local Bethnal Green fighter in the fifth. And ‘Braveheart’ Hutchinson eventually ended Mokonzo’s resilience to score a deserved, unanimous decision from the judges after six action-packed rounds.

London lightweight Mo Gharib, 25, opened the evening with an impressive 40-36 points victory over Devon’s Jamie Speight to extend his unbeaten start in the professional ranks to two wins from two.

Hayes welterweight Jack Newham, meanwhile, was another young fighter to display his promise. The 21-year-old was put to the test but overcame Jan Korec, 40-36 on points. His record now stands at 3-0.

Fellow welterweight prospect Sam Gilley delighted the East End crowd as the local Walthamstow boy defeated Daniel Bazo. The 23-year-old delivered a fearsome right hook to send Bazo to the canvas early on in the second.He then floored Bazo once more before the Czech fighter’s corner retired him ahead of the third round.‘Magic Man’ Gilley‘s record remains unblemished at 4-0. Anesu Twala also protected his flawless record, moving to 4-0 following his 40-37 super lightweight points victory over Cardiff’s Rhys Saunders. The Zimbabwean-born Lewisham fighter, 26, lived up to his ‘Bad News’ nickname in a dominating display. Dean Richardson dispatched Czech veteran Jan Balog to stretch his perfect record to 6-0. The Middlesex welterweight looked a class apart and claimed a convincing 40-36 landslide with the judges. And Luton‘s Linus Udofia saw off late stand-in opponent William Warburton in a 40-36 points win to improve his record to 7-0.

You can re-live all the action on free-to-air UKTV catch-up.

Catch up on all the action from tonight’s fight on UKTV Play.

Hayemaker Ringstar, the partnership between two-weight World Boxing Champion, David Haye, and world-renowned promoter, Richard Schaefer, will be on hand for their second televised ‘Hayemaker Ringstar Fight Night’, on February 16th at York Hall in London.

Headlining the show will be Olympic silver medalist Heavyweight Joe ‘Juggernaut’ Joyce who entered the professional ranks in emphatic style in October. Announcing his debut against former WBO Inter-Continental Champion Ian Lewison, many saw this as an unnecessary risk for Joyce but aged 32 he has no time to waste and promoters Haye and Schaefer are looking to fast track him to Title fights. From the first round Lewison struggled with the sheer power and sizable engine of the ‘Juggernaut’. A heavy left in the eighth caused Lewison’s corner to throw in the towel and the contest was waived off 2 minutes and 35 seconds into the round. Joyce now faces the 25-year-old Rudolf Jozic 4-1 (3KO) from Croatia. Jozic is a heavy hitter and will no doubt be looking to add to his knockout record on February 16th.

The Heavyweight rivals will be supported in an explosive matchup between current English Champion and former Commonwealth Champion John O’Donnell (32-1, 11KO), as he defends his English Welterweight title against all action fighter Tamuka Mucha (16-1, 4KO) of Reading. This English Title Fight is also the final eliminator for the British Title.

Another member of the Hayemaker Ringstar stable, Willy ‘Braveheart’ Hutchinson will return to the ring fresh from his recent win in Paris. Scotland’s amateur World and European Champion will be looking to emulate his debut success where from the first bell Hutchinson went straight to work, forcing referee Lee Every to stop the contest after just one minute and 29 seconds into the opening round. He has since fought in Paris where despite being on foreign soil he added another victory to his professional record, defeating Frenchman Cyril Joly in a technical knockout in round 2.

David Haye said: “I’m extremely excited to be back in York Hall after so many years for Hayemaker Ringstar’s second Fight Night. This will certainly be a night to remember, since Hayemaker Ringstar’s first event, the stable have been training hard and can not wait to get back out there! I am confident we will have another very successful evening emulating our opening event held last year in the Indigo, 02. I have no doubt that both Joyce and Hutchinson are future World Champions so it is fantastic to be able to introduce them to such a wide audience from their start of their professional careers.”

“The crowd is in for a thrilling night, with our packed card, and I’m predicting some fierce knockouts. Many were surprised Joyce took on such a challenging opponent for his professional debut but he proved his worth and in my eyes is definitely ready for this next challenge.

The ‘Braveheart’ Hutchinson is always keen to put on a show and February 16th will be no different. He continued to build on his success in Paris and can’t wait to get back in the ring next month. ”

Richard Schaefer added “February 16th is set to be a great night for the Hayemaker Ringstar stable, both Joyce and Hutchinson are huge talents and future stars of the sport. I watched Joyce sparring in LA earlier this week and without question he is a force to be reckoned with. I anticipate a tough night in the office for Jozic.

Former World Youth and European Champion Hutchinson the youngest of the stable but an incredible talent. He is a performer both in and outside the ring, February 16th will be no different, it is set to be a fantastic evening of boxing.”