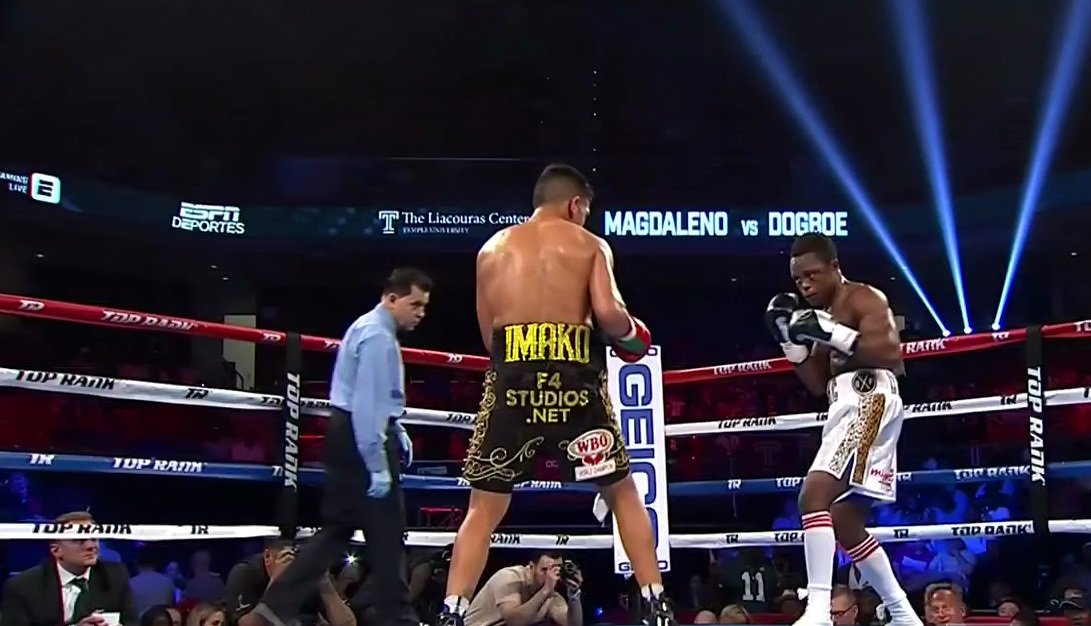 WBO interim super bantamweight champion Isaac Dogboe (19-0, 13 KOs) overcame a bad start to come on strong to stop WBO 122 lb. champion Isaac Magdaleno (25-1, 18 KOs) in the 11th round on Saturday night on ESPN at the Liacouras Center in Philadelphia, PA.

Magdaleno dropped the 23-year-old Dogboe in the 1st round after hurting him with a right hook behind the head. Magdaleno nailed Dogboe with three more quick punches to drop. However, Dogboe was able to come back strong to hurt Magdaleno with a crushing right hand that dropped him in round 5.

Magdaleno was never the same after that knockdown. Dogboe punished Magdaleno with body shots for the remainder of the fight until stopping him in the 11h.

Magdaleno was knocked down three times in the fight in getting dropped once in round 5 and twice in round 11. The referee stopped the fight in the 11th after the second knockdown. Magdaleno was hurt and not in the position to continue fighting. The fight was stopped at 1:38 of round 11 by referee Benjy Esteves Jr.

In the 11th, Dogboe knocked Magdaleno down with a left hook to the head. Magdaleno, 26, showed heart to get up off the canvas to keep fighting. Dogboe immediately went after Magdaleno’s midsection and hurt him with a hard shot that caused him to lean forward. Dogboe followed up with a left hook to the head that put Magdaleno down. With the way that Magdaleno was clutching his midsection, it appeared that he was hurt more by one of Dogboe’s body shots than he was by the left hook that dropped him.

The thing that Dogboe had going for him in the fight was the superior conditioning. Dogboe was able to keep fighting hard for the entire fight, and Magdaleno was unable to do that. Magdaleno was at his best in the first 4 rounds. After that, he wasn’t as strong as he had been.

A big part of that could have been the body shots that Dogboe landed in the fight. He was targeting Magdaleno’s midsection early on and kept throwing shots to that area and it seemed to weaken him. Magdaleno was also coming off a 1-year layoff, and that didn’t help him.

Magdaleno came back in round 9 to get the better of Dogboe with some hard shots. It looked like Magdaleno had gotten his second wind. However, Dogboe came back strong in the 10th and punished Magdaleno to the body after trapping him against the ropes. Magdaleno tried to bluff Dogboe by motioning for him to come forward to exchange with him.

Instead of Dogboe becoming cautious about attacking Magdaleno, he went right after him, hammering him with head and body shots for the remainder of the round. At the end of the round, Magdaleno walked back to the corner while clutching his midsection. It was clear that he was bothered by Dogboe’s body shots.

Magdaleno came out fast at the start of round 11, landing some hard shots and briefly looking fresh. However, Dogboe then attacked him to the body and immediately him against the ropes. At that point, Dogboe dropped Magdaleno with a left to the head after hurting him with a body shot. Magdaleno was defenseless after that, and at the mercy of Dogboe, who then dropped him for a second and find time to get the stoppage.