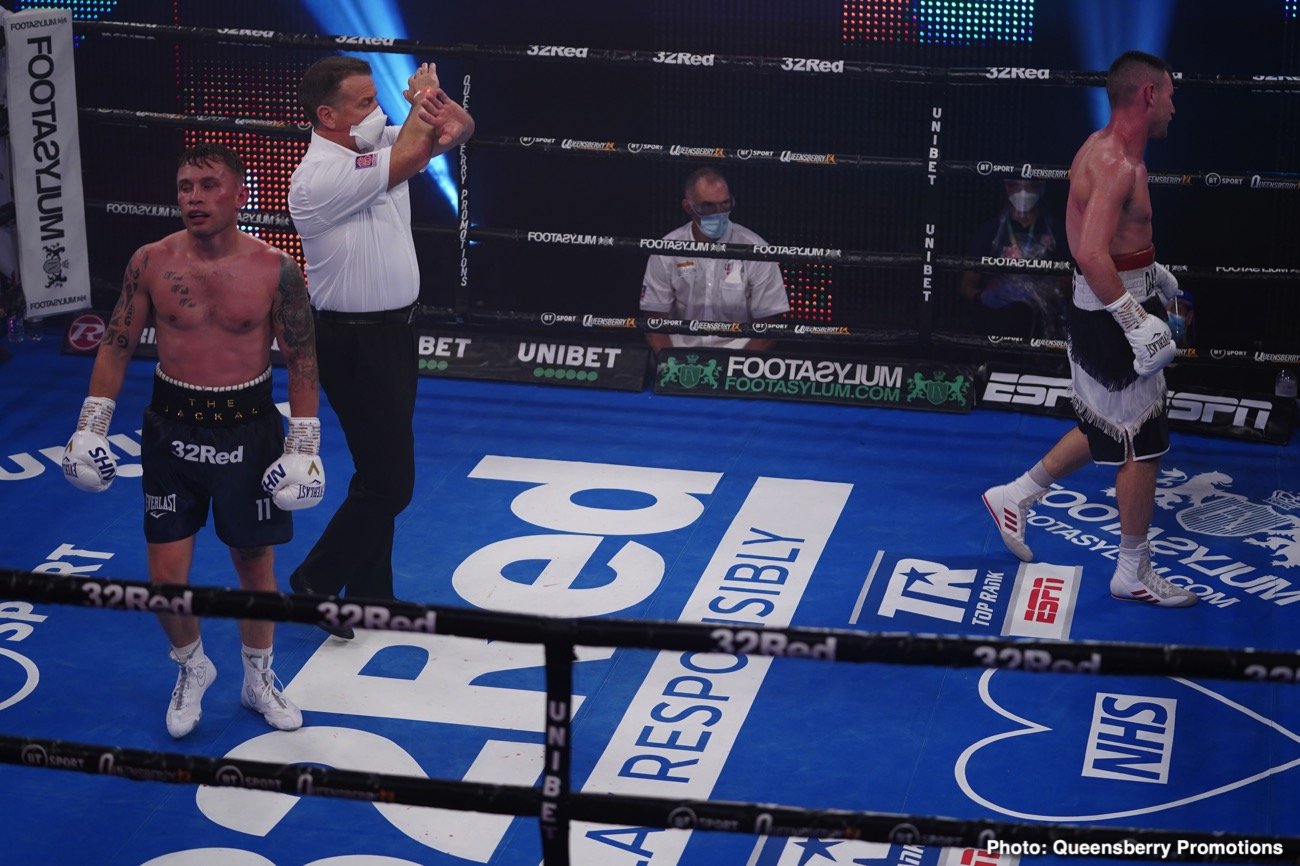 Carl Frampton (28-2, 16 KOs) picked up his second win at super featherweight in stopping Darren Traynor (16-4, 7 KOs) in the seventh round in a body-punching clinic on Saturday night at the BT Sport Studios in London.

Frampton hurt Traynor with a powerful left the body in the 7th, which caused him to turn his back to him and waive to the referee that he didn’t want anymore.

That was definitely a no mas from the 33-year-old Traynor, but he clearly had enough from the body punching by Frampton.

You can argue that the fight should have been stopped in the sixth round when Carl dropped Traynor with a scorching left to the body.

That was the type of shot that would have stopped most fighters, but Traynor made it back to his feet in barely beating the count. Before getting back up, Traynor was face first on the canvas looking like he was in a great deal of pain.

The referee gave Tayner the benefit of the doubt in giving him the traditional count. Nowadays, referees stop fights when they see a guy as hurt as Traynor was, but tonight was a different situation.

Perhaps the referee was thinking about all the fans at home watching on BT Sport and ESPN+, and he might have wanted to give them a good show. Whatever the case, you got to give Traynor full respect for getting up and continuing to fight for another round.

The fight was stopped at the moment by the referee Michael Alexander waived the fight off at 1:00.

Frampton’s body punching out of this world

In round six, Frampton, 33, hit Traynor with a beautiful left to the body that put him down face-first on the canvas.

It looked like the fight was going to be stopped at that moment, but surprisingly the referee waited until Traynor got to his feet, which he did at the count of nine.

The way Traynor got back to his feet, he looked surprised that the contest wasn’t waived off at that moment.

With the victory, Frampton will now be challenging WBO super featherweight champion Jamel Herring for his title in the fall.

If Frampton attacks Herring with the same kind of body punching he was throwing tonight, it’s hard not to see him winning by a knockout.

Frampton has mostly been a headhunter during his career, but in his two contests since moving up to 130, he’s transformed himself into a vicious body puncher with his victories over Traynor and Tyler McCreary.

Frampton looked rusty in the first five rounds tonight and didn’t show the same foot and hand speed that he’s exhibited at super bantamweight and featherweight.

Some of it is age, but weight gain is the major thing. Frampton doesn’t carry the added weight as well as when he was competing at 122 and 126. It doesn’t help that Frampton has been out of action due to the pandemic.

It wasn’t all bad from Traynor, who showed decent power to go along with his size. He gave Frampton a good fight in helping him get ready for his title shot against the winner of the September 5th contest between WBO super featherweight champion Jamel Herring and Johnathonan Oquendo.

Herring (21-2, 10 KOs) should beat Oquendo, which will lead to Frampton then facing him for his WBO title in November. It should be interesting.

The only thing that this writer didn’t like from Frampton tonight was how slow and sluggish he looked against Traynor.

This wasn’t the same Frampton that boxing fans had known from when he fought at 122 and 126. He’s slowed down since moving up to 130, and he’s not showing the speed that he once had.

It might not matter that Frampton has lost speed and mobility. If he can attack Herring to the body the way he did against Traynor tonight, he’s not going to last long under those kinds of shots.

Frampton is like anther Canelo Alvarez with the way he attacks the body, and there aren’t too many super featherweights that will be able to take those kinds of shots for long without going down for the count.

Despite two low-blow point deductions in the 4th and 5th, the 28-year-old Conlan got his act together in the 10th and unloaded a storm of power shots that led to the referee stepping in to halt the slaughter.

The match was stopped officially at the 1:54 mark of round 10.

Conlan will be moving down to 122 and he could soon be challenging for the WBO super bantamweight title against Angelo Leo. He’ll have an excellent chance of beating Leo.

Welterweight Paddy Donovan (4-0, 3 KOs) destroyed Des Newton (8-16, 2 KOs) in a mismatch.  The Top Rank promoted Donovan made it to easy in treading Newton like a speed bump in stopping him with a right-hand body shot.

In a controversial fight, lightweight Archie Sharp (19-0, 9 KOs) beat Jeff Ofori (10-3-1, 3 KOs) by a 10 round referee’s decision by the score 96-95. Referee Marcus McDonnell made a judgment call in an unpopular decision.