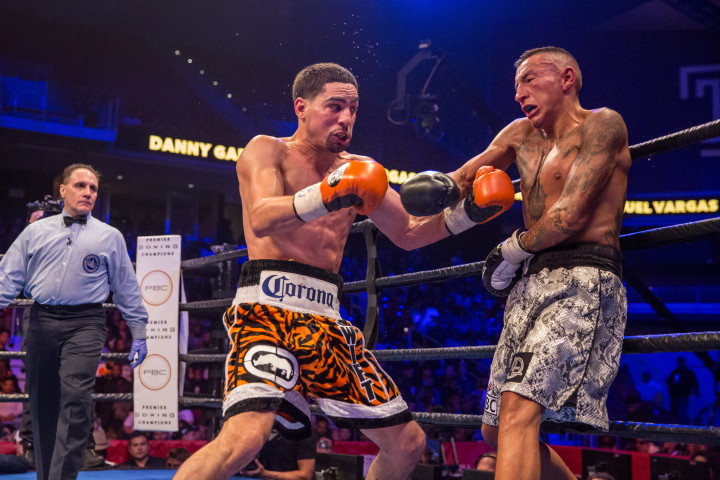 Garcia dropped Vargas in round 2 with a right hand. It was nice counter shot that Vargas never saw coming. It was a good punch, but nothing spectacular.

In rounds three through six, Garcia fought at a slow pace in looking for big single shots. He didn’t have to worry about Vargas throwing anything meaningful, because he didn’t have any power to speak of. You can argue that the main reason why Vargas was selected was because of his lack of punching power. It also helped that Vargas is technically a contender in the World Boxing Association’s rankings at #6.

Corrales Vs. Castillo One: The Greatest Fight Ever?

Vargas didn’t fight like a contender tonight nor did he fight like one last year when Errol Spence knocked him out in 4 rounds. It took Garcia three more rounds to do the job against Vargas than Spence did. You can take that whatever way you want.

Garcia will now be fighting WBA welterweight champion Keith Thurman on March 4th in a unification match. It should be a good fight, and will help weed out an unneeded champion. I suspect it’ll be Garcia.

Missing from that bunch are guys like Spence, Shawn Porter, Keith Thurman, Tim Bradley, Manny Pacquiao, Jessie Vargas, and Andre Berto. It’s impossible to know how good Vargas is because he’s yet to fight a good welterweight. Tonight’s contest only proved that Garcia could beat a guy that arguably shouldn’t be ranked in the top 15 at all in Vargas.

Billy Joe Saunders: This is life and death for me

Unbeaten junior middleweight contender Jarrett Hurd (19-0, 13 KOs) defeated former IBF welterweight title challenger Jo Jo Dan (35-4, 18 KOs) by a 6th round TKO. The fight was stopped in the 6th by referee Benji Esteves Jr. at 1:06 of the round. It was a good win for the 26-year-old Hurd. Dan moved up in weight from the welterweight division in 2015. He’s not really cut out to be fighting at 154. He doesn’t have the punching power.

It’ll be interesting to see if Hurd can win a world title at 154. He gets hit a lot, and he’s not the biggest puncher or the slickest fighter in the 154lb division. Hurd may need to bide his time before he can one day win a world title. Right now, I don’t see Hurd being good enough to beat the current champions in the division. I think Hurd would also lose to the top junior middleweight contenders like Demetrius Andrade, Julian “J-Rock” Williams, Miguel Cotto, Vanes Martirosyan and Erickson Lubin.