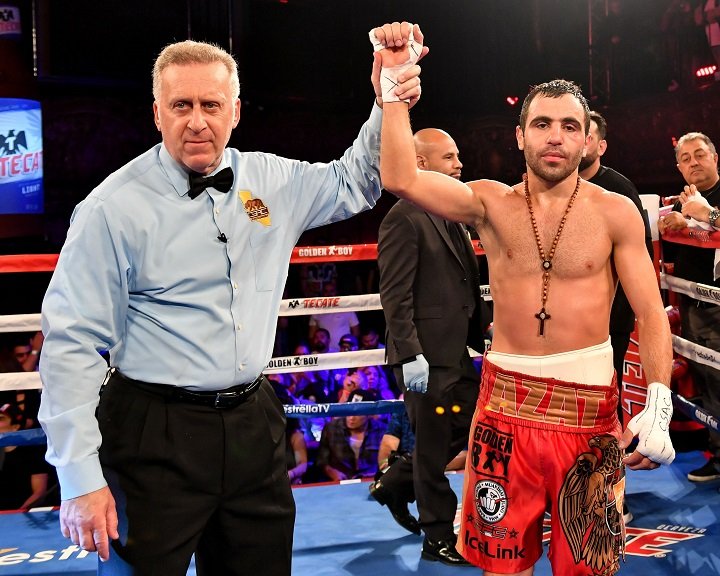 In front of a sold out Belasco Theater, Armenian fighter Azat “Attack” Hovhannisyan (12-2, 10 KOs) of Los Angeles, CA took down Mexico City’s Isao “Kato” Carranza (15-9-1, 8 KOs) in an eight-round super bantamweight main event fight. Towards the end of the third round, Carranza slipped yet rebounded back to fight. Hovhannisyan, living up to his nickname “Attack,” earned a unanimous decision victory with all judges scoring the fight 80-72.

“I got the win tonight–the energy of the crowd and being the main event was great,” said Hovhannisyan. “I hurt my hand in the last rounds, and I was only fighting with one hand–
that’s why they call me ‘Crazy A’ in the ring, you don’t know what you’ll get from me.”

In the televised co-main event, Santa Ana, CA fighter Alexis Rocha (8-0, 5 KOs) dominated Cesar Valenzuela (7-1, 2 KOs) of Ciudad Juarez, Mexico from the first bell to the last in this eight round welterweight bout. Proudly displaying his talents in front of a cheering crowd, Rocha easily countered every shot thrown by Valenzuela. With all judges scoring the fight 80-72 in favor of Rocha, the undefeated southpaw phenom took home another victory.

“I knew it was going to be a tough fight when we took it, and I knew I wasn’t going to be able to blow him away,” said Alexis Rocha. “I feel great, not many 19-year olds can say they can go all eight rounds, or say that they have eight straight victories.”

Opening up the Boxeo Estelar telecast, the always-entertaining Niko “Baby Face” Valdes (5-0, 5 KOs) of Miami, FL added another victory to his record with a defeat over Guadalajara, Mexico’s Ernesto “Gatti” Berrospe (14-12, 9 KOs). With his signature slick style, “Baby Face” immediately sent Berrospe around the ring, knocking him down in the opening stanza of the super middleweight fight scheduled for six rounds. Continuing to charge ahead, Valdes showed no mercy-knocking out Berrospe at 2:26 of round two with a punishing body shot.

“It’s been only a little over a year since I’ve been a professional, and this fight I felt a lot more confident,” said Valdes. “I usually can’t even sleep on the night before a fight, and this time I felt like I prepared enough to make sure I won in the ring, which makes a huge difference in my performance. I was excited to face an opponent with a lot more experience.”

Los Angeles, CA native and Westside Boxing favorite Tenochtitlan “T-Dog” Nava (6-0, 1 KO) faced his toughest challenge yet in Tijuana, Mexico’s Christian Renteria (7-5, 6 KOs) in a super featherweight bout that went the four-round distance. Both fighters viciously brawled throughout the fight-exchanging hooks and jabs in an attempt to take the upper hand. Ultimately, the judge’s scores of 60-54, 59-55, and 58-56 awarded “T-Dog” a unanimous decision victory.

“I would rate my performance as a C+ honestly,” said Nava. “I need to start sparring other fighters who are southpaws or more left-handed fighters. I could feel his power fade as the rounds progressed, but I had trouble blocking his punches. Having the crowd here was motivating, but it also feels like you have more to prove and you feel the pressure to win.”

Kicking off LA FIGHT CLUB with his signature power punches, Jousce “Tito” Gonzalez (5-0, 5 KOs) of Glendora, CA added another knockout victory to his perfect record with an epic takedown of Monterey, Mexico’s Daniel Bastien (4-6, 1 KO). In the first seconds of the bout, Gonzalez sent his opponent to the mat with an accidental head-butt, and once again with a body shot. Finally, at the 2:59 mark of the first round, Bastien was sent down for good by way of a right hook in this lightweight fight scheduled for four rounds.

“I actually wish it went longer, I really wanted to get more rounds in!” said Jousce Gonzalez. “When I took the fight, I knew he had more ring experience, and had gone the distance with a couple of guys, so I was expecting to go the full rounds. Once I hurt him with the right hand uppercut that gave him the bloody nose, I couldn’t let him continue further-I had to stop him.”

Hovhannisyan vs. Carranza was an eight-round super bantamweight fight presented by Golden Boy Promotions and sponsored by Tecate “Born BOLD”, Casa Mexico Tequila, and Adriana’s Insurance. Mark your calendars and buy your tickets for the upcoming shows on July 14, August 10, September 1, October 6, November 3, and December 1.