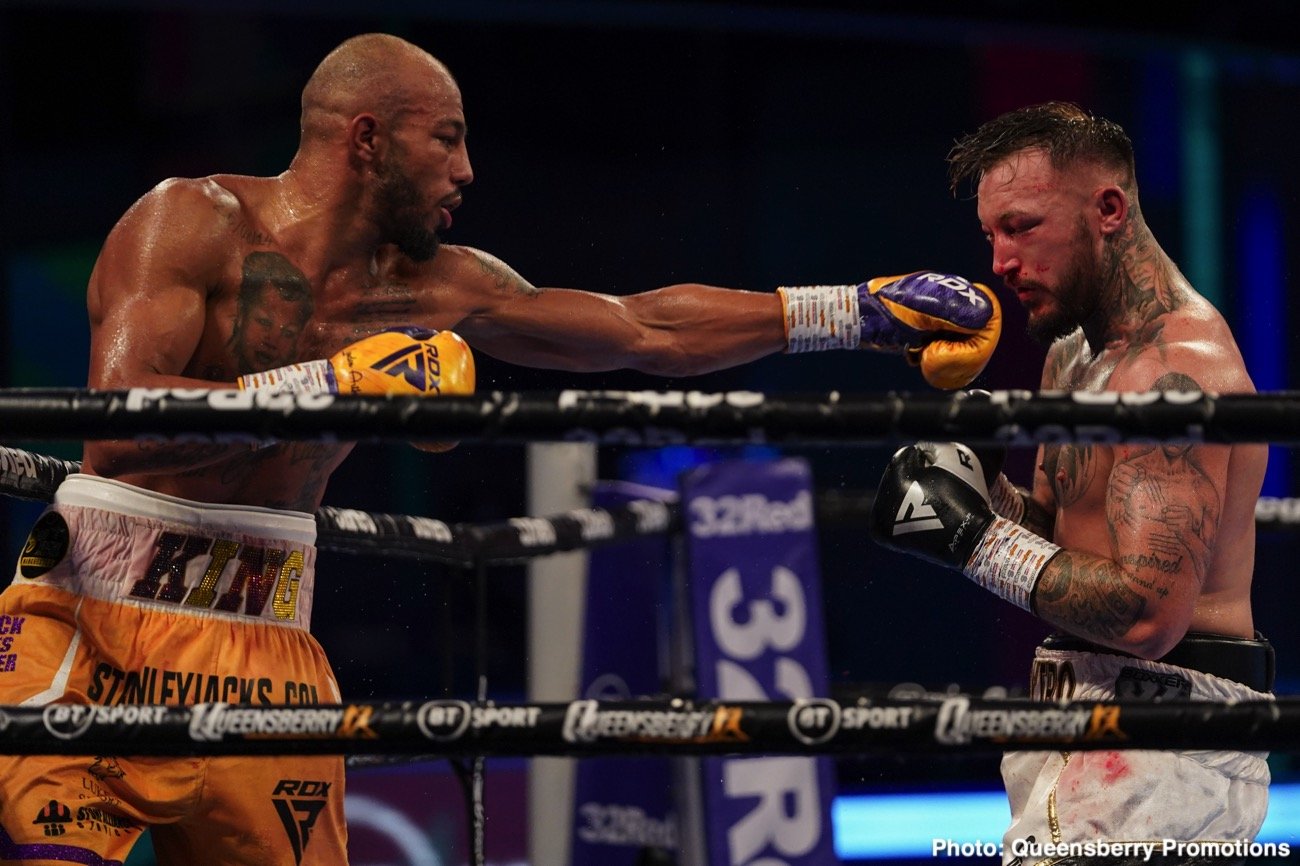 After a scorching British Friday where the mercury reached as high as 36 degrees, Queensberry Promotions were delighted to be back in the air-conditioned BT Sport Studios for another summer spectacle as boxing returned for the third installment of the post-Lockdown series.

In the main event, undefeated Mancunian Lyndon ‘King’ Arthur would seek to defend his Commonwealth crown against Scunthorpe slugger Dec Spelman – with the winner moving on to a mouthwatering domestic showdown with ‘The Beast’ Anthony Yarde.

Before we got to that, though, Belfast prospect Caoimhin Agyarko would take a step up against Jez Smith in a ten-round Middleweight contest. Everton Red Triangle trio Andrew Cain, Brad Strand, and Nick Ball would make their first promotional outings for Queensberry Promotions.

Cain looked like he meant business from the off, opening up confidently with his hands down and stalking his opponent around the ring. The skinhead scouse lad would follow that game plan throughout the first round, walking his man down and trying to land heavy left hooks when openings occurred.

In the second round, of a potential six, Cain started with a brutal barrage of punches that immediately backed up Blackpool’s Harrison. As the claret began to emerge from Ed Harrison’s nose, Cain continued to walk down his foe.

Round three started with heavy hooks hammering the head of Harrison, the left hook, in particular, proving to be a potent weapon for Cain. Harrison was game, throwing shots of his own, but the fight was starting to look like a beating. 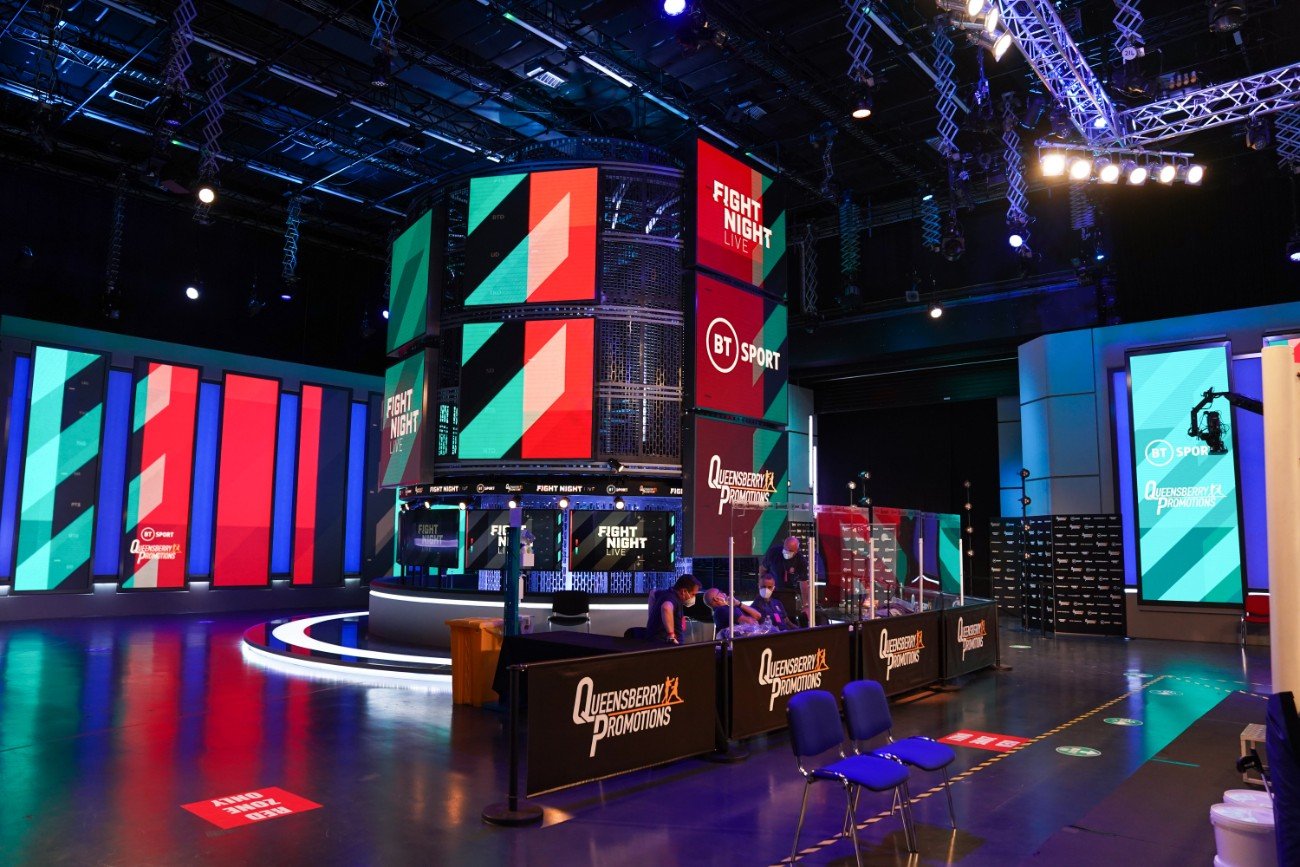 Tough-man Harrison saw out a torrid third round, but his corner ultimately decided to call the fight off before the fourth round could begin.

It was a wise decision, and a ferocious Andrew Cain – and his brutal left hook – improved to 6-0 with an impressive 6 KO’s.

In the second bout of the evening, Cain’s teammate and amateur standout Brad Strand had a tricky task in the shape of experienced campaigner Brett Fidoe.

Strand has had a reasonably struggle-free start to his professional career, and Fidoe would prove to be the fourth victim on Brad’s record but not before giving Strand the fight of his life.

Fidoe gave a good account of himself in the first, in what proved to be a competitive round. Strand did seem to be establishing his jab as the first came to a close, and by the second was using it to push back his opponent continually.

Fidoe has only been stopped once in over 80 contests, however, and he made sure to keep Strand on his toes throughout rounds three and four. Strand’s footwork and jab kept him elusive, though, and his class was on display for all to see.

Fidoe drew some blood on his young opponent but would ultimately fall to a 40-36 defeat. That didn’t tell the whole story, though, and the Bunce-christened’ best journeyman in Britain’ could leave the ring with his head held high.

Strand improved to 4-0 as a professional, with valuable lessons to take back to Liverpool with him.

Next up, unbeaten Belfast bruiser Caoimhin Agyarko would look to topple Jez Smith in a Middleweight cracker.

Agyarko entered the ring wearing a hoodie emblazoned with the slogan ‘BE REAL,’ and Jez Smith would soon realize that there are few things as real as Caoimhin’s power. Agyarko would land a series of punishing blows to Smith’s body in the first, eventually forcing Jez to cover up on the ropes as the round came to a close with a variety of different blows raining down on him from all angles. 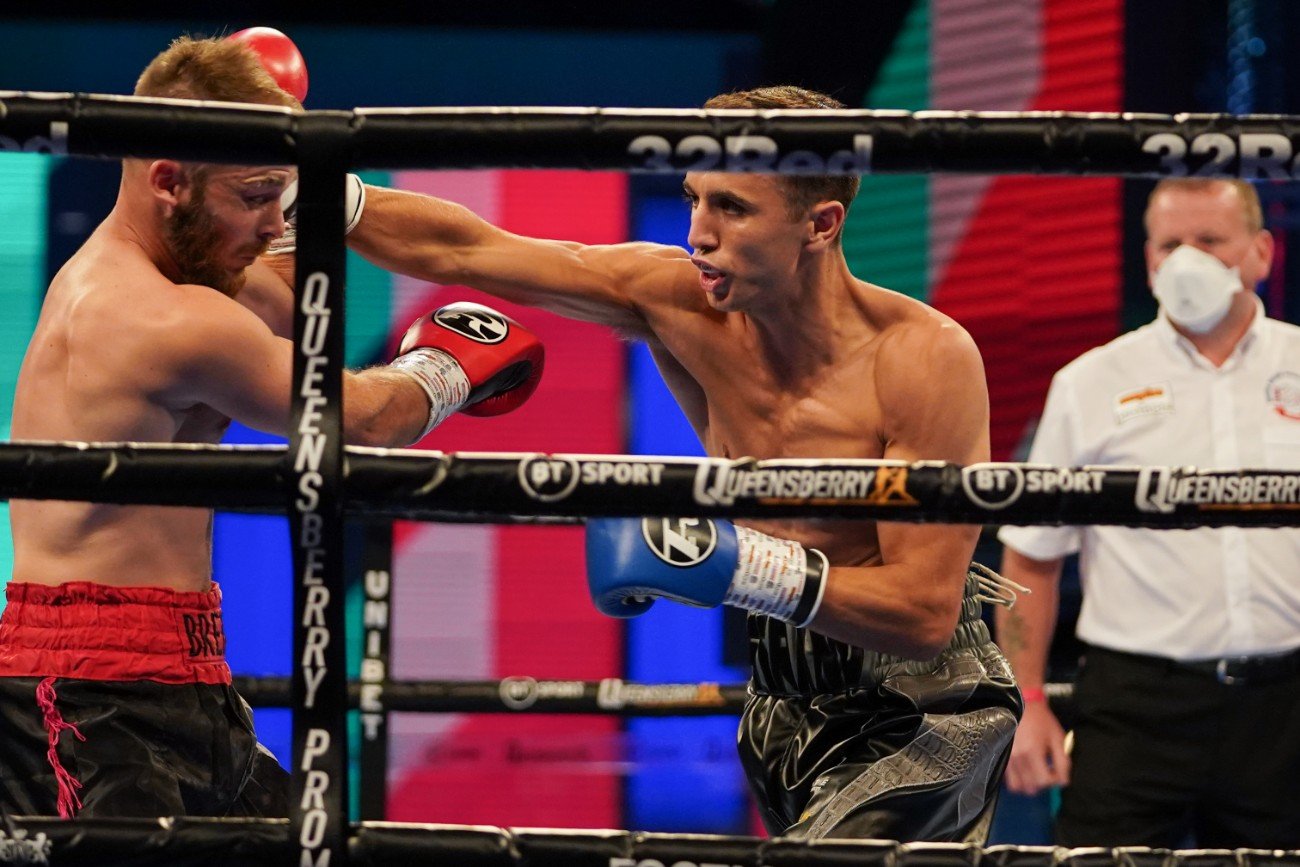 Smith began to find a home for his jab in the second, but arguably the more important work was still coming from Caoimhin, who continued to land some spiteful attacks from mid-range.

A competitive third round saw Smith land a few reliable right hands, but the bulk of the work was from Agyarko, who entered the fourth round confidently. Despite a right-hand livener from Smith, Agyarko soon swarmed his opponent. He was unable to finish his man, though, and they soon found themselves back in the center of the ring, swinging leather.

As the fifth round began, there was no doubt that both men were in the fight of their lives, and fans at home were settling in for another six shots of back-and-forth warfare.

That was precisely what they got in the fifth, but by the sixth, Caoimhin started to pull away as his power began to tell. Jez did land a big straight right hand of his own, but soon Agyarko was battering his man with hooks, uppercuts, and straights as Smith took solace in the ropes.

Smith spent more time on the ropes in the seventh, and Agyarko felled his man with a double right uppercut followed by a left hook to the body.

Jez Smith did see the eighth round, but the writing looked to be on the wall. Agyarko had his man down with another big shot to the body with forty seconds left on the ground, but Smith is a double-hard banger and amazingly survived the round.

It was Smith who opened the ninth with a series of shots of his own, but it was nothing more than a last gasp attempt to claw something back from the fight. And it wasn’t long before Agyarko dropped Jez with a big right hand, and the ref waved it off with two minutes left to go in the round.

It was a tough fight, perhaps more robust than he might have anticipated. Still, an impressive Caoimhin Agyarko improved to 7-0 and will move onwards and upwards in a stacked domestic Middleweight division.

In the penultimate bout of the evening, 12-0 Nick Ball met 6-0, Jerome Campbell, in a battle of two undefeated Super-Featherweight prospects.

Six of Ball’s twelve previous professional contests had not made it out of the second round, and that was clearly on his mind as he opened the fight like a buzzsaw. He swarmed Campbell relentlessly, and, despite being the shorter man, Ball repeatedly threw wide and wild shots to his opponent’s head. 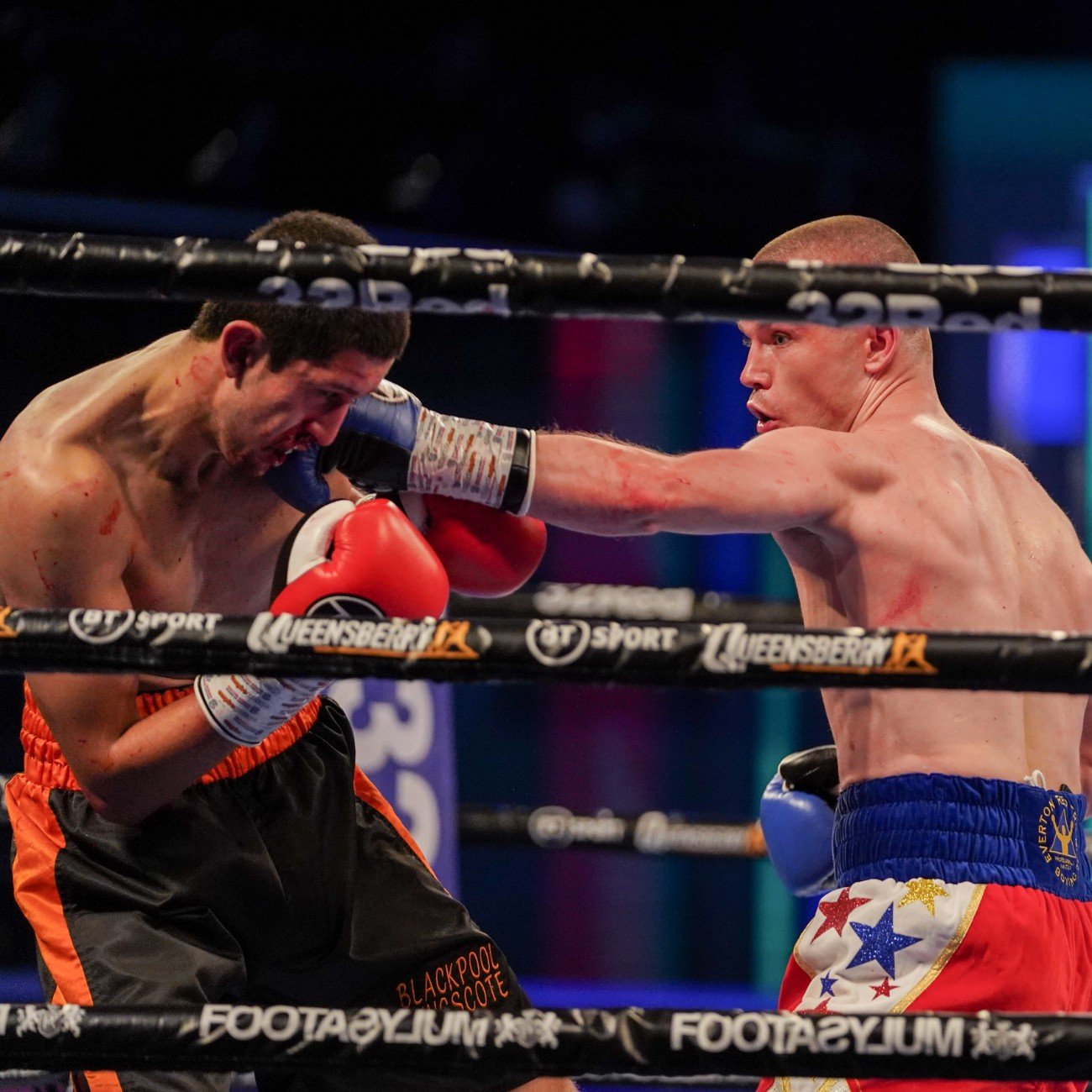 A brutal second round saw Campbell again pressed up against the ropes and eating wide, powerful shots, but the elusive early finish never came.

Campbell spent even more time against the ropes in the third, but as the round progressed, the pace slowed, and Jerome was able to ping back some shots of his own. He took that momentum into the fourth, which was a better round again for Campbell, but every time he stepped back onto the ropes, he’d allow Ball a gap to unleash one of his furious combinations.

The fifth and sixth followed a familiar pattern, and although Campbell did start to work his body shots well, Ball’s persistence and relentlessness were the stories of the fight.

In the seventh, Campbell held the center ring a little better, to begin with, but before long, Ball had his man down. With that, the Scouser smelt blood, and the final minute of the seventh round saw Ball headhunt a well-deserved finish.

It wasn’t to be though, and London’s Jerome Campbell was to, against all the odds, see the final round.

The eighth round came and went in typical fashion with Campbell being bashed up on the backfoot but surviving the onslaught to hear the final bell. It was just left to the referee to confirm a definitive 79-72 score in favor of Nick Ball.

Ruthless aggression was undoubtedly the defining trait of the Red Triangle trio on display tonight, and Ball capped off an excellent night for his team by improving his record to 13-0.

To the main event, then, where the Commonwealth crown would be contested between Lyndon ‘King’ Arthur and tough Scunthorpe man Dec Spelman. To the victor, the spoils, as they say, and the winner would look forward to a Commonwealth title, sure, but also a big money fight with superstar Anthony Yarde later in the year. 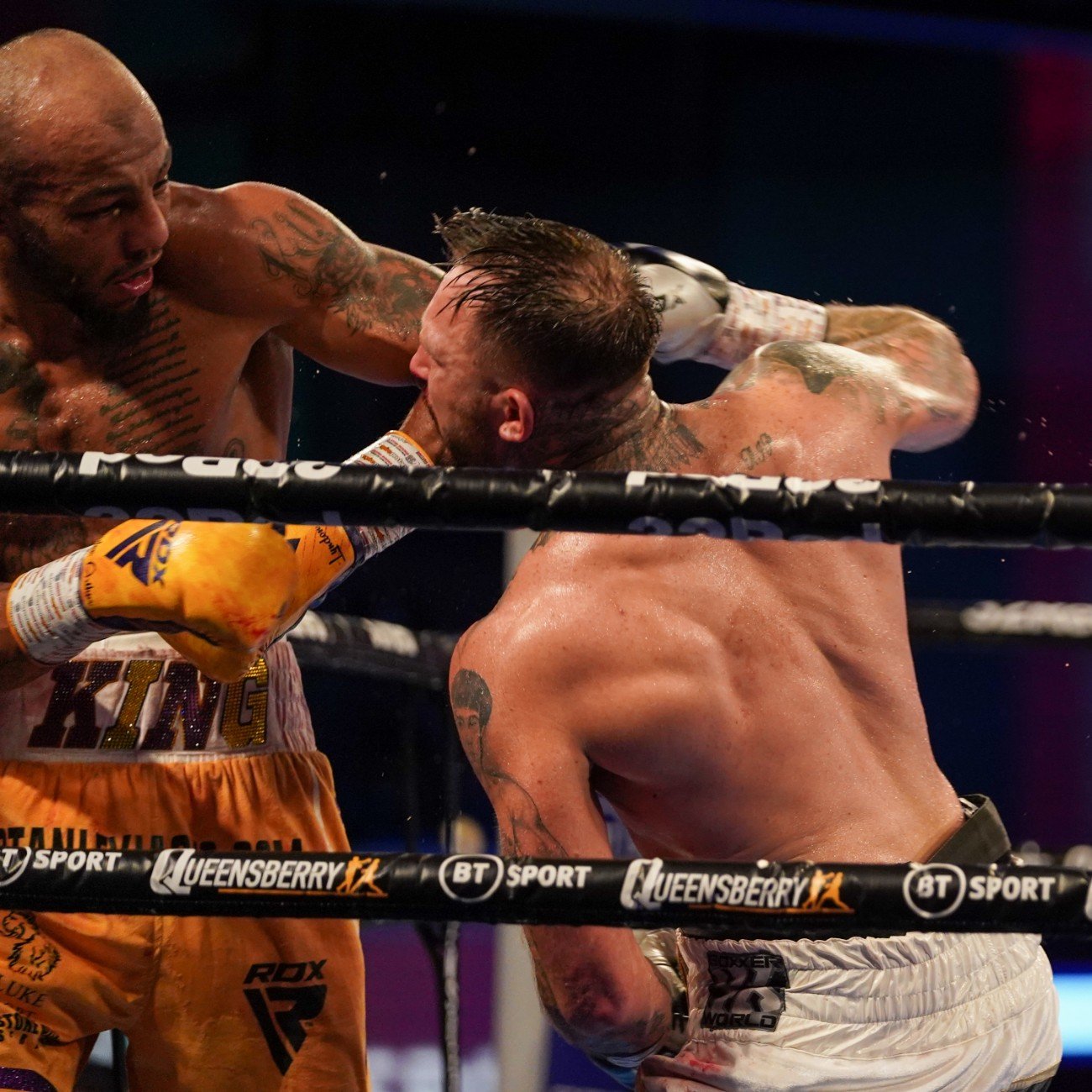 The opening round was evenly matched with Spelman pushing the pace on the front foot, and Arthur patiently waiting for an opportunity to land his patented right hand.

Spelman would continue to try to push Arthur backward through rounds two and three, but Arthur was boxing well and landing right jabs and uppercuts. As series three came to a close, the more actual work was coming from Arthur, and blood had appeared on the face of Spelman.

The fourth round was better for Spelman as he started to put his shots together well, with the straight right and left hook doing an excellent job for him. His right eye was beginning to swell, though, and looked like it could be a problem in the fifth.

Spelman worked hard in the fifth, but a solid right uppercut from Arthur showed his class, and he spent the round peppering the Scunthorpe man with stiff jabs. Spelman rallied to finish the series on top with a couple of decent shots.

Lyndon’s jab was equally potent in the sixth, and he spent the early stages of the round, holding his man back with the piston-like lead hand. Dec never looked in danger of slowing down, but the blood began to show as the round closed with a showboating Arthur pinging shots towards Spelman with confidence.

Round seven was another familiar tale of slickness versus industry and, though Spelman’s face told a story of woe, he did land a decent right hook to the body of Arthur that made the ‘King’ wince.

Round eight was another successful one for Arthur, whose quality continued to show over Spelman’s pressure.

Through rounds nine and ten, Spelman continued to work hard, but the gulf in class between the two men seemed only to grow as Arthur continued to box exquisitely off the back foot. Lyndon looked comfortable at all ranges and was hiding a dizzying area of bludgeoning shots behind more fantastic work with his jab. 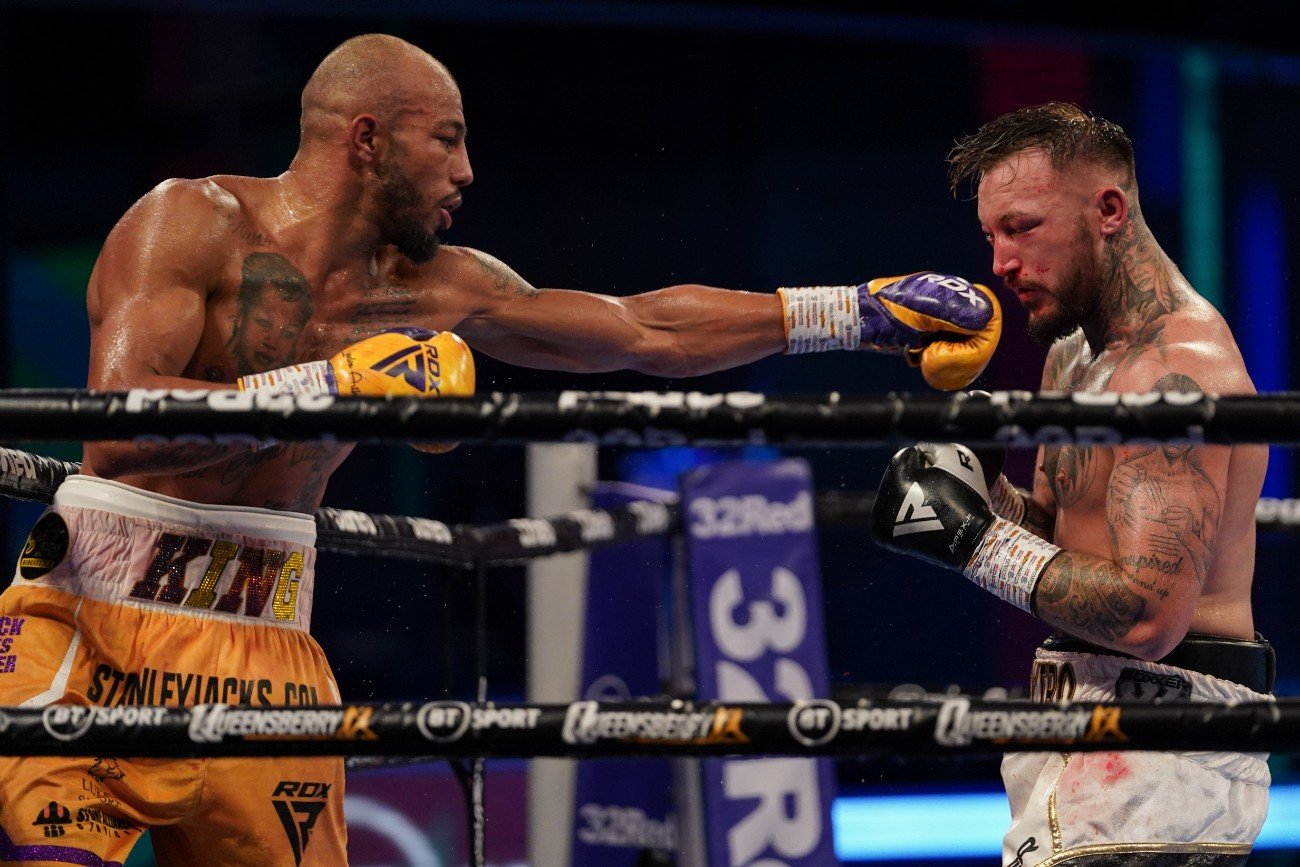 Characteristically, Spelman pressed the action in the eleventh, but there was a sensitive time running out for him to turn it around.

That would prove to be right in the final round, where Arthur summed up the fight as a whole by continuing to determine the pace with his solid jab and accurate array of power shots.

Bigger nights, and names, lay ahead for Arthur as Anthony Yarde is waiting just around the corner, but after an excellent, composed performance, there was the only thing left to say: Long live the ‘King.’