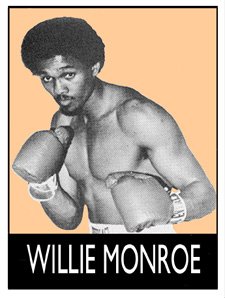 Our great sport lost one of the fine middleweight boxers over the weekend, as Philly’s Willie “The Worm” Monroe passed away on June 22 – He was 73 years of age- A slick, smooth and incredibly skilled boxer, Monroe is best known for his wholly deserved win over the legendary Marvin Hagler, who “The Worm” legitimately beat, on points over ten-rounds, at The Spectrum in March of 1976.

Born in Rochester, New York, Willie went pro in November of 1969, scoring a KO over a guy named Vince Neratka, who he fought at yet another legendary venue, this one being the Blue Horizon in Philadelphia. Monroe, tall for the weight, would remain unbeaten until he lost back-to-back decisions away from home, in Paris and in New Orleans, in 1972.

Part of the tough and hard middleweight rivalry that so captured the imagination of Philly fans throughout the 1970s, Monroe would fight Eugene “Cyclone” Hart, Bobby “Boogaloo” Watts and Hagler. Monroe beat Hart, lost to Watts, and then decisioned Hagler.

Never a big puncher, Monroe was instead a clever boxer, always well-conditioned and always willing to fight the best. Stopped just four times, twice by Hagler, once by David Love, and once, right at the end of his career, by Willie Edwards, Monroe walked away with a record of 39-10-1(26).

Fans may recall the segment of the superb 2007 documentary “Thrilla in Manila,” in which Marvis Frazier, speaking on the brutal third fight between his father Joe and Muhammad Ali, gave detail of how it was Monroe who was frantically trying to signal to him how Ali had asked Angelo Dundee to “cut ’em off” at the conclusion of that savage 14th-round. Willie had supposedly heard an exhausted Ali tell his trainer and corner-man that he was all in. How boxing history might have been different if Monroe had managed to speak with Frazier’s trainer Eddie Futch during those frantic few seconds.

As it is, Willie Monroe has his own place in boxing history.