The ring career of the great Thomas Hearns pretty much had it all: numerous epic super fights, an armful of world title wins, history-making wins, comebacks, some successful others not, and some of the most intense and thrilling rounds of boxing action ever seen. And Hearns’ career also boasts that rare thing: a double knockdown.

It was back in 1998 when Hearns, past his best yet still campaigning, now as a cruiserweight, this at age 40, met a game journeyman in the form of Jay Snyder. The fight took place at the legendary Joe Louis Arena in Detroit and an army of “Hitman” fans and admirers showed up to see how much Hearns had left. It turned out the fans got a short and sweet, yet pretty memorable, fight. Snyder, game but woefully outclassed, was 19-5 and he had been in with Ralf Rocchigiani, challenging him for his WBO cruiserweight belt, this in 1996. Snyder gave it a go here too, but he was stopped in the fourth round. 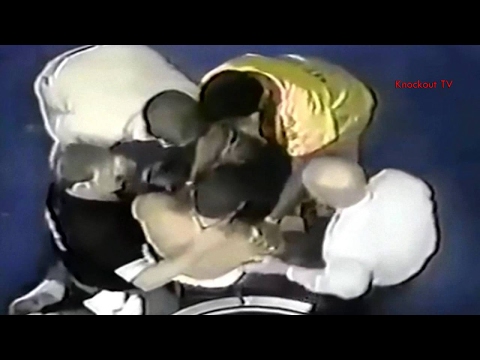 Since then, Snyder of South Carolina had fought three times and he had been knocked out three times. Hearns was four fights, all wins into his latest comeback and he was an amazing 57-4-1 overall. Hearns was all business against the aggressive but limited Snyder but he was arguably close to being left majorly embarrassed. Hearns let loose with a devastating “Hitman” right hand that landed smack, bang on Snyder’s chin, yet a split second before he had been cracked, Snyder had landed a stiff left jab to Hearns’ chin, and what do you know, both men hit the mat, at the exact same time!

Hearns was at least a little hurt and it’s a good thing Snyder had not tagged him with a more solid punch. Snyder, though, was out cold, laid on his back and gone. Hearns steadied himself before jumping back up and laying a glare on his beaten opponent. Double knockdowns are of course very rare in the sport, even more so when a superstar fighter is in action.

Imagine how stunning this particular fight would have been had Snyder AND Hearns been badly hurt, unable to continue after being hit and sent to the canvas simultaneously! Thankfully it didn’t happen. Hearns had picked up his 45th KO win and he carried on with his comeback. Snyder fought just once more before hanging up the gloves. Great referee Mills Lane worked the Hearns-Snyder fight, this the last bout Mills would ever work.