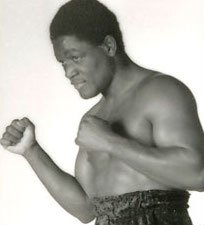 Jimmie Sykes, a fighter who contributed plenty to the Philadelphia fight scene in the 1970s and 1980s, passed away last week at the age of 67. Fans who are familiar with Sykes (photo:phillyboxinghistory.com) will know how he fully deserves to be listed among the tough, talented and fearless Philly fighters (Sykes being yet another warrior who helped make that fighting city so legendary; even if he never scaled the heights of the more well known Philadelphia greats).

Going pro in September of 1971, the “hard-punching fire plug hit his stride in the early 1980s after a shaky start the decade before,” as Sykes’ bio on the site Philly Boxing History reads. Fighting mostly at middleweight but also up at light-heavyweight – and even as a heavyweight – Sykes lost his first two; being stopped by light-heavyweight Tom Kocan and then by heavyweight Bill Sharkey. Two wins over fighters with losing records later, Sykes went in with a 6-0(5) Gerry Cooney. Sykes, at 5’8,” was fighting at an incredible height and weight disadvantage and he was taken out in a round in New York.

Sykes had far better success in Philly whilst fighting at middleweight. Sykes had a great run in the early ’80s, winning seven on the spin with one draw at one point. During this spell, Sykes defeated “Bad” Bennie Briscoe via decision in a fight held at The Blue Horizon. Briscoe retired afterwards. After giving future world champ Sumbu Kalambay all he could handle in dropping an eight-round decision (Kalambay, in the Ring Magazine feature “Best I Faced” ranks Sykes as the best chin he ever fought – “he was unbelievable,” Kalambay said), Sykes smashed a 16-0 Steve Traitz Jr by KO to win the USA Pennsylvania State middleweight title in a fight held at The Spectrum.

Sykes was then outgunned and stopped by Frank “The Animal” Fletcher, by Doug DeWitt and, in his final fight in December of ’84, Andre Cooper. Sykes finished at 13-11-1(9) overall. He was a far better fighter than these numbers suggest. Members of the Philadelphia fight fraternity are currently paying their respects to Jimmie.