Disturbing and shocking news has surfaced regarding the quite shocking condition boxing great Wilfredo Gomez was found in yesterday in his homeland of Puerto Rico. According to reports from RingTV and NY Fights, 65 year old Gomez was rescued from “inhumane conditions,” with the all-time great being taken away from his dilapidated home by paramedics and police officers.

Gomez, looking unrecognisable, bearded, bloated and dishevelled, with some signs of bruising on his legs, had lost contact with concerned members of his family some months ago and the authorities were notified. Apparently, Gomez’ estranged wife, along with former boxing champ Victor Callejas, asked the authorities to investigate Gomez’ home in the town of Cupey. The house was found to be in a terrible state; dirty and unkempt. Reportedly, the women Gomez had been living with (who has not been officially named) threatened police with a gun before finally allowing them in to attend to the stricken former world champion. 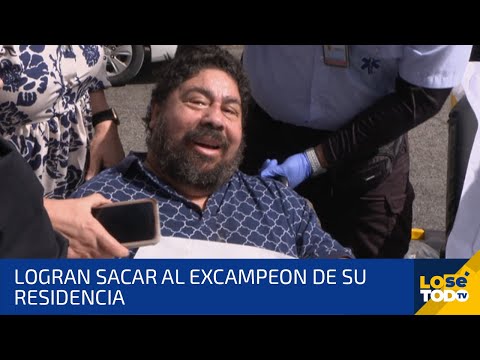 Gomez, who slurs his words (and did do even as a much younger man, this the result of a punch to the throat that he took in the later stages of his ring career) is now getting treatment in a psychiatric institution. We all hope Gomez recovers and can then go on to live out the remainder of his years with dignity and with happiness.

A superb fighter in his day, Gomez, 44-3(42) ruled the world at super-bantamweight as well as at featherweight, and he had destructive punching power. Gomez engaged in legendary battles with the likes of Carlos Zarate, Salvador Sanchez, Lupe Pintor, Juan LaPorte, and Azumah Nelson.

Only Sanchez (TKO8), Nelson (KO11) and Alfredo Layne (TKO9, this near the end of Gomez’ long career) ever beat “Bazooka.” While Gomez, who went pro in November of 1974, this in Panama, was held to a draw in his debut. In 2003, Ring Magazine named Gomez their 13th hardest ever puncher.

Again, let’s all hope this great champion gets all the help he needs and that he makes a full recovery.