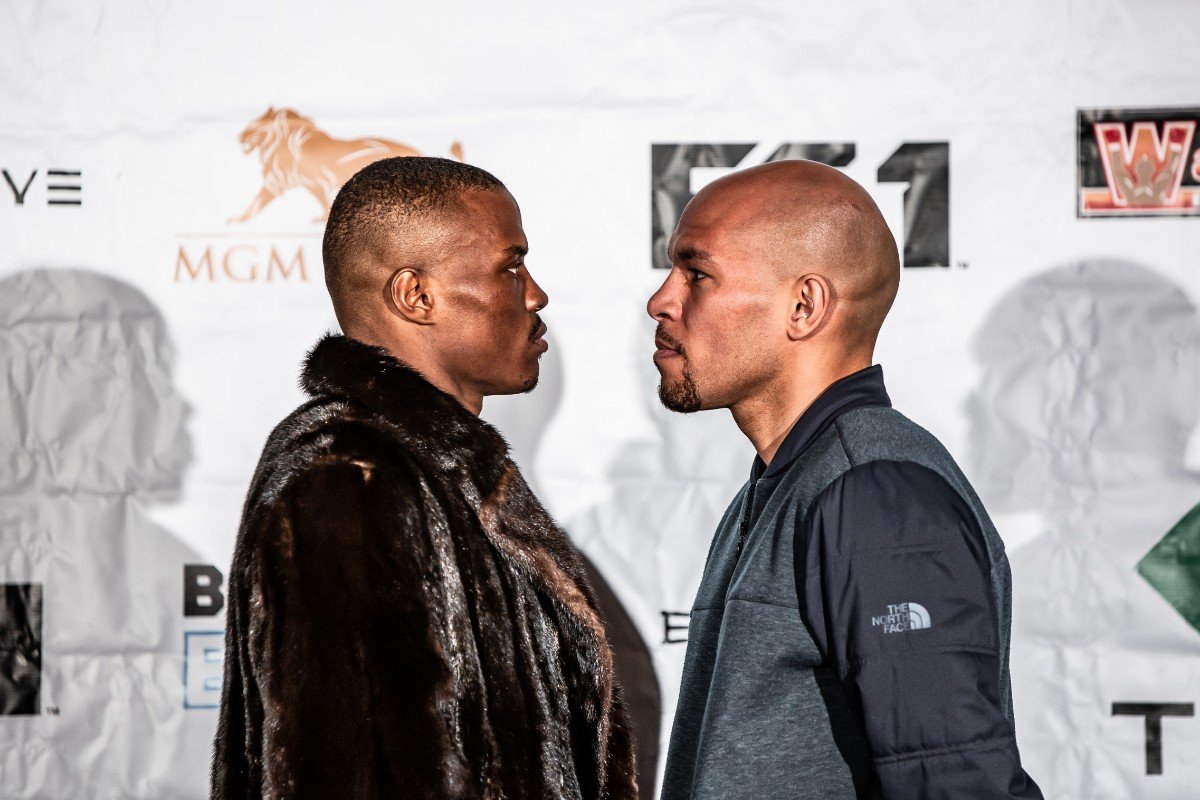 Also in attendance at the press conference were top middleweight contender Sergiy Derevyanchenko and Jack Culcay, who battle in an IBF Middleweight Title Eliminator, and sensational prospect Joey Spencer, who takes on Osias Vasquez to kick off the telecast beginning at 10 p.m. ET/7 p.m. PT.

Tickets for the event, which is promoted by Warriors Boxing and TGB Promotions, are on sale now, and can be purchased at the Armory at http://ArmoryMN.com/ and through Ticketmaster.

Here is what the press conference participants had to say Thursday from the Generals Hall at The Armory:

“I’m here to put on a great fight. That’s what we worked so hard to do on Saturday night. I’m excited to showcase my talents on FS1 and FOX Deportes and make a statement at super middleweight.

Read:  Triller Sinks to a New Low with Their Latest Fight Club Event

“My wife just had a daughter, and that’s been my biggest motivation all training camp. I’m fighting for my family, not just myself. I’m hoping to inspire people who see my story and realize it’s not just about the fight, but about what we’re fighting for. I’m here to spread a positive message.

“When we’re in that ring, all I’m going to see is Caleb Truax, nothing else matters. I’m very fortunate to be here and have the chance to display my skills. He has to look good in front of his fans, and I’m just here to give the fans a good fight. There’s no pressure to do anything extra.

“The weather here kind of reminds me of back home in Grand Rapids, Michigan. Going to new cities is kind of like having new places to conquer. I’m here with the right mindset that Minnesota is going to be a place I’m remembered and that I’ll have a great memory from.

“When I sparred Caleb I remember I knocked his headgear off and it flew across the ring, that’s the only thing I really remember from that. I knew our paths could eventually cross. I’ve had my eye on him and I was really happy for him when he won his title. I have a feeling we’re going to combine for a great fight.

“I have a very determined opponent and I’m fighting in his backyard. It’s a tough fight for both of us. I have to put my authority down on this fight and control it. It’s going to be hard with all his fans in there, but what I’ve always done is take negative circumstances, and turn them into positives.”

“I’m excited for Saturday night. It’s a big fight and important for me that I’m in the main event and in a title eliminator. I’m looking to earn a chance at another title and I know that I have to take care of business on Saturday to get there.

“I’m looking forward to sharing the ring with Peter Quillin, a guy I’ve known and respected for a while. He’s accomplished a lot. I think that our styles are really going to clash and give the fans a lot of action and drama.

“Peter and I sparred a long time ago, back in 2012. I came away feeling confident that if we ever fought, I’d be able to get the job done. I don’t remember much of the specifics, but I felt confident from the experience. At the same time, I’m expecting an even better Peter Quillin on Saturday night and that’s what I trained for.

“I’ve tried to train a little bit smarter for this one. I need to focus more on recovery at this point in my career. I’ve had pretty much the same team around me for a while now. We do the old school training and work hard every day.

“The stakes are high for this fight. Whoever wins hopefully gets a crack at the title. It’s going to be tough for the loser to bounce back. If I want to keep fighting I have to leave Saturday with my hand raised.

“It’s a thrill to be in this fight and have it here at The Armory in front of my hometown fans. I saw the support that (fellow Minnesota-native) Jamal James got for his last fight, and I’m expecting more of that on Saturday. It’s going to be special and I’m going to take advantage.”

“I’m happy to be here for this world title elimination fight. This fight is important for my career to get back to where I want to go and to show what I am capable of.

“On Saturday night I’m going to put on a really good show and give the fans a beautiful fight. Everyone knows I always bring action and great technical skill. I am confident that I will be victorious on Saturday and go on to win a world championship.”

“It’s nice to be here and I’m very thankful for this opportunity against Derevyanchenko. It’s a great honor for me to be in this fight against one of the best middleweights in the world. This the step that I was looking to take in my career.

“I’ve been sparring with Caleb Truax, and I feel it’s gotten me completely ready for this challenge. I’m going to show it in the ring on Saturday night. It’s going to be a lot of action and a lot of skill in the ring.”

Read:  Jaron Ennis: 'Whatever Crawford thinks he can do I can do better'

“I’m really excited to be fighting on this card headlined by Peter Quillin and Caleb Truax. I want to thank everyone for the support, both my fans and my team for everything that’s gotten me here. We’ve worked really hard every day in training camp and I can’t wait to put on a show.

“The Armory is a great venue with great energy. I’ve fought here before and I’m looking forward to coming out and putting on another great performance for this Minneapolis crowd.”

“I’m excited to welcome everyone back to the latest PBC fight night at the armory. Those who have come to the previous shows have noticed that the crowds have gotten larger and larger. These shows are generating great excitement and Saturday is another example of a card loaded with elite fighters.

“It’s really a terrific treat to be promoting this card. It should be a great night of boxing for everyone at The Armory and watching on FS1 or FOX Deportes. This card is stacked from top to bottom and is set to deliver from start to finish.”