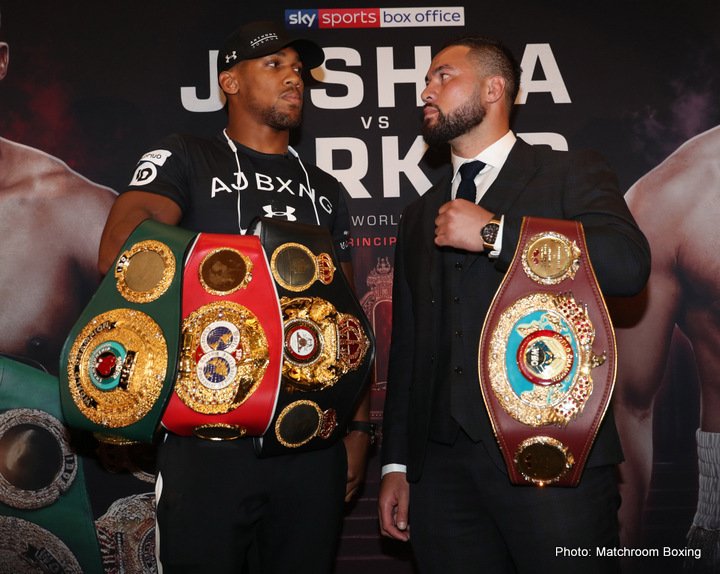 “Through the first six months of this year we will be delivering 11 marquee events, which includes matchups of five top-ranked fighters, of which this is one, and two unifications, of course which this is one. In this month of March all four heavyweight world title belts are at stake on SHOWTIME.

“This fight, Joshua vs. Parker, will be the 12th heavyweight fight on SHOWTIME within the last three years. We’re proud to be doing our part to help propel the reinvigoration of the heavyweight division. During those last three years the U.S. audience has gotten to know a little bit about Anthony Joshua and we are very happy to be able to further introduce them to Joseph Parker, the consensus top three heavyweight in the world and WBO Champion making his third defense and his first appearance on SHOWTIME.

“We are thrilled to have this fight; it’s right in our wheelhouse, a highly competitive, highly anticipated matchup of top fighters.”

Joseph Parker: “It’s been a great training camp that we’ve had in Las Vegas and now we’re here in London. We have about a week and a half before the fight and like Kevin mentioned, we hit the ground running. We got some good sessions in. I’m looking forward to fighting an undefeated fighter like Anthony Joshua, who I respect. I’m looking forward to this opportunity to unify the division and unify the belts and the opportunity to put on a great display and make my mark on SHOWTIME. I can’t wait for it. Our team is excited to be here and it’s going to be a great opportunity for us.”

Q: When you watch the struggles Joshua had against Klitschko, what do you take away from that fight?

Parker: “I think being active has worked well for us. I watched that fight. He did really well in terms of coming back and showed a lot of heart to get back up off the canvas and finish off the fight and getting the win. Coming into this fight, we’re young, we’re hungry and I think if we did get him in trouble there’s no waiting for us. We know how to finish off a fight. We know how to put on the pressure and get him out of there. He has strengths and weaknesses like every other fighter has and we’ll come up with a good game plan which I believe in and if I execute, I think we’ll get the victory.”

Q: There’s so much attention paid to an Anthony Joshua-Deontay Wilder fight, as if it’s an assumption that he’s going to beat you. Does that bother you?

Q: As a fan of boxing, how good is a match like this for the sport?

Parker: “A match like this is a very big deal. As a fan of boxing and as a fighter, we love to watch the big fights and be involved in the big fights. So we’re pretty happy to be involved in the fight. I think it’s the best time for us to be involved in a big fight like this. Back a few years ago, Kevin said he’s always wanted to fight Anthony Joshua and he said to me, when we do fight this guy, it has to mean something. And it does really mean something this time. We’re both undefeated, we both have titles, we’re both world champions and we both want to unify the division so it’s going to mean a lot and it’s a big occasion.”

Q: A lot of fans don’t know you in the United States, explain to them what you will bring to the table on March 31.

Parker: “The fans haven’t really seen the best Joseph Parker there is. Going into this fight, we’ve worked on a lot of things. Like I said, I trust in my whole team. I trust in my coach and the game plan. I’m going to bring a lot of movement, speed and power and a lot of angles. I promise that this is a fight that I’m going to make very exciting.”

Q: What was the reason behind losing weight heading into this fight?

Barry: “Joe’s still a very young heavyweight. We’ve been together for five years and we’re still a long way away from a finished product. Last year, we bumped Joe up quite a bit. We put a bunch of muscle on him. We put an extra 10 pounds of weight on him and it actually doesn’t really work out for us. So we sat down, Joe and I, and we said that we felt he was a busier fighter, a more mobile fighter, his feet and hands were faster, when he was lighter. So for a fight like this against a big, strong, powerful guy like Joshua it was important that we went back to a mobile, lighter fighter.”

Q: Do you think Joshua and Eddie Hearn saw something the rest of the world didn’t see in your fight against Hughie Fury, which wasn’t your best performance?

Parker: “Last year wasn’t our best year and I wasn’t close to what we can actually do in the ring. They probably saw a lot of things that they could work on to get to us but we’re a totally different fighter now from where we were last year. We’ve improved on a lot of things and we’re going to show everyone what we’ve been working so hard on in Vegas.”

Q: What would it mean to you to become the unified heavyweight champion?

Q: Are you concerned that if the fight goes to the scorecards you won’t get a fair shake because of Joshua’s popularity in Great Britain?

Parker: “I’m not concerned and the reason I say that is because we have good officials. My team has done a great job to get neutral officials and my focus is on the fight. I want to go out there and do my best. Whatever happens, happens. But I trust that the officials will do the right thing and give the right decision.”

Barry: ”It was very important for us when we were formulating this contract that we had independent, neutral officials. We have three judges – one from the United States, one from the UK and one from New Zealand. And we have an Italian referee so we’re very happy with the names that have been put forward that there will be no disputing the decision. We believe that we have fair, very experienced officials who will do a good job come Saturday the 31st.”

Q: Do you think Joshua is underestimating you based on what they saw in that fight against Fury?

Parker: “I think on that performance, they are underestimating us and I think a lot of people are already writing us off because of that performance. But, like I said, we’ve worked on a lot of things and we had a great camp and it’s going to be a different fight as you guys will see March 31. If they’re judging us off that fight, then they’ve got it totally wrong. That could definitely work in our favor.”

Barry: “I think the same will go for both camps. If they’re looking at the Fury fight, we know that Joseph is a much better fighter than that. Fury was a very awkward opponent, an opponent that we wouldn’t have even been in the ring with if it wasn’t for a mandatory. Looking at Joshua’s last fight with Carlos Takam, he really didn’t light the world on fire in that fight and he left a lot of question marks about his performance. We’re expecting a much better Joshua than the one that fought Carlos Takam. So the same can be said both ways.”

Q: What did you think of Joshua’s performance against Takam?

Parker: “It wasn’t his best effort but he did what he had to do to get the victory. Maybe training with someone who was a lot taller and then fighting somebody shorter changed the way that he approached the fight but I think the main thing is that he got the victory and he kept the belts and that’s why we can make this big fight happen.”

Q: What do you think your advantages are over Joshua?

Parker: “I’ve been 12 rounds five times so I’m durable. With this training camp that we’ve had, we’ve worked a lot on different angles and speed. What we’ve been seeing in the gym and in sparring, we’re going to put on display come fight night. I think I have advantages in speed and power. If we execute it well on fight night then he won’t be able to catch us and he won’t be able to land that big shot that he throws.”

Barry: “Speed is the key. We’ve always believed that Joe’s the fastest heavyweight in the world. I also believe that out of all the heavyweight champions, I think Joe has the better skill. I think he does things better than Joshua does. I think he’s more complete than Joshua. Is he as big as Joshua? No. Is his reach as long as Joshua’s? No. Joshua’s got a 100 percent knockout record but I believe Joseph Parker is a better skilled fighter than Antony Joshua and I think when we put the movement, the hand speed and the skill together, it’s going to be a very good combination and a successful combination on March 31.”

Q: Do you want to make a prediction for the fight?

Q: Do you think that Joshua’s chin is a big weakness for him?

Barry: “I think he has a pretty good chin. I know that we used the glass door as part of our marketing strategy in putting this fight together, but we believe as a team that Joshua has a good chin. He’s fought some big guys. He’s been hit on the chin before. Sure, he got dropped against Klitschko and there were stories of him getting dropped multiple times in the amateurs and that he was dropped in the gym in sparring, but all in all he’s a big, strong, powerful guy and I think his chin is not too bad.”

Barry (Opening Comments): “We’ve been in the gym running each morning at 6:30, 7:00 and in the boxing gym at 2:30. We’ve been doing between 16 and 18 rounds of boxing each day. Today we sparred and Joe is looking very sharp, very confident and the little bit of jet lag that we had is getting less and less by the day and we anticipate by this weekend we’ll have both feet firmly planted on the ground ready for a big week next week.”