Manny Pacquiao wasn’t giving WBA Super World welterweight champion Yordenis Ugas any credit for his win last Saturday night by blaming the loss on having leg cramps rather than due to the skill of the talented former Cuban amateur champion.

The 42-year-old Pacquiao (62-8-2, 39 KOs) was not giving Ugas the credit he deserved for his fine win last Saturday, and it isn’t very reassuring.

Pacquiao thinks he would have beaten Ugas had his legs been working like earlier in his career.

It would have been two years since Pacquiao had last fought, and he didn’t look great against Keith Thurman in terms of his mobility.

Is Pacquiao a sore loser?

“In my entire career, Ugas was one of the easiest opponents,” said Pacquiao to The Athletics. “He only had one style, and I should have been able to easily move away.

“You’ve seen how I’ve moved in my fights before. I couldn’t move in this fight. My legs just stopped,” said Pacquiao in options not to give Ugas any credit for his win.

The lack of humility for Pacquiao is troubling, to say the least. Normally, when a fighter is beaten, they show humility to their conqueror rather than giving them the back of their hand.

Pacquiao isn’t handling his loss well in believing that his defeat was solely based on his lack of mobility rather than other factors.

If there was a way of taking Ugas back in a time machine to 2009 to face the same version of Pacquiao that knocked out Ricky Hatton and Miguel Cotto, chances are he would have beaten him during that time as well.

Yordenis would have been unloading on Pacquiao with right hands no matter how much movement he used, and his superior power would have given the Filipino star fits at any point in his career.

Pacquiao didn’t react well each time Ugas would hit him hard with a body shot, and that’s something he would have been able to do even if he was battling a moving target.

Did Pacquiao deserve the win?

“My initial reaction was, and it was during the fight. Pacquiao early on was winning but not looking very sharp,” said Dan Rafael to Boxing Social on Pacquiao’s loss to Ugas.

“In my story, I said he [Pacquiao] kind of looked ragged. I think you can make the argument that he won closely, but obviously, the judges like Ugas with the power in the right hand and the jabbing that he was doing.

“He fought a good fight. It wasn’t a particularly exciting fight. It was starts and stops. It was not the most entertaining Manny Pacquiao fight I’ve ever seen, but from Ugas’ point of view, it was a masterpiece.

“He did what he had to do; he toppled a legend, taking the fight on 11 days’ notice switching up the opponents. I’ve always liked Ugas as a fighter.

“I’ve always looked at him as even though he didn’t have that big name, he could certainly fit in and mix and match against any of the well-known fighters such as Pacquiao, Errol Spence, or Terence Crawford, Danny Garcia, Keith Thurman, Porter.

“Those top names, but he fits there in terms of ability and his talent, and he showed it. You know a lot of people thought he beat Porter.

“So now he has an official win against Manny and a controversial loss against Porter. He’s a top-three welterweight, a top-four welterweight, no question,” said Rafael of Ugas.

I don’t think scarcely anyone saw Pacquiao doing enough to get the win, but if this were scored as an amateur contest, yeah, he’d probably win.

Pacquiao’s punches were too light for him to rate a win over Ugas, and that was what the judges saw. They gave it to Ugas because he was landing the much harder blows that knocked Manny off balance.

Rematch is possible for Pacquiao

“They didn’t say specifically, but I’d be very shocked if Pacquiao doesn’t have a right to a rematch,” said Rafael.

“I kind of doubt it, but if Manny exercises the rematch clause, that would probably be next. It could depend a lot on how this pay-per-view did and if there’s a feeling with his team if this is the right thing.

“But that’s for him to decide. If there is no rematch, I guess the Spence fight could be next [for Yordenis]. That’s a unification fight.

“Spence was supposed to fight Pacquiao. Ugas did fight Pacquiao and beat him, so that’s a good match-up [Spence vs. Ugas]. I don’t know if it’s the sexiest fight for the public.

“You remember it’s a business also. As a pay-per-view, who knows? I can see that happening. They’re both with PBC, and it’s a unification, and they fight with good styles.

“It’s a tough loss [for Pacquiao]. This is all he’s known for in 26 years. He’s got his life as a senator, but his overriding thing in his life has been professional boxing.

“I think he knows in his mind and in his heart that even if he does fight again, it’s an uphill battle.

“When you’re that age, and you come off a two-year layoff, and you fight a guy like Ugas or any top fighter in the weight class, you’re no longer guaranteed a win anymore.

A rematch with Yordenis is certainly possible for Pacquiao, and he doesn’t need a rematch clause to get it. Ugas openly volunteered to give Pacquiao a rematch earlier on Wednesday, saying it’ll be an “honor” to fight the boxing legend again.

Pacquiao needs to decide whether he wants to chance it in a second fight with Ugas because he could lose again.

Rafael says he had Pacquiao winning, but he’s out there on the margins as one of the few people in boxing that saw him beating Ugas. 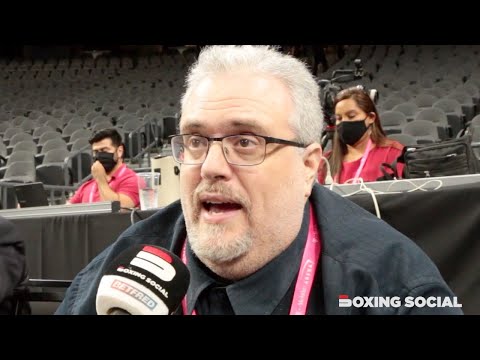