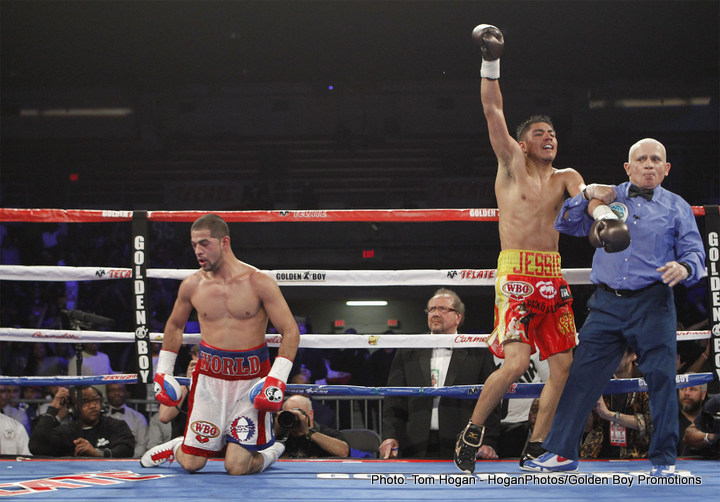 “I tore him apart piece by piece,” Vargas said. “I was patient. I looked for openings and when I had the openings I fired the shots. This is what I have been working for all my life since I was eigth-years-old. Now I’m a two-time world champion.”

“Before the fight I felt really strong,” Ali said. “I felt very confident and sometimes that isn’t enough. I need to go back to the drawing board and make sure to correct the mistakes that I made in the ring tonight. I’m going to come back better than ever.”

WBA Interim Heavyweight World Champion Luis “King Kong” Ortiz (25-0, 22 KOs) continued his rapid descent up the heavyweight division, knocking Tony “The Tiger” Thompson (40-7, 27 KOs) down twice before finishing him with a huge knockout in the sixth round.

The main event topped a massive night of boxing on HBO Boxing After Dark® at the D.C. Armory, in Washington D.C.in front crowd of 4,585.

Ortiz came out strong, knocking down Thompson with an overhand left in the first round, sending Thompson to the canvas again in the third round before putting him down for good mid-way through the sixth.

“I’m hungry and ready for any champion. Let’s do it,” Ortiz said. “I’m a serious guy, boxing is my job, my passion and I’m committed 100 percent. I work, I train, I spend time with my family. That’s all I do. I look to destroy my opponent in the ring and let my fists do the talking.”

“He is strong as advertised,” Thompson said. “It’s sad that my hometown got to see me at the end of my career versus at the peak of my career. I just think it would have been a much better fight with prime Tony Thompson, but the guy is as strong as a monster. Thanks to all the fans that came to support.”

With the WBC Interim Featherweight World Championshipon the line, Oscar Escandon (25-2, 17 KOs) and Robinson “Robin Hood” Castellanos (21-11, 13 KOs) waged a bloody, brutal war over seven rounds. In a back-and-forth battle, Castellanos knocked Escandon down with a sharp uppercut in the second, but Escandon beat the count, got off the deck and started breaking down Castellanos over the ensuing rounds. Escandon opened up a cut over Castellanos’ eye in the fourth and an accidental head butt led to a river of blood pouring from Castellanos’ nose. At the end of the seventh, Escandon landed a body shot that knocked out Castellanos.

“I feel very happy about this victory it’s been a long time coming and I’m very proud to take the title back to my country,” Escandon said. “Robinson is a very tough guy; he came to fight, but my training camp showed in this event. I’ve been trying very hard, sacrificing a lot to be at this stage if my career, including spending time with my family. When I was dropped the first time…I realized that I needed to fight with more intelligence to make sure I secured this victory.”

“I’m very disappointed but I gave it my all,” Castellanos said. “I felt like I fought with a lot of heart and that’s really all you can do. Unfortunately the outcome wasn’t what I personally wanted but I respect Oscar. He’s a good fighter he was very fast and caught me with some good shots. He has a big heart, and I wish him the best.”

Opening up the international broadcast, hometown favorite Lamont Roach, Jr. (10-0, 3 KOs), shined in a tough, eight-round battle against Jesus Lule (8-16-1, 1 KO). Roach, a lightweight prospect, had Lule reeling on numerous occasions with some outstanding work to the head and body and took home the victory by unanimous decision.

“I feel very good — didn’t get the knock-out, but it still feels good to get the decision,” Roach Jr. said. “He was a tough guy, we expect them to always to be tough that’s what we train for. I’m looking forward to staying busy this year and moving up in rounds.”

“By the beginning of the second round I knew I had him and it was only a matter of time,” Ballard said. “It’s been three years since I fought here, coming back and fighting in front of my hometown is very rewarding.”

“I felt like I put on a good performance tonight,” Ochoa said. “The fighter was tough, but I was in control the whole time. This fight really helped me shake off the rust and now I started 2016 with a great victory.”

Hometown favorite Kevin “K-Smoove” Rivers (13-1, 10 KOs) got back on the winning track with a strong performance against Angel Aispuro (6-4-2, 3 KOs). Rivers, a strong featherweight prospect, battered his opponent around the ring for the better part of all six rounds until opening a massive cut on Aispuro’s ear that led the ringside doctor to wave the fight off, giving Rivers a technical knockout victory in the final round.

“I felt very strong and prepared for this fight,” Rivers said. “I felt like I had a lot to prove tonight and my goal was to secure a victory in front of my hometown. Not only did I do that tonight but I also put on a good show and made my hometown proud.”

In the evening’s second bout, highly regard lightweight prospect Damon Allen (9-0 3 KOs) showed his Philadelphia roots, standing in and trading with a game Daniel Perales (6-4-1, 4 KOs) throughout the six-round bout. The fight went to the scorecards, and Allen earned a unanimous shutout decision.

“The guy was tough, he kept coming and wouldn’t give,” Allen said. “I like fights like that; they challenge me to be better and think on how to overcome a tough opponent. I think that if the fight was scheduled for more rounds I would have gotten the knockout, but I am glad with the decision.”

The opening bout saw an action-packed, seesaw affair with light heavyweights Todd Unthank-May (9-0, 3 KOs) and Alexander “The Great” Johnson (16-4, 7 KOs) exchanging shots throughout the six-round affair. Unthank-May cut Johnson in the first, and dropped him in both the second and third round before Johnson landed a huge shot to turn the tide. The two fighters went toe-to-toe until the final bell, with Unthank-May earning a unanimous decision.

“I felt a little rusty, but that is normal,” Unthank-May said. “I know I could have done a little better but I am happy I got the win. I came here to win and looking forward to fighting more this year. Now being part of Golden Boy I feel like a real pro and I know great things are going to come my way.”