Some fights, whether they are billed as Super Fights or whether they are just plain old, shall we say, garden variety match-ups, are tough to watch. One fight that was dubbed a Super Fight, albeit one in the form of a match-up that was looked at by most as an absurd pairing, grabbed the attention of the whole boxing world on this day in December back in 2008. Oscar De La Hoya, a genuine superstar who had smashed many a pay-per-view record, a fighter who had won multiple world titles and had also banked many millions of dollars, met emerging superstar Manny Pacquiao.

It was to many a mismatch; with the naturally bigger De La Hoya being an overwhelming favourite over Pac Man. De La Hoya had won titles all the way from 130 to 154 pounds, while Pacquiao had won his first world title all the way down at flyweight. Manny Pacquiao had moved up through the weights since then, of course, yet he had fought above the 130 pound limit just the one time. Surely the fight – the brainchild of Larry Merchant – would result in one big, commanding win for Oscar? 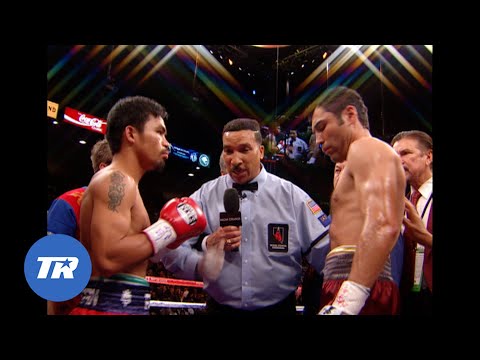 The fight sold out within a record time; the live gate success handsomely matched, indeed surpassed, by the pay-per-view numbers the fight pulled in. And the fight did turn out to be a gross mismatch, only not in the way fans thought it would.

Fighting at welterweight – Oscar weighing-in at 145 pounds, Manny going up from 135 to tip-in at 142 – the two future Hall of Famers shocked us all, for different reasons.

De La Hoya, who had hired a legendary training duo in the form of Angelo Dundee and Nacho Beristain, appeared to be disturbingly emaciated at the opening bell; this after rehydrating after the weigh-in. Oscar looked shockingly frail and weak, and as the fight wore on, he looked even worse. Pacquiao, with his blinding speed and zinging power, was administering a beating to De La Hoya. And it wasn’t long before the fight so many fans had been looking forward to became something that was disturbing to watch.

De La Hoya, who had proven his greatness in a number of fights, had nothing. Nada. Zero. De La Hoya was a sitting duck, one with no chance of winning. Pacquiao busted De La Hoya up, he raked his foe’s head around with stinging punches that were thrown from multiple angles, and Pac Man showed no remorse.

Trained by Freddie Roach, the Filipino southpaw dynamo was beating De La Hoya to the punch, he was outmanoeuvring him, he was throwing and landing so much more leather. Pac Man was utterly dominating the fight from every which way. It was, for the millions of De La Hoya fans, as sad as it was glorious for the millions of Pacquiao fans.

In the end, De La Hoya had no choice, he was pulled out on his stool after the eight most brutally one-sided rounds of his entire career. Pacquiao was the new superstar, the man to watch, the new PPV king.

You could call it a passing of the torch if you wish. It was arguably the most utterly one-sided drubbing ever seen in a so-called Super Fight.