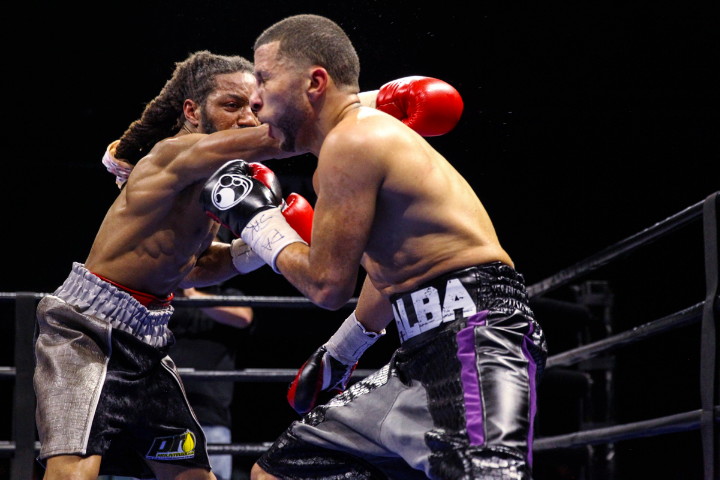 Douglas started to turn up the heat up in round two as he landed two hard left hooks that stopped De Alba in his tracks. De Alba was able to gain confidence in round three, as he was able to counter effectively against Douglas.

Round five had the best two-way action of the first half of the fight with both guys digging deep to gain an advantage. Douglas seemed to get the better of the exchanges as he landed the harder combinations. Douglas began to take over the middle rounds and in round eight, a left hook rocked De Alba and put him in danger for this first time in the fight.

The two fought hard down the stretch and excited the crowd with Douglas winning in the end by majority decision by scores of 97-93, 96-94 and 95-95.

Cruz was dominant throughout the fight and in round four he rocked Green with a left hook that had his opponent stumbling into the corner. In round seven, Cruz landed a perfect right and left hook that put Green down.

Sensing his moment, Cruz quickly finished the deal with two hard lefts that forced referee Benjy Esteves to stop the fight at 1:32 of round seven. Cruz’s power punches proved to be most dangerous as he connected on 46 percent of them.

Brooker controlled most of the action and came out with a strong first round landing some solid punches in close on Hall. In round five, Brooker landed a solid combination that sent Hall back to the ropes and had him in trouble. He was far more accurate throughout the night, landing 49 percent of his total punches and 53 percent of his power punches.

In his strongest moment of the fight in round seven, Brooker landed a perfect right on the chin that drew a big reaction from crowd. The judges scored the fight 80-72 and 79-73 twice all for Brooker.

“I feel great. I got some great rounds. The judges might have made it a little bit closer than it really was. But I went into his hometown and did what I do.

“He was about as tough as my last fight. The only thing tougher than the last one was that I had to come here on the road and do it.

“This builds me. It makes me a better fighter. I had a great opportunity tonight and I jumped on it. I feel like I’m the better fighter and tonight I proved it.”

“It was a very competitive fight. I think I landed more punches. He was more aggressive, but I was landing more.

“This is boxing. I just come here to put on a show for the great fans. I thought I won the fight. I knew I beat him inside.”

“It was a great fight, he was a tough opponent who was very agile and mobile. I had to be patient and it was great to get those rounds. I’m coming for the 147-pound division.

“I was definitely trying to break him down slowly. He was mobile, but I didn’t expect him to be so quick.

“I was hurting him every time I hit him and I finally got him out of there.”

“The hits to the back of the head were the problem. I wanted the ref to do something about it but that’s what hurt me. I never recovered from it.

“I felt like I was frustrating him and out-boxing him. But I never recovered from that blow.”

“It was a good fight. He’s a good boxer, but I had to keep it rough. He has some good experience that kicked in, but my will, my heart and my training kicked in too.

“My loss is what got me motivated for this performance. No more setbacks, only get backs.”

“I tried to work, We were working in there. I wasn’t surprised by anything. It was a good fight.

“I pushed myself. We got in there and fought. There’s no excuses. We’re going back to work.”