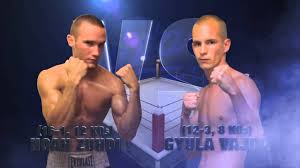 In front of a packed house last night at the Lucky Star Casino in Oklahoma, WBU Lightweight Champion Noah Zuhdi did not disappoint the partisan crowd as he knocked out clever counter-puncher Gyula Vajda in the second round to defend his championship.

Zuhdi (17-1, 13 KOs) came out strong and Vajda (12-4, 8 KOs) came out stubborn in the first stanza. In a lightening quick exchange in the center of the ring, Zuhdi followed up a jab with a thudding straight right, right as Vajda was trying to counter. The flash knockdown seem to only wake the Hungarian up, however. Vajda began fighting at a heightened sense and temporarily stunned Zuhdi with a counter left that the champion described as “the second hardest I’ve ever been hit with.”

Dickie Wood, Zuhdi’s trainer, explained afterward, “He just got away from the gameplan. That’s all it was. He wasn’t moving around enough. I did my best to set him straight and get him back on the right page, the gameplan. And he did.”

To his credit, Zuhdi stayed composed and did little to show any effects at the tailend of the first round. Sensing his opponent’s confidence growing, the champion stepped up the pace and became more aggressive early in the second round. The fireworks continued when Zuhdi threw an overhand, tomahawk-like right hand that severely rocked Vajda, leaving him nearly helpless on the ropes.

With the end near, Noah threw a vicious combination to send his opponent sprawling to the floor. Vajda tried to rise and failed once before finally standing up before the count of ten. But with Vajda out on his feet, the referee could not let it continue and correctly called it off, sealing Zuhdi’s first successful defense.

“You train for twelve,” Wood said, “But you hope for quick fights like this. Noah’s a disciplined fighter, a clean liver, takes care of himself, and he’s great to train. This is two exciting fights in a row and he’s still learning and improving.”

Zuhdi followed up, “I knew I had to do something quick in the second because I could see his demeanor change after the first knockdown. It was a great win. I give my opponent a lot of credit–he hit hard, he stayed in there, and he fought to get up (after getting knocked down). I’m happy with the result, but I’m looking forward to what’s next.”

What’s next for Zuhdi was the talk of insiders after the fight. Anyone between Oisin Fagan and a possibly returning Graham Earl was being mentioned for his next fight. Ricky Burns is always looming for lightweights, too, even if his dance card is full at the moment. Whoever is next, they will be facing a boxer-puncher who is coming into his own and has reinvigorated Oklahoma boxing.

-Catbox Entertainment’s other regular, super middleweight prospect Bo Gibbs soundly defeated Warren Walker when Walker did not answer the bell for Round Six. Gibbs moves his record up to 9-0.