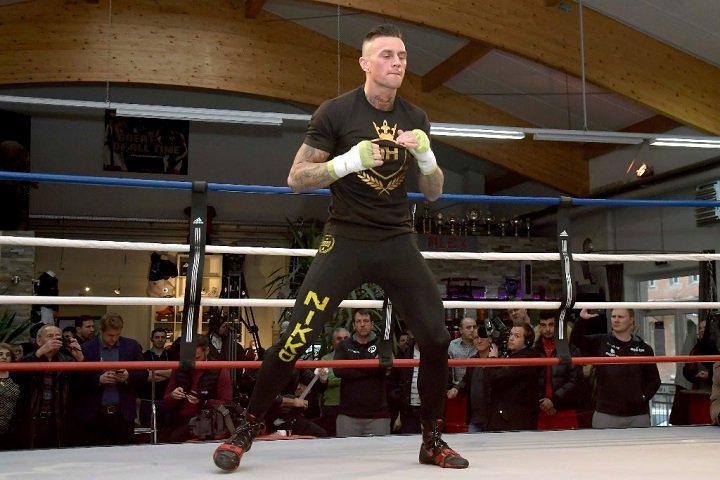 Nieky Holzken plans to gatecrash the World Boxing Super Series and secure his spot in the final when he faces the tournament’s number two seed Callum Smith on Saturday at the Arena Nürnberger Versicherung in Nuremberg, Germany.

The undefeated Dutch super middleweight and former world kickboxing champion joins the quest for the Ali Trophy at the semi-final stage following the withdrawal of veteran German fighter Juergen Braehmer through illness.

Having landed this dream opportunity, Holzken insists he is ready to take it “with both hands” to earn his place in the final opposite the WBA Super and newly crowned IBO World Super Middleweight Champion ‘Saint’ George Groves.

While he accepts his opponent the WBC Diamond Champion might not know much about him now, ‘The Natural’ from the Netherlands says Smith “will know much more about me after I hit him for the first time on Saturday”.

How does it feel to be part of the World Boxing Super Series?

“The World Boxing Super Series is a beautiful event. This is a big opportunity for me to perform on a big stage, but I’m used to fighting on a big stage from the other sports I have been involved in. I’ve been waiting for a chance like this for a long time, and now it has been handed to me, I will take it with both hands.”

Read:  Joshua reacts to £15m step aside deal reports, says no truth to it

What are your impressions of the tournament so far?

“I think it’s a very good tournament. I have seen all the fights in the super middleweight division. The last fight between Groves and Eubank Jr. was amazing. I like the super middleweight contenders; they are all strong and talented guys, good boxers with different styles. I was hoping for a chance to be a part of the tournament, and now I got it.”

What are your thoughts on joining the tournament at this late stage?

What do you consider to be your greatest strengths inside the ropes and what can we expect from you in Nuremberg on Saturday?

“People say that I am a good body puncher and that I have a good fighting heart. I know my strengths and the fans will see them on Saturday.”

You have competed across various disciplines, how will your skills and experience from kickboxing help you in the boxing ring?

“Kickboxers are known for their pressure and power, and always going for the KO. And that is what I have brought with me into boxing.”

Callum Smith has said he doesn’t know much about you; will that work to your advantage?

Read:  R.I.P Brian Hughes - “The Godfather of Manchester Boxing” Passes Away At 81

“Maybe. He knows nothing about me, and I know everything about him. However, one thing I for sure, he will know much more about me after I hit him for the first time on Saturday.”