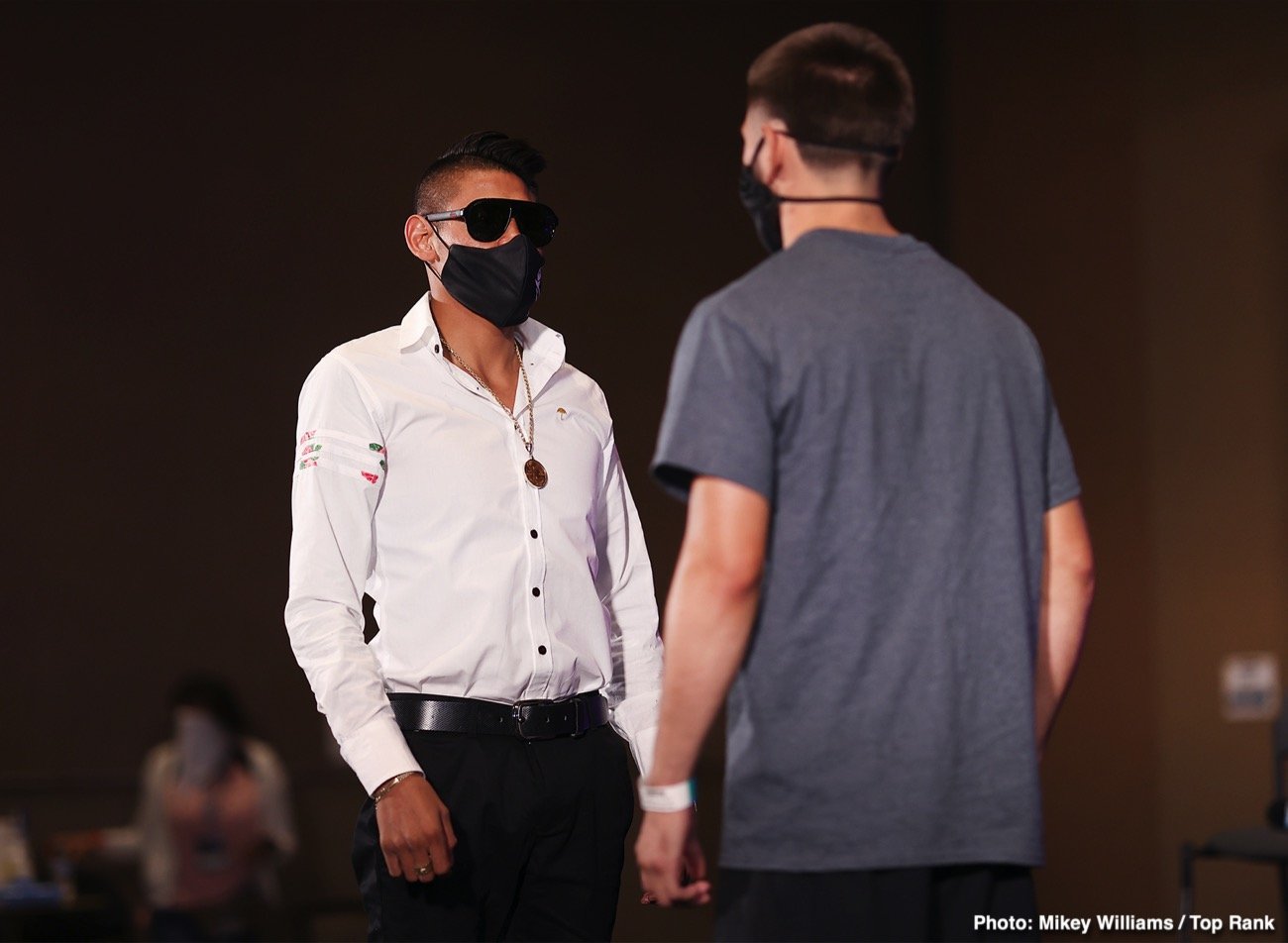 This Friday night former 122-pound titlist Emanuel Navarrete moves up in weight to challenge unbeaten contender Ruben Villa for a vacant WBO featherweight strap. As the saying goes styles makes fights and Friday’s matchup in the main event on ESPN should be an interesting clash. Does Ruben have enough power to gain the respect of Navarrete and will Emanuel actually use his sizable reach advantage? These questions as well as a few others that will be discussed in this preview and prediction article then answered once the opening bell rings.

Emanuel Navarrete was an unknown commodity back in December 2018 before he faced Isaac Dogboe for a WBO 122-pound belt. Dogboe had been impressive in victories over Jessie Magdaleno, Javier Nicolas Chacon, and Cesar Juarez. Navarrete started his bout with Dogboe by boxing on the outside using his long arms to fight at range. It didn’t take long for him to turn the tide on Dogboe putting him in an uncomfortable spot of being on the outside. Although a two-way scrap ensued, it was Navarrete who won clearly, also following up with a win in the rematch.

Since then though, the last 5 outings have been underwhelming from an opponent standpoint. At 31-1 with 27 KO’s it still feels like we haven’t seen the best of Navarrete yet. Adding to the sentiment that we haven’t seen much overall of what he is capable of the flip side is the holes he has that have been protected to an extent of late. Navarette’s work rate and gumption to engage is super fun to watch but will a skilled top level boxer be able to make him look ordinary? Emanual’s pressure and combination punching matched with his physical length could take the featherweight division by storm. It’s just as plausible we see him get exposed as an offense-only type of fighter who has been in tough with 1 guy.

A few items standout when watching Ruben Villa on tape or using Google to boxrec his record as a pro, but the biggest and most obvious is the lack of punching power with only 5 stoppages in 18 pro bouts. Ruben’s amateur pedigree is evident in his stance the way he’s on balance and able to move in any direction all the while ready to land a punch. Villa was 135-7 in the unpaid ranks even battling several well known boxers including Shakur Stevenson. Ruben has looked good in his last 4 fights as he moved from prospect to contender in search of a major opportunity. Now can he put it all together in his first title shot of his career?

Underneath the surface looking beyond just punching power, Villa has great footwork and upper body movement on defense. He has the ability to come forward or be on the outside is something he will have to implore a mix of on Friday night. Out of a southpaw stance Villa is very crafty and his timing will be a key for an aggressive opponent like Navarrete. Judging by some recent fights it appears that Villa has enough pop to land some with authority so getting hung up on his KO record could be a mistake.

This podcaster thinks we may see Navarrete begin the fight on the outside but it’s hard to imagine it will last more than a few rounds and even if it does I’m not sold it will be all that affective. Yes he does have a 72 to 66 ½ inch advantage but his defense is poor and seems to get worse when he’s on the back foot dodging incoming punches. The jab for both men will be a key weapon, for Villa it will help him establish a rhythm whether on the move or in the pocket closing the gap, whereas Navarrete’s jab would exploit a reach issue for Villa. Ruben’s timing will come in handy when Navarrete opens up in combinations and the times when Emanual tries to land shots from way too far away.

Time and time again it’s plain to see Navarrete throws punches from left field especially the upper cut, Ruben needs to seize those moments by using an angle and timing him with clean shots. As we know timing can neutralize speed but it also can make up for lack of real punching power, landing the shot Navarrete doesn’t see coming and/or is out of position for from overextending on an upper cut will slow his attack. Navarrete has to rely on punches in bunches and power to turn Villa tentative and unsure. If that doesn’t happen he will lose this fight.

Villa’s overall skill set will be on display and that fact that he has two legit game plans gives him a slight nudge in my book. By the way for those who care, Villa sits around a +180 to all the way up to +235 in some sports betting sites as the underdog. Someone could win this fight 7-5ish so a draw isn’t the worse idea as well. Clean lands and an escape route will be too much for Navarette if he doesn’t overwhelm Villa with work rate.

My Official Prediction is Ruben Villa by Majority-Decision