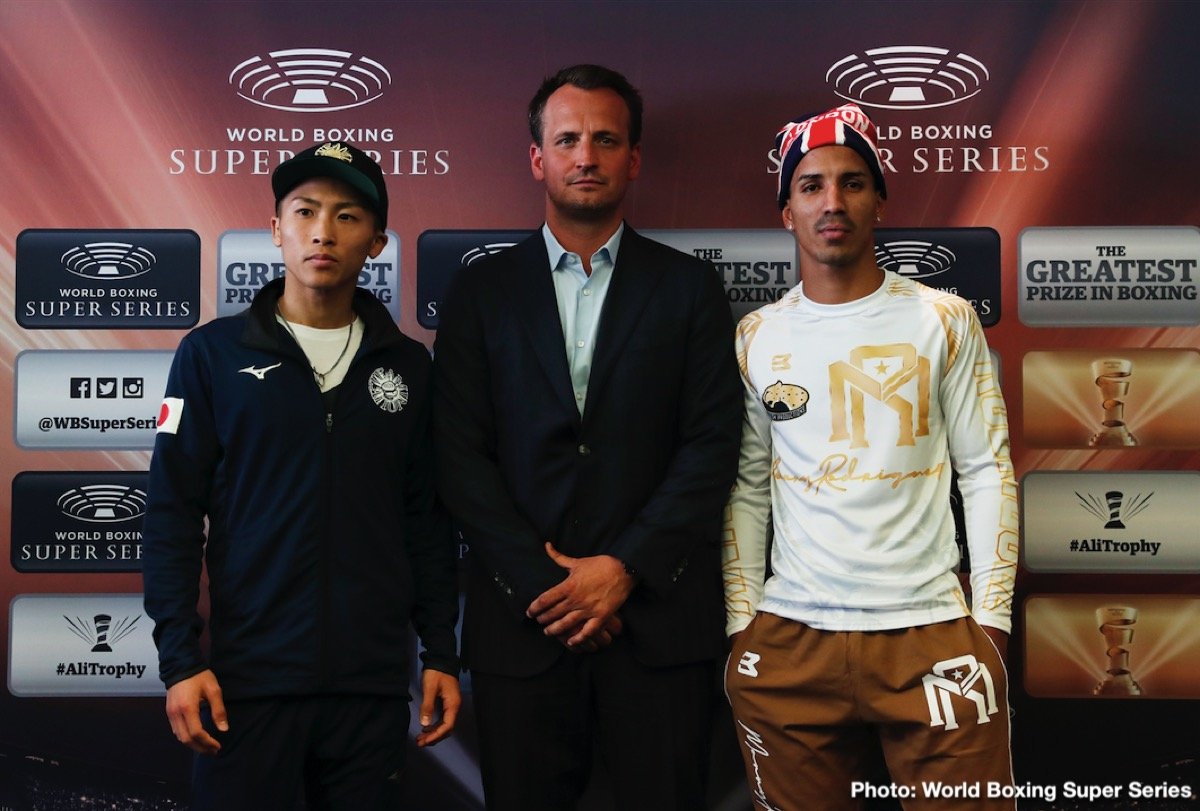 William Cruz, the trainer of IBF champ Emmanuel Rodriguez, explains why he pushed Naoya Inoue’s trainer at the media workout for Saturday’s WBSS bantamweight semi-final at The SSE Hydro in Glasgow.

“Team Inoue think they will beat us, and there is a lot of fans thinking ‘Manny’ will lose,” said Cruz. “But on May 18 Emmanuel Rodriguez will still be unbeaten. He will still be Puerto Rico’s world champion. For the ones who don’t believe it, you’ll see!”

The 28-year-old trainer, who has been with Rodriguez for five months, caused controversy when he pushed Shingo Inoue, Nagoya Inoue’s trainer-father, at Tuesday’s media workout.

“I don’t have a problem with the press doing their job,” said Cruz. “But Team Inoue was there watching and filming us training. So I played my part and put myself in front of them to make them stop filming. That’s the way it is.”

“As soon as ‘Manny’ arrived they started to look at him with an attitude to intimidate him. We didn’t come here to play. We came here to make them respect us. This is a war and it will end with our hand up. On Saturday people will see that the ‘Monster’ it’s not Inoue, it’s Rodriguez!”

“I trust the plan that I have made with my new coach William,” Said Rodriguez. “We have good chemistry and the result will show. This will be the first time that I’m not the favorite in a fight, but the motivation is huge. We want to make sure Puerto Rico continues to shine in boxing.”

Things got heated between Team Inoue and Team Rodriguez at Tuesday’s workout ahead of Saturday’s sensational WBSS semi-finals at the SSE Hydro; Naoya Inoue vs. Emmanuel Rodriguez and Josh Taylor vs Ivan Baranchyk.

A member of Rodriguez’s team pushed Inoue’s father and trainer, Shingo Inoue when he was taking photos of the Puerto Rican IBF titleholder who performed his training with renowned coach Freddie Roach.

“It was an open workout so naturally I was taking pictures and using the phone. A guy came over, after staring down at us from the ring, and said I couldn’t do it and pushed me aside. That was very ungentlemanlike,” said Shingo Inoue after his son’s workout.

“The two fighters who have actually trained for this that’s what we are here to see and who is the better fighter. Outside of the ring, nothing needs to be hostile.”

Tensions were running high, but Team Inoue is not going to use it as fuel in Saturday’s semi-final.

“I don’t think of those petty things and get emotional. It’s between Inoue and Rodriguez and that’s what they are here for. Let them work it out,” concluded The Ring Magazine’s ‘2018 Trainer of the Year’.

Team Rodriguez didn’t stay to watch Inoue’s workout, but the champion himself was in a good and talkative mood after his session. And he made it clear that he is in Scotland to make a statement.

“We are going to shut some mouths,” said Rodriguez referring to Inoue being called the favourite by press and boxing fans. “I am going to take it round by round and in the end, I will win either by KO or decision.”

Naoya Inoue didn’t see the incident with his father, but he was oozing self-confidence and fully focused on the task ahead of him.

“I am in great shape, I can’t wait for the fight. I am going to knockout Rodriguez on Saturday,” said the WBA champion. “I can’t predict the round, but I am going for the KO and it will happen sooner or later. I know what everyone is expecting from me.”

Tickets for the Monster WBSS Semi-Finals night, Ivan Baranchyk vs Josh Taylor and Naoya Inoue vs Emmanuel Rodriguez on 18 May at The SSE Hydro in Glasgow, Scotland are on sale now from TheSSEHydro.com