Today in Japan, “Monster” Naoya Inoue put on a simply flawless performance in stopping a game Nonito Donaire in their anticipated return bout. Inoue, defending his WBA and IBF bantamweight titles and looking to take Donaire’s WBC strap, struck at the end of the opening round, his big right hand slamming into Donaire’s chin and sending him down in a heap.

Donaire, never short on heart and guts, got back up and made it through the fading seconds of the round, yet the end was soon in coming. Inoue badly wobbled Donaite’s legs with a brutal left hand to the head soon after round two began, and then the younger man opened up in ruthless fashion. Another left hand upstairs had Donaire in dire trouble, his legs totally gone. Then, stuck in a corner, Donaire was the victim of some further head shot bombs, the final left sending him down. The referee, Michael Griffin, stopped it. Time was 1:24 of round two.

Inoue, now holder of all but one of the major belts at bantamweight, improves to 23-0(20). Former champ at numerous weights Donaire falls to 42-7(20).

The first fight between Inoue and Donaire, in November of 2019, was a classic, and a tough fight for both men. Today’s fight was a slaughter. Inoue, looking even faster and even more powerful here in 2022, seemed to ever so slightly trouble Donaire with a right hand that proceeded the knockdown and then Inoue caught Donaire with a shot the 39 year old did not see, this the big right and down Nonito went.

The second round was awesome to watch, for two reasons: the sheer speed and frightening power of “The Monster,” and the raw courage and bravery of Donaire. In short, no man had ever done to Donaire what Inoue did to him today. Donaire, showing real class in defeat, waving to the fans, may now decide to retire and of course he is more than entitled to do so. As for Inoue, he really does look to be undebatable, unstoppable.

Who is there for Inoue to fight at bantamweight? It seems Inoue will have to move up in weight once again if he is to get any real challenges. Inoue really was flawless today. He may be the best fighter in the world, pound-for-pound. 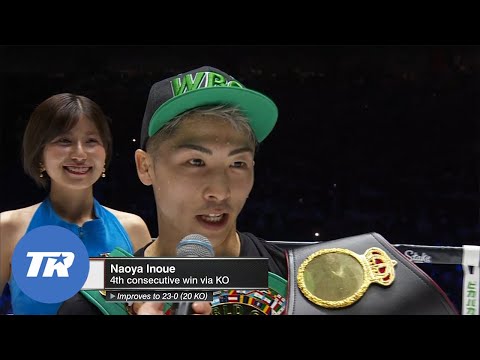