It wasn’t much of a fight, not at all – yet the world saw just how super-fast a peaking Muhammad Ali was on this day back in 1966. Fighting in London for the second time in less than three months, Ali (still being called Cassius Clay by far too many people) met an admittedly grossly over-matched challenger in the form of Brian London. Ali was making the fifth defence of the heavyweight crown he had won by shocking the world in February of 1964 when he defeated Sonny Liston, and he was coming off a repeat win over Henry Cooper.

Cooper had famously dropped the 21 year old Clay with his vaunted left hook, this in their 1963 non-title fight, and “Our Enery” had been looked at as a serious challenger for Ali in the rematch. Not so London. Ali dominated the short fight, winning inside three rounds. Ali took just a single punch during the entire fight, this a jab from his 32 year old foe. 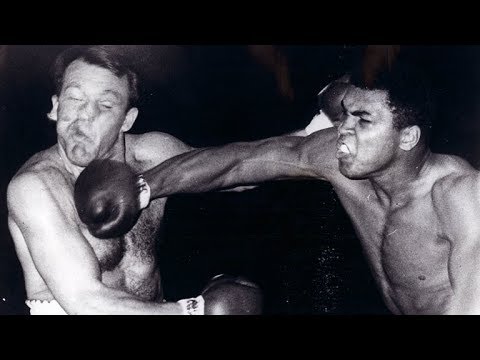 But as poor as the fight was, the speed Ali showed, of his hands especially, was mesmerising. After two clear rounds that went to the champion, Ali closed the show in round three. Pinning London on the ropes, Ali let loose with a 12-punch combination, his laser-like handiwork being fired out in a three-second blur. London crumpled to the floor, Ali having only put his weight behind one or two of the punches.

The world had never before seen such speed from a heavyweight. And it never would again. Something else the world never saw was Ali at his absolute physical peak. Stripped of the title and banned from boxing in 1967, this due to his refusal to serve in the Vietnam War, the 25 year old Ali was at this time adding muscle to his frame. Ali was also gaining additional experience, while his sheer confidence was something no rival fighter could come close to interfering with. Years later, trainer Angelo Dundee spoke passionately about the real, honest to goodness crying shame it was that the world never got to see Ali at his very best. If Ali was untouchable at the age of 22, 23, 24 and 25, which he no doubt was, just imagine how super-great he would have been at age 26, 27, 28.

And Ali was always willing to take on all comers, all possible challengers. But he was running out of suitable ones even before the US government moved in. The rest is history; the world’s fight fans had to wait until 1970 before they saw Ali return to the ring (this after a three-year and seven-month exile).

Just imagine if you can, one of today’s heavyweights throwing 12 punches in a mere 3 seconds!