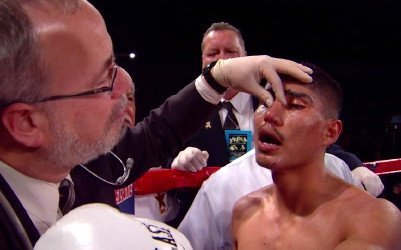 By Joseph Herron – After many months of eagerly anticipating his first world title opportunity, 25 year old Mikey Garcia (31-0, 26 KOs) captured the WBO Featherweight Championship by defeating the widely recognized number one ranked 126 pound fighter in the world, Orlando Salido (39-12-2, 27 KOs), by way of an eight round unanimous technical decision.

Unfortunately for those in attendance, the judges’ verdict was forced prematurely and the action was ceased after only eight stanzas had materialized because of an accidental headbutt that inadvertently broke the nose of Mikey Garcia.

During the closing seconds of the eighth round, Orlando Salido lunged in while attempting to land an overhand right, which was followed by a forehead shot that bludgeoned the snout of the young title challenger. Although the vicious butt was deemed unintentional, the fight was ultimately stopped after referee Benjee Esteves, Jr. followed the recommendation of the physician at ringside.

The three judges at ringside scored the eight rounds of action, 79-70 and 79-69 twice; in favor of the new WBO Featherweight Champion, Miguel Angel “Mikey” Garcia.

Despite experiencing a very anticlimactic finish to a brilliant title winning effort, Mikey Garcia put forth a star making performance in the main event of the HBO broadcast. From the opening bell forward, the young ring technician dominated the action, flooring the customarily granite chinned fight veteran four times in just eight stanzas.

Garcia made his official championship declaration when he dropped Salido midway through the first round with a perfectly timed right hook as the incumbent title holder was attempting to close the distance between the two fighters.

After beating the count and seemingly gathering his senses, a hard Garcia left hook caught the 32 year old fighter off balance and sent him to the canvas once again in the closing seconds of round number one. Subsequent to opening his initial title opportunity with a dominant 10-7 first round, Mikey Garcia continued to outclass his older and more experienced adversary with superior technique that included a heavy dose of explosive counters.

In the 2nd round, the proud Mexican fighter did a better job of cutting off the ring and shortening the distance between the two combatants, but Garcia continued to score by landing the harder and more impactful shots. Salido seemed to merely follow around an explosive puncher while eating heavy shots from various angles.

To begin the 3rd round, Salido approached his opponent with a much more torrid and faster pace. Although Garcia was forced to use the entire ring, the Oxnard, California resident stayed calm and composed while being pressured. At the 1:50 mark of the third stanza, Salido walked into a short, compact right uppercut that dropped the ring veteran for the third time in the championship bout.

Although the defending titlist easily beat the referee’s count, Salido was now in a serious mathematical hole after dropping the first three rounds with three additional point deductions from clean knockdowns.

In the opening minute of the fourth round, Salido was floored for a fourth time with a short, left hook. Although substantially behind on points after just four rounds of action, the fearless aggressor continued to battle, and closed the gap between both fighters considerably while landing the looping right hand from mid-range with regularity for the first time in the contest.

At the one minute mark of the fifth round, Mikey Garcia landed a starching right hand that genuinely hurt the reigning champ and pushed him back against the ropes. The tough Mexican fighter was getting hurt with shots that he didn’t see coming during round number five. The first four knock-downs were the product of perfectly timed counters while getting caught off balance. But in rounds five and six, the champion was legitimately getting hurt by Garcia’s shots.

Orlando Salido was getting punished to open the sixth round. While stilling trying to force the action, the Mexican champion was getting cracked with a wide arsenal of punches from multiple angles and distances. The determined title holder was starting to see his WBO Championship slip from his grasp. Salido’s fifth defense would be his last if he didn’t turn up the heat and press his young challenger more fervently.

Salido began to find some success midway through the seventh with wide, looping rights and lefts at mid-range while pressing Garcia throughout the entire round. It was clearly Salido’s best round of the fight and a possible glimmer of hope for the determined title holder. Mikey Garcia was outlanded throughout a round for the first time in the fight. The Mexican warrior landed 18 of 82 shots thrown.

In the eighth and eventual final round of action, the young title challenger seized overwhelming control of the fight and punished Salido once again with the harder and more compact shots to the body and head. Garcia did a brilliant job of landing stunning left hooks before immediately turning his opponent and leaving him out of position to counter effectively.

Although Orlando Salido had pressed the action throughout the entertaining eight rounds of action and threw more punches than the young title challenger, Mikey Garcia showed his class by landing at a much more accurate 38% connect ratio.

Compubox statistics showed Orlando Salido landing only 74 of 408 total punches thrown, for a connect percentage of only 18%, while Garcia connected with an impressive 148 of 383 total shots thrown.

Mikey Garcia improved his record to 31-0 with the title winning effort, while Salido garnered his twelfth loss as a professional.

Because of the lack of Featherweight names on the Top Rank fight roster, Mikey could be looking at a possible first defense against former 126 pound titlist Juan Manuel Lopez or former multi-division world champion Cristian Mijares in the summer of 2013.

Regardless of potential opposition, the future definitely looks bright for the new WBO Featherweight Champion.