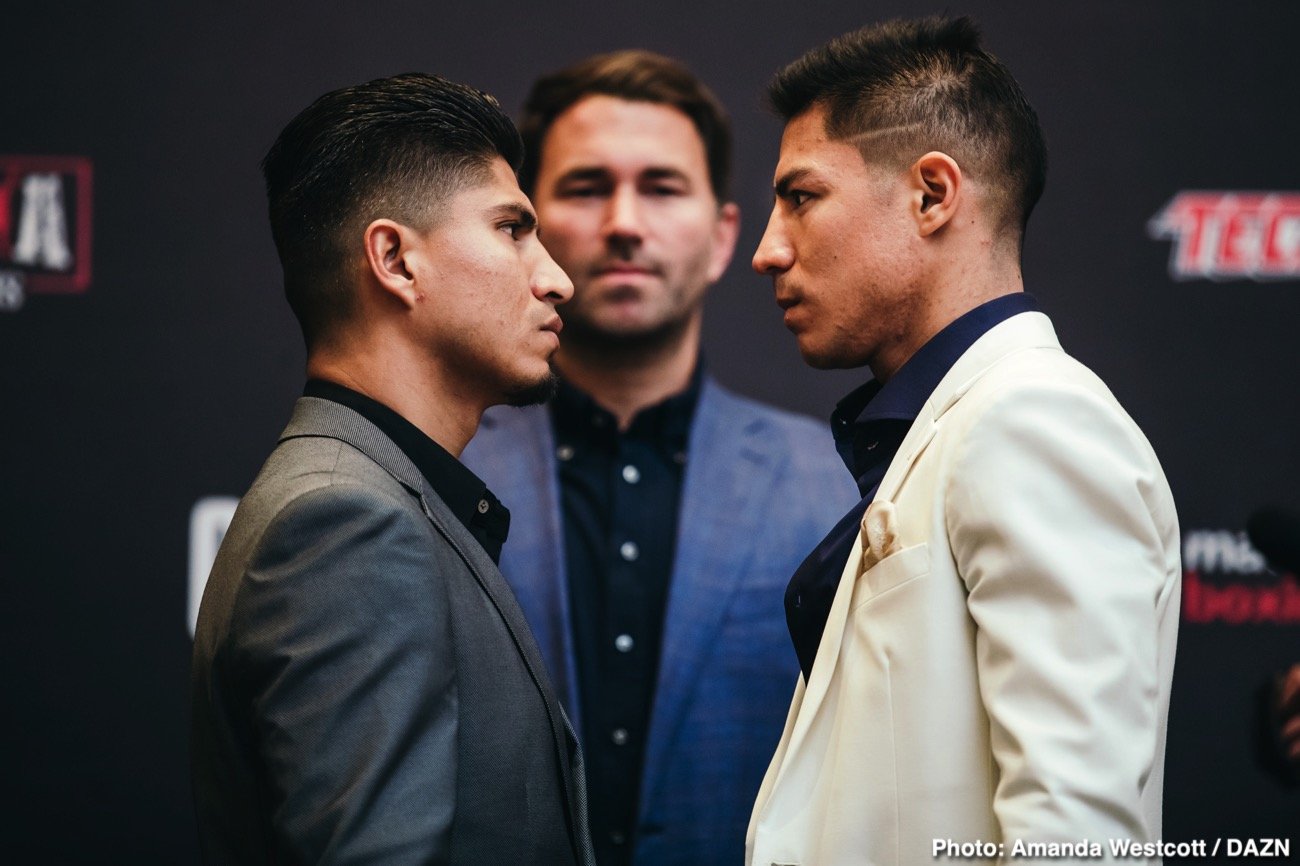 This Saturday night Mikey Garcia steps through the ropes for the first time in almost a year to face Jessie Vargas in a crossroads fight at welterweight. If successful, Mikey could be lined up for a summer fight against Manny Pacquiao in Saudi Arabia. A loss here would send Mikey back to the drawing board along with dropping down to 140. The co-feature is the tightest-matched bout on this DAZN card pitting former pound for pounder Roman Gonzalez against Kal Yafai.

It has been just short of a year since Mikey Garcia was soundly defeated by Errol Spence Jr. at Cowboy Stadium, in Texas. Back in Texas, Mikey needs to win impressively over a sturdy Jessie Vargas to prove to the world that he belongs north of the junior welterweight division and more importantly a possible fight with Manny Pacquiao could be a stake. On paper, Garcia is a clear favorite to beat Vargas but in the minds of many the little brother of renowned trainer Robert Garcia, is not cut out to last at welterweight. A neutral observer could’ve given Mikey a round against Errol Spence but anything past 1 or 2 would be bending over backwards.

While many folks assumed Spence would walk-down Garcia and it was up to Mikey to flash the ultra-skill he had shown at lower weight classes to outbox Spence. In the ring it was just the opposite, Spence was the one who took his time and fought at a measured pace using his ring IG and length to contain Mikey for most of the night. As the rounds wore on Spence began to chop Mikey down bludgeoning him to the body in route to an easy decision victory. We just kind of assumed Mikey would go down to 140 if not all the way to lightweight were the action is heating up and filled with quality talent.

Jessie Vargas is a quality fighter who competed at a high level of the sport of boxing in the 140 and 147 divisions. Vargas’s first true test that pushed his limits came on a Floyd Mayweather undercard versus Josesito Lopez in 2011. 9 fights later he took on a likely hall of famer in Timothy Bradley. Vargas wasn’t able to get many rounds under his belt but did manage to hurt Bradley late in the fight with a right hand. After scoring a TKO over an undefeated boxer in Sadam Ali, Vargas challenged the great Manny Pacquiao. Pacquiao dominated Jessie beyond a few moments from time to time. Getting back on his feet, Vargas scored a UD over Aaron Herrera which put him in line for a fight with Adrien Broner in 2018.

Broner and Vargas fought to a fair draw in this podcaster’s mind it’s too bad a rematch never happen because it was an appealing bout. Later in 2018 Vargas would also fight Thomas Dulorme to majority draw and surprisingly Humberto Soto gave Vargas a better fight than expected. Could a long career spanning close to 12 years finally be catching up to Jessie? One thing is for sure will definitely get to find out this Saturday night on DAZN when Vargas takes on Garcia.

Strangely, and maybe it’s because Eddie Hearn has pumped up this fight and called this card a ‘Monster”, lots of folks on boxing twitter are calling for a full-on war to take place. Don’t get me wrong this fight does capture my attention but the odds are against it turning in to world war 3. That’s not dumping on this card at all like some platform fanboys will take it. It is possible that we get a great two-way scarp and if that happens I will be jumping for joy as will many of my fellow boxing degenerates.

I have one question though, when is the last time Mikey Garcia was in a war? So you don’t have to rack your brain I will help you, never. I posed this question on boxing twitter and someone replied with Orlando Salido. To that I disagree firmly due to the fact that it was one-sided beatdown that saw Salido on the mat repeatedly. Was it a rough fight sure but Salido using his head to break Mikey’s nose doesn’t make up for Garcia doubling him in punch lands.

Sergey Lipinets did land several flush shots but how many rounds did he actually win on Mikey? Like I mentioned I hope this is a blood bath and goes down as fight of the year but I just don’t see it. If Mikey does come forward with some recklessness as he has stated it will obviously increase the chances for a great tussle. It’s not that I don’t see Vargas touching Mikey, it’s just the weight is the only reason I give Jessie a somewhat decent chance to be victorious. Mikey will measure Vargas with his jab and begin to land clean shots with the left hook and fierce right hand. Look for Mikey to exploit Vargas’s body and then add two-punch combinations whenever he sees fit. A good opponent for Mikey at 147 sure, but this hack-of-a-scribe is calling for a 9-3ish type scorecard.

My Official Predictions is Mikey Garcia by Unanimous Decision.

The co-feature has a chance to really cook if the former pound for pound champion Roman Gonzalez is near his best instead of completely shopworn. That’s the danger in placing any real money on this fight because we just don’t know exactly where ‘Chocolatito’ is at this stage. The 26-0 Kal Yafai is a solid orthodox fighter that loves to use or abuse depending how one looks at it, his jab. Yafai has a snappy jab and he will throw that thing until the cows come home. The Birmingham native has good movement and once comfortable, Yafai will throw straight right hands and left hooks to the body.

The first key to this fight is body attack, one way to find out how long in the tooth Gonzalez is to test the midsection. Roman has been in numerous wars and what better way to find out just how game he is then assaulting the body. That said look for Roman to rage forward but also do damage to Yafai’s body as well. Punches to the liver and hip if landed properly will no doubt slow down the younger outside fighter. Roman likes to put multiple combinations of punches together as he looks to cut the ring on Kal. Super Flyweight hasn’t been all the kind to Roman and his size will play a factor to an extent depending how Kal approaches this matchup.

One thing in Roman’s favor regardless of how shot he may be is the lack of fights for Yafai at the top level. Yafai hasn’t faced much of adversity in the ring and his resume is lacking in the way of dangerous outings. Look for Yafai to be on his back-foot for the most part as he attempts to elude the charging Gonzalez. The tone must be set early and often by ‘Chocolatito’ and with early success it will help him get over any lingering mental effects from his past wars. This will turn out to be a very close fight as it is on the betting books. Roman will land heavy enough shots that eventually wear out Yafai, not calling for a stoppage but in the rounds after say 3 or 4, Gonzalez will chip away at the head and body of Kal. A competitive first chunk of frames slowly but surely turns in to a semi-dominate performance Roman. Kal’s defense will be tested and his offense is too basic to hold off this raging bull from Nicaragua.

My Official Prediction is Roman Gonzalez by Majority Decision.

Side Note: All-action fighter Julio Cesar Martinez and unbeaten but also untested Jay Harris could make for a pleasing fight style wise on the DAZN card.