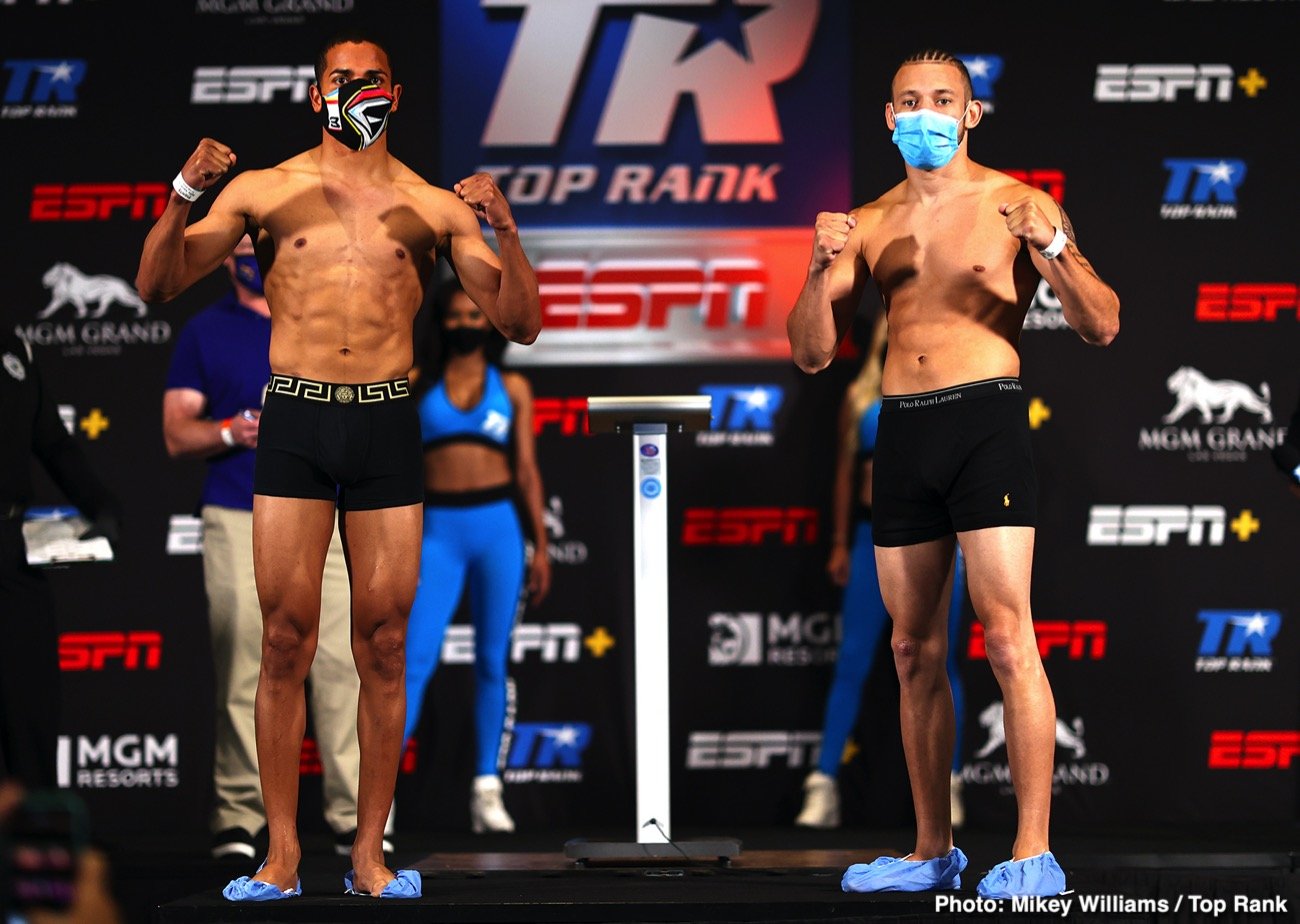 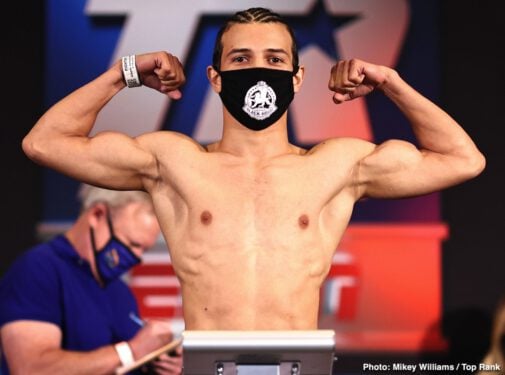 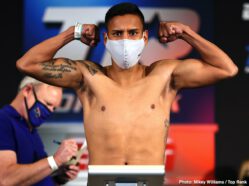 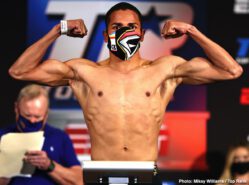 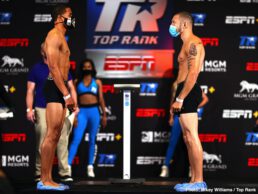 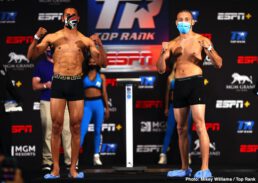 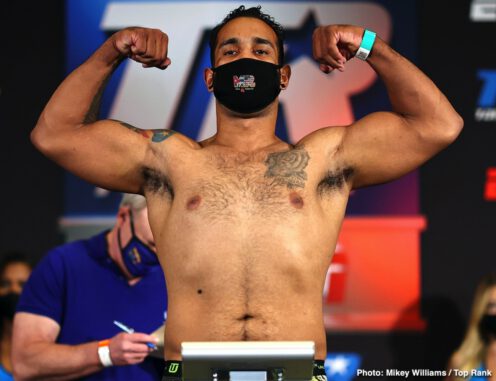 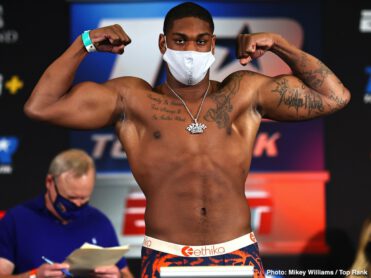 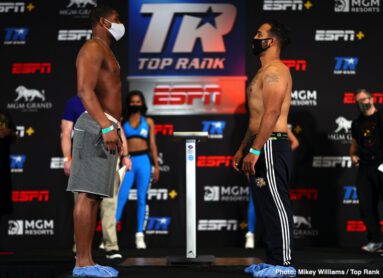 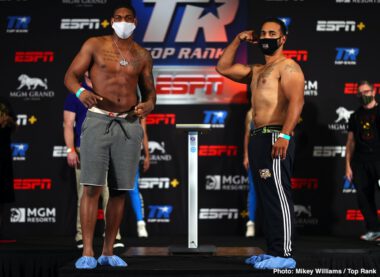 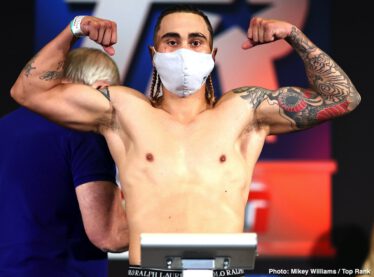 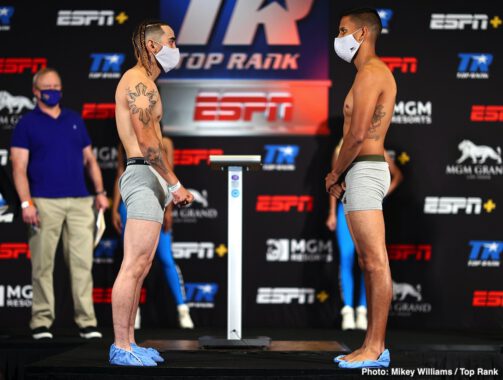 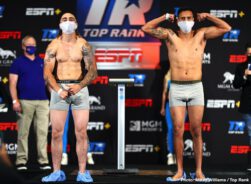 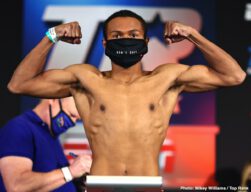 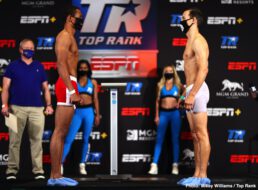 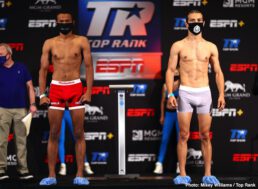 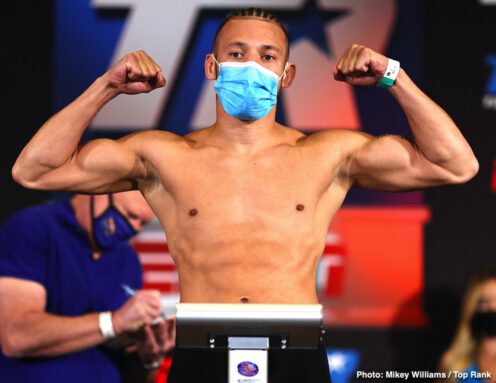 Felix Verdejo – “Having passed the initial test of the scale, it is time to demonstrate tomorrow in the ring the result of all my dedication, effort, and perseverance. It will be different to fight in ‘The Bubble’ at the MGM Grand in Las Vegas without my fans, but I have no doubt that I will carry in my heart, my family, my people of Puerto Rico, and all who have supported me throughout my career.”

* The Miguel Marriaga-Mark John Yap main event, contracted for 128 pounds, was canceled after Yap weighed in at 136.7 pounds. Verdejo vs. Madera is the new main event. The card will proceed as scheduled live on ESPN & ESPN Deportes TOMORROW beginning at 8 p.m. ET/5 p.m. PT.

In a 10-round lightweight fight, Puerto Rican sensation Felix “El Diamante” Verdejo, closing in on a world title shot of his own, will fight the unbeaten Will Madera.

“Felix is so close to realizing his potential, and with a great trainer like Ismael Salas in his corner, anything is possible. This is going to be an action-packed card, and both Miguel and Felix will be tested.”

Verdejo (26-1, 16 KOs) is seeking his fourth consecutive win since a shocking 2018 TKO loss at the hands of Antonio Lozada Jr. Now based in Las Vegas under the tutelage of Salas, the 2012 Olympian is coming off an ESPN-televised decision win Jan. 18 over Manuel Rey Rojas. Madera (15-0-3, 8 KOs), from Albany, New York, impressed American fight fans with his nationally televised decision win over the previously undefeated Thomas Mattice in February 2019. He is 2-0-1 since the Mattice victory, including a second-round stoppage over Edgar Ramirez on Jan. 28.

“July 16 marks my return to the ring against Will Madera in what will be my second fight with my new team,” Verdejo said. “This is a great opportunity to demonstrate the progress resulting from my work. I have renewed motivation to realize my dream of becoming a world champion. That is the goal.”

Alexis “Perro” del Bosque (17-5, 9 KOs), from Dallas, Texas, will take on an opponent to be named in an eight-rounder at lightweight. del Bosque, who has won four in a row, was scheduled to fight Joseph Adorno in the MGM Grand “Bubble” last month, but the fight was canceled after Adorno failed to make weight.

Featherweight prospect Martino Jules (9-0, 2 KOs), a former amateur standout from Allentown, Pennsylvania, will face the upset-minded Aleem Jumakhonov (8-2-2, 4 KOs) in an eight-rounder. Jumakhonov, who was born Tajikistan and now resides in Southern California, is coming off a unanimous decision over the previously undefeated Anthony Chavez.

Raphael “Trouble” Igbokwe (14-2, 6 KOs), winner of two straight bouts, will fight Genc Pllana (8-1-1, 4 KOs) in an eight-rounder at super middleweight. Pllana is coming off a nationally televised decision victory over Kevin Newman II (11-1-1 at the time) and a draw against Kalvin Henderson (12-0).