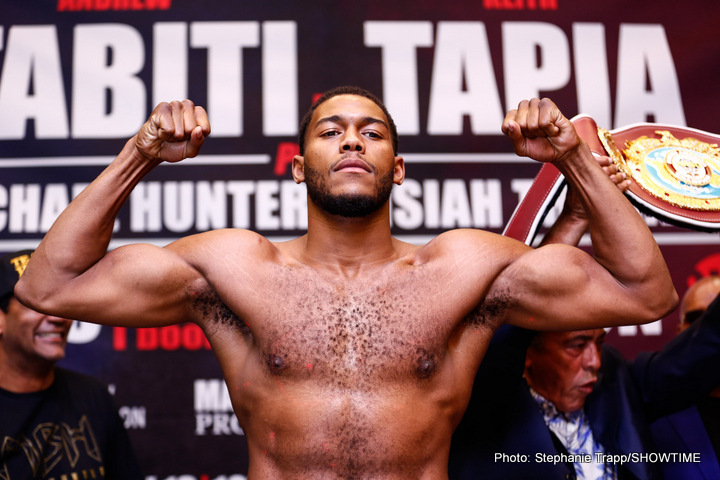 Well, so much for the high praise Barry McGuigan was giving heavyweight hope Martin Bakole. Last night in London, in his biggest test to date, the Scotland-based big man from The Democratic Republic of The Congo met former Olympian Michael Hunter – and was badly exposed along the way to his eventual tenth-round stoppage defeat.

After an exciting, at times somewhat odd fight, former cruiserweight world title challenger Hunter landed with some fast and accurate shots to the head, these punches sending the much bigger and heavier Bakole’s head swivelling violently, prompting the referee to finally dive in and stop the fight. Time was 2:19 of the final session. Hunter is now 15-1(10), Bakole falls to 11-1(8).

Ahead of the fight, McGuigan, writing in his column for the Mirror, said how the natural talent belonging to Bakole made him think of Riddick Bowe and that these comparisons would be proven accurate come Sunday morning. Instead, the Hasim Rahman-guided Hunter did a number on Bakole, using his greater speed, accuracy and effective punching to get the job done.

The action was terrific, the opening two-rounds full of punching – from Hunter especially. Bakole, lumbering and unable or unwilling to let his own powerful hands go as much as he should have been, didn’t seem to have any real idea of how to get Hunter out of there. Hunter, lunging in at times and off-balance as a result, had to take some shots himself, but Bakole seemed to be getting the worst if it. Then the nearly-50 pounds heavier man pretty much stopped punching.

Hunter was now able to box and punch and build up a significant points lead. Things got worse for Bakole when he hurt his right shoulder in the eighth-round. Wanting to quit, Bakole was urged on by trainer Billy Nelson and he struggled through the ninth, throwing his left jab only. The two gave us a grandstand finish in the tenth, as Bakole gave it all he had and Hunter went for the stoppage, which he got after blitzing his man with some thunderous and clean head shots.

It was thrilling stuff and in the end Hunter overcame a size and weight disadvantage to pick up a good win. Fans certainly want to see more of Hunter (beaten only by the supreme Oleksandr Usyk, via decision down at 200 pounds). As for Bakole, who was smiling after the loss when he perhaps should have been gutted, he needs to regroup in a big way.

So much for those Riddick Bowe comparisons.