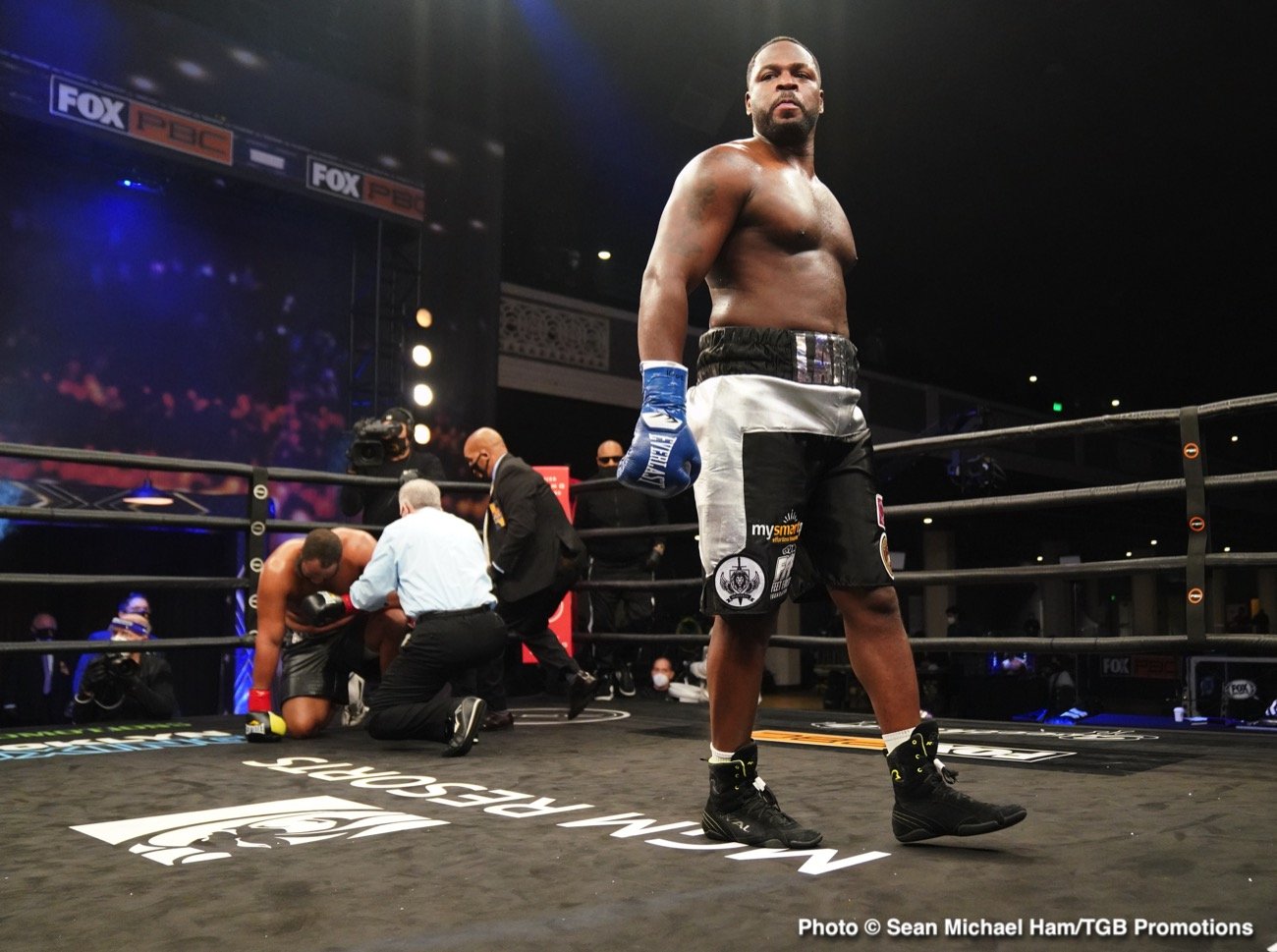 Unbeaten Michael Coffie A Hungry Heavyweight To Keep An Eye On

The third-round KO win heavyweight prospect Michael Coffie scored over former amateur standout and fellow unbeaten pro Darmani Rock might not go down as his coming-out party; maybe his dress rehearsal. Because the big, powerful and physically imposing Coffie wants bigger names, and soon. Going into last night’s chief supporting bout (on the Plant-Truax card), the younger, higher profiled Rock was perhaps the pick to win in the opinion of most.

Coffie is already 34, whereas Rock is just 24. But it turns out Coffie, a former Marine who served eight years and learned to box under the tuition of his corporal, is a late bloomer. Coffie had around one year of amateur experience, and he went pro at the somewhat advanced age of 30. Now 12-0(9) and on the lips of those fans who saw his uppercut/hook handiwork take care of Rock, now 17-1(12) in that third round, Coffie will have more fans tuning into his next fight.

The 6’5” 270-pound big man has pretty fast hands, but he attributes last night’s win to good timing. Rock was coming on, only for Coffie to land a sizzling, well-timed counter shot to the chin that basically ended the fight. Solid, carrying the weight well and in shape, whereas Rock was disappointingly flabby, Coffie sure looked/looks the part. Reading Coffie’s story can make a fan think of former WBA heavyweight champ Mike Weaver. Like Coffie, Weaver served in the Marines and was a late bloomer in boxing.

Coffie has yet to hit any speedbump along the road the way Weaver did in the early going of his pro career, but there promise to be tougher fights ahead for the man from New York. And Coffie awaits the challenge.

“I’m trying to get whoever is above Darmani Rock. I want that person,” a victorious Coffie said last night. “After that, I want somebody else who’s above him, and above him and so on and so forth – whoever is going to get me to the world title.”

The heavyweight contenders have been put on notice. Coffie managed to fight three times last year, despite the troubles the coronavirus caused the sport. Let’s hope we see as much of this exciting and talented heavyweight here in 2021.