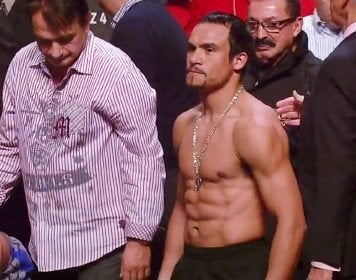 Heavyweight great Wladimir Klitschko is not the only long reigning former champ and guaranteed future Hall of Famer to have announced his retirement from boxing this week. Mexican legend and former multi-weight king Juan Manuel Marquez also made the decision to hang ’em up, retiring at the age of 43 after having fought a quite superb career; one that lasted no less than an incredible 21 years.

Master counterpuncher Marquez, who turned pro way, way back in May of 2003 (actually losing his pro debut by DQ), fought a long list of big names and “Dinamita,” as the warrior from Mexico City was known, also fought a number of great battles. Winning world titles at 126, 130, 135 and 140 pounds (an interim belt) Marquez met such huge names as: Manny Pacquiao (X4), Floyd Mayweather Junior and Marco Antonio Barrera; along with elite fighters such as Juan Diaz (X2), Chris John, Orlando Salido, Joel Casamayor, Tim Bradley…….and the hugely impressive list goes on.

It is the bitter, intense and epic rivalry with Pacquiao that Marquez is best known for, however. The four fights these two stars had, fought over eight years, at three weight divisions, thrilled the world. The final fight is arguably the most unforgettable, though. After battling to a draw in fight-one and then dropping two extremely close and debatable decisions after the initial fight, Marquez stunned Pac Man, and the world, with his chilling one-punch KO in the fourth and final showdown.

Marquez, who threw THE best punch in a career filled with finely executed blows, left his arch-rival flat on his face; the rest of us left with our mouths hanging open. It was as shocking as it was incredibly impressive, Marquez proving his greatness in one huge way when it wasn’t in doubt any more anyway.

It was tough, Marquez said, to even think about matching the amazing high this win, this KO, this punch, brought him. There would be no fifth fight, even though Pac Man wanted one.

Marquez had nothing left to prove, even if he did box twice more after his December 2012 sizzler (losing one, winning his final fight). “Dinamita” exits with a fine 56-7-1(40) record. Marquez was never once stopped.