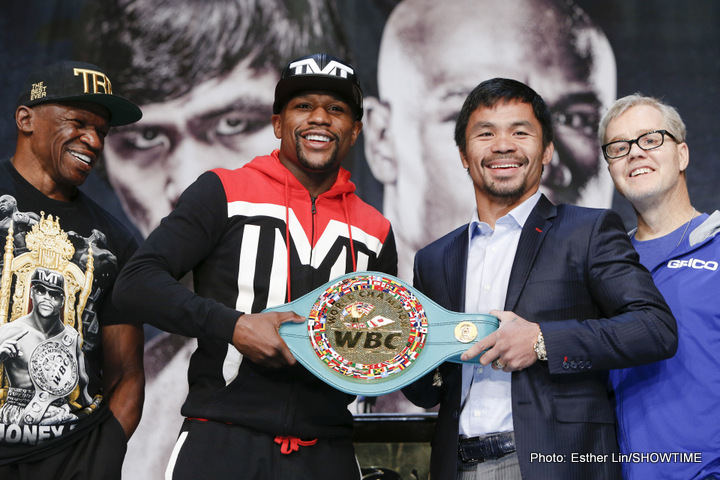 Floyd “Money” Mayweather sure knows how to steal the limelight. On the day of the huge Gennady Golovkin-Canelo Alvarez return, Mayweather has sensationally announced how he will fight a monster rematch of his own – with fellow megastar Manny Pacquiao.

Reportedly the two all time greats met today in Japan and agreed the fight. Mayweather took to social media a short time ago to announce the rematch.

“I’m coming back to fight Manny Pacquiao, “Floyd wrote “Another nine-figure pay day on the way. ”

Mayweather added how he is coming to “take the (WBA interim) belt” and that he “don’t want to hear no shoulder excuses.”

As fans know very well, Pacquiao claims still how he was severely hampered by a bad shoulder injury in the first fight – the so-called “Fight of The Century” back in May of 2015. Now, with Pacquiao, almost 40, looking good in returning to winning ways against Lucas Matthysse a while back, he is set to get a second chance against Floyd.

Mayweather will turn 42 next February and there were those who suggested he looked to have aged a little and also slowed down in his last bout, the financial blockbuster that was his boxing/MBA hybrid of a fight with Conor McGregor. Can Pac Man possibly get the win this time?

Will the return fight prove to be anything like the pay-per-view monster the first fight was? Fans remember only too well how dull the 2015 fight was, with Mayweather basically cruising to a clear, less than dramatic decision victory. Is there any real reason to believe the return clash will be an exciting affair?

Then again, both greats are superstars of giant proportions and many fans, maybe millions of them, will likely find it hard to decline buying the sequel. There is no word yet on an exact date or location, but Las Vegas obviously looks like a good bet seeing as this is Floyd’s choice of venue over and over.

Or maybe there is an outside chance the fight will take place overseas somewhere, somewhere where big money men are willing to pay a national debt to host it. We will no doubt find out in due course

For now, with big fights being either officially announced or set to be announced,, Floyd Mayweather has once again proven he is the king when it comes to grabbing the sporting headlines.

Mayweather will of course be going for an incredible 51st pro win in December. Is Floyd perhaps pushing his luck and is there a chance that he will find himself going out a lower as soon many other great fighters have? As popular as Manny is, it seems many fans will be rooting for the upset, and for “Money” to be very upset.

What will be the tag-line for the rematch?