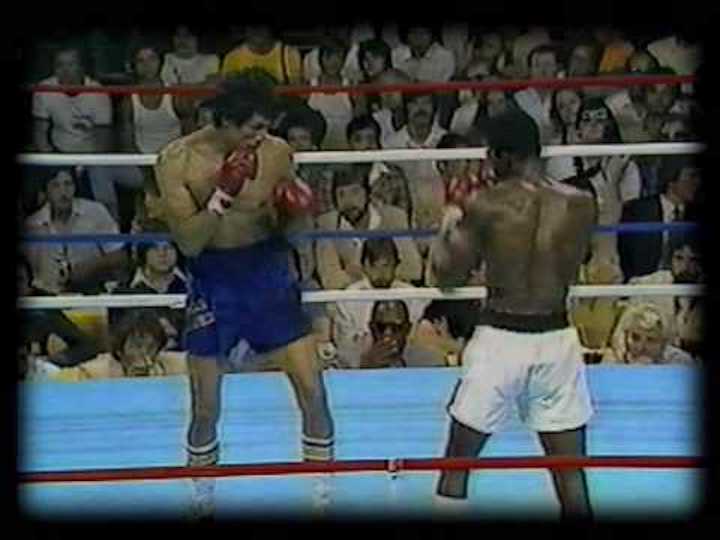 … Four Decades On, It’s Still The Greatest Round In Light-Heavyweight History

There is a video on YouTube (YouTube surely one of the finest gifts to any fight fan, so many treasures of ring history freely available) that shows the eigth round of the epic Matthew Saad Muhammad-Yaqui Lopez return fight in full – accompanied by the famously inspirational “Rocky” soundtrack. This may seem corny but, as all fans who are familiar with the simply breathtaking three minutes of gloved warfare Muhammad and Lopez engaged in know all too well, the glorious addition of the soundtrack is most appropriate.

In fact, if the kind of brutal, ferocious and almost unbelievable back and forth, bombs away, give no quarter, total refusal to yield action was part of any boxing movie, it would instantly be shot down as being far too far-fetched, far too over the top, far too unrealistic. Yet Muhammad and Lopez took boxing to new heights on that Sunday in July of 1980 when they met in a rematch; new heights in terms of leaving all watching fans in an open-mouthed, shaking and screaming state.

Chocolatito vs. Estrada analysis by Algieri and Vargas

Muhammad – almost certainly the most consistently thrilling 175 pound warrior in boxing history – had promised Lopez a rematch immediately after stopping him on a cut in a non-title fight that took place in 1978 (the then Matt Franklin getting the 11th round TKO). Having become world champion in his next fight, and soon changing his name due to religious convictions, Muhammad was as good as his word.

In July of 1980 (the 13th, so 40 years ago next Monday), fight fans everywhere wound up owing Muhammad an eternal debt of gratitude for being a man of his word.

The return between Muhammad and Lopez was already a great fight before the eighth round. But then it became the stuff of legend. Lopez, boxing with a blend of boxing smarts, toughness, and a willingness to slug it out, had won the lion’s share of the rounds going into the second half of the fight. The two had already given the crowd its money’s worth, with some terrific exchanges and plenty of hurtful punches landed on both sides.

But the eighth was super-special. The eighth round was superlative. The 8th round, it was sheer, mesmerizing fistic violence the kind of which is rarely seen.

Muhammad came out fast, looking to try and work Lopez over with both hands, shots to head and body landing. Lopez was bleeding once again, yet he didn’t even seem to notice, or care. The two men were fighting as though this was the last round. Muhammad drove Lopez to the ropes, Yaqui fired back. Neither man had even the slightest thought of initiating a clinch. Muhammad, keeping his right hand up against his head and pumping out his left, almost as though he was saving his right, was teeing off on his challenger; hooks up and down, mostly up, doing damage.

Lopez countered with a right to the head, a blow Muhammad ignored. But then, having taken plenty of shots, Lopez burst into a salvo as he manged to blast away, stunning and pushing Muhammad back. Belting Muhammad with everything with both hands, the champ’s body and head being hammered with around 25 to 30 consecutive punches, Lopez was seemingly seconds away from victory. But this was Matthew Saad Muhammad, a man who made a habit of overcoming, of coming back when he had no right to do so; of snatching victory from the snarling, drooling jaws of defeat.

So How Great Was Wilfredo Benitez? 45 Years Ago Today He Made History

And, after being punished in a corner, his head snapping back, his title surely gone, Muhammad was somehow (nobody knows how) able to come roaring back, chopping away, digging in hard and effective shots of his own. Still there had not been a single clinch in the round. Lopez, arm-weary and most likely in a state of disbelief, had no choice but to back up. Muhammad closed out the round having his rival, the man who had been torturing him mere seconds before, on the ropes himself.

It was incredible. It was the best round fans had ever seen in the light-heavyweight division. All these years later, and nothing at 175 pounds has equaled it, much less surpassed it.

Muhammad came on to stop a still-game Lopez in the 14th round. This was perhaps the greatest action fight Muhammad ever gave us in a career that is literally filled with them. In terms of anything topping it for Round of The Decade, round eight of Matthew Saad Muhammad-Yaqui Lopez II is rivaled only by Hagler-Hearns round-one as far as 1980s are concerned.