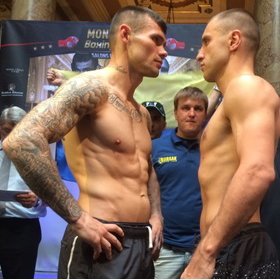 Martin Murray (27-1-1, 12 KO’s) is making no secret to the fact that he wants another world title shot after losing to former WBC middleweight champion Sergio Martinez in a fight that Murray feels he should have won.

Murray sees the WBC 160-pound title as belt that should rightfully belong to him, and that’s why he wants to fight the new owner of it Miguel Cotto. Murray believes that the smaller 5’7” Cotto would be vulnerable to his fists, and he wants to prove to the fans that he’s better than him so that he can take the WBC strap and bring it back to the UK.

“I know I could definitely beat Cotto. He didn’t dethrone the same Sergio Martinez that me or Julio Cesar Chavez [Jr] fought,” Murray said to Boxnation.com. “I’d also like Cotto because he’s got the WBC belt that I believe should already be mine. And never forget boxing is also business. That’s where the most money is.”

Given the boxing is business, Murray probably won’t get a fight against Cotto in this lifetime. If Cotto were to fight Murray on pay-per-view the numbers would likely be horrid, even if Bob Arum of Top Rank stacked the undercard with some of his top fighters, which I highly doubt he would. It would likely be Cotto facing Murray and then an undercard filled with prospects.

If Murray hangs around long enough, Cotto will eventually retire or get beaten. Murray can then push the World Boxing Council to force a fight between him and the guy that beats Cotto. If it’s Saul “Canelo” Alvarez, Murray will likely be out of luck there too, because Canelo won’t waste a PPV fight facing someone that American casual boxing fans have never heard of.

Murray will be fighting Max Bursak (29-2-1, 12 KO’s) this Saturday night at the Casino de Monte Carlo Salle Medecin, Monte Carlo, Monaco. It’s not a great fight, but at least Murray’s chances of winning will be good. He needs to keep winning so that he can eventually get a crack at the WBC title in a year or two after Cotto vacates or gets beaten.