The next chapter in the Pacquiao legend has begun. Last night in San Diego, 21 year old Emmanuel Pacquiao Junior, AKA Jimuel Pacquiao, won his first sanctioned fight. Now 1-0 as an amateur (officially, the 21 year old having had a number of unsanctioned bouts in Manila) Pacquiao won a decision over Andres Rosales in representing The Wild Card Boxing Club. The fight is available via Fight Hype and watching it shows how Pacquiao Jr is certainly a fighter with more than just a hugely famous last name.

Quick as one would expect, Pacquiao Jr, an orthodox fighter, not a southpaw like his living legend of a father, showed a good left jab, while he also landed some crisp overhand rights. No decision was announced at the end, as in scores, only the fact that Pacquiao was the winner. A small but lively crowd thoroughly enjoyed the fight that took place at the House of Boxing Gym in San Diego. 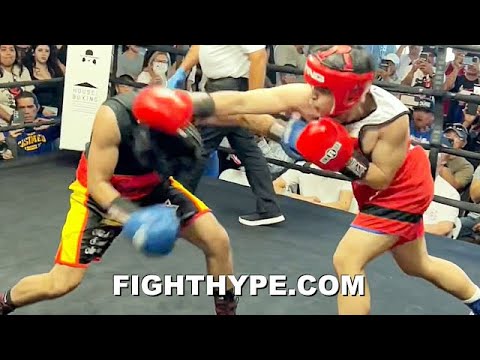 Pacquiao Jr will of course be well and truly placed under the microscope as he continues on his journey to who knows where. Indeed, as far as “Boxing Juniors” go, Pacquiao will have it tough in terms of people expecting him to be even half as good as his eight-weight king of a dad was. This of course is unfair. Trainer Marvin Somodio was happy with the performance Pacquiao Jr put on last night.

“This is only his first amateur fight but he showed me that he has heart,” the trainer said as quoted by Ring Magazine. “He’ll get better and stronger.”

Somodio will continue to be Pacquiao’s head trainer at the famed Wild Card Gym in Los Angeles and he says they are already looking to find a date for Pacquiao’s second amateur fight. Needless to say, fan and media interest will grow and grow as the 21 year old makes progress.

Interestingly, Manny Pacquiao’s amateur career read an impressive 60-4, with Pac Man having his first bout at the age of just 12. We will have to wait and see how Pacquiao Jr is moved; whether he will have a long or a short amateur career.