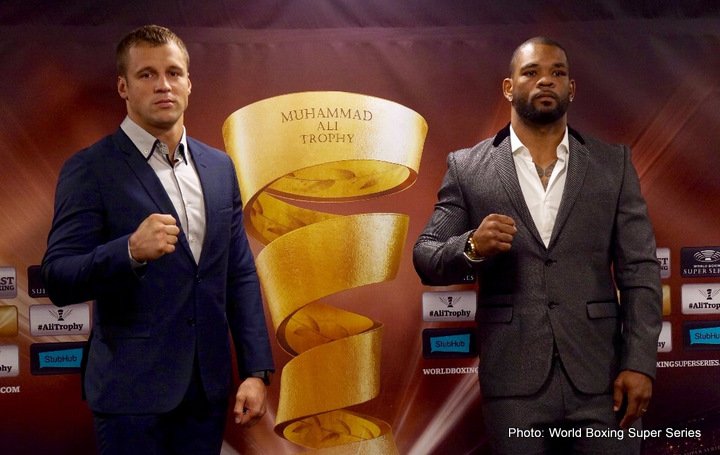 Briedis and Perez face to face in Riga before September 30

“I feel good, I am ready to go, I am ready to fight right now,” said Mike Perez. “This is a really interesting fight and I am looking forward to it and getting the victory. Whatever the fight brings I am ready for it.”

“I feel like I am in maybe the best shape of my life. The fans can expect the best from me in Riga. They can expect to the see something they might haven’t seen before.”

Cuban Mike Perez fighting out of Cork, Ireland was cool and calm when talking about fighting in Latvia.

“I know there will be thousands of fans screaming and cheering for Briedis, but I will just pretend they are rooting for me.”

“I am looking forward to fight in front of a sold out arena in Riga,” said Mairis Briedes: “I am well prepared for Perez. He is a southpaw and I am getting great sparring from different southpaw boxers. I can’t wait for September 30. On that date I will make the Latvian people proud.”

Ticket mania!: Briedis vs. Perez heading for fast sell out

“It’s great to know already now, that I can expect a huge crowd at the Riga Arena,” said Briedis after several thousand tickets sold in only a few days. “I’ve heard Perez saying he will not be affected by the crowd in Latvia, but he will hear and see the next level of passion.”

Mike Perez: “All I know is Briedis is a busy fighter who likes to come forward. I also know that I believe I am the best cruiserweight in the world and I am ready for whatever Riga brings.”

Kalle Sauerland, Comosa´s Chief Boxing Officer: “We knew that Briedis was a hot property and a local hero, but as this is the first major Championship fight ever in Latvia we are excited that we will have a full house on Sep 30 for which will be a real war between two warriors.”

The battle for the World Boxing Super Series Muhammad Ali Trophy in the cruiserweight division comes to Riga, Latvia on September 30 when WBC World Champion Mairis Briedis (22-0, 18 KOs) faces Mike Perez (22-2-1, 14 KOs) in a quarter-final bout at the Riga Arena, and tickets are now on sale at www.bilesuserviss.lv ranging from €20.60 to €175.60.

“I’m really happy with being able to start the World Boxing Super Series at home in front of my own crowd,” said 32-year old Briedis. “We fight to win the Muhammad Ali trophy, but I am also putting my world title at stake. This is a big thing.”

The Latvian world champion believes that the pressure from the crowd can be a problem for Perez.

“For Latvia this will be the first major world championship bout in history so I hope to see a sold out arena,” said Briedis.

“From my previous experience with the Latvian crowd I can already tell Mike Perez that boxing in front of Riga crowd will not be easy for him. The boxing community around the world will learn how passionate and loud Latvian fans be!” said Briedis promising that his fans will see the best version of him.

“My preparation camp has been going very well so far and I can assure my fans that I’ll be at my best when the 30th of September arrives.”

Cuban Mike Perez fighting out of Cork, Ireland is however calm when talking about fighting in Latvia.

The former heavyweight oozes self-esteem before the challenge in Latvia’s capital.

“I really believe I can win the Muhammad Ali Trohy. That is just how I see it. I think I will win, I can not see anyone else winning it. I am the best cruiserweight in the competition.”

The World Boxing Super Series is delighted to announce that the Riga Arena in Latvia will play host to the cruiserweight quarter-final bout between reigning and defending WBC World Champion Mairis Briedis (22-0, 18 KOs) and Irish-based and Cuban-born Mike Perez (22-2-1, 14 KOs) on September 30th.

Briedis, one of the cruiserweight tournament’s four seeded fighters, selected Perez as his quarter-final opponent at the live Draft Gala in Monaco on July 8th. His first fight will see him defend the WBC title he claimed with a unanimous points victory over fellow World Boxing Super Series competitor and former WBO World Champion Marco Huck on April 1st, and the 32 year-old is looking forward to kick starting the competition in his hometown of Riga. ‘’I’m greatly honoured to begin my World Boxing Super Series journey at the Riga Arena,’’ said Briedis.

‘’This is my first fight of the tournament, the first defence of my WBC World Cruiserweight title and I’m really happy that I will be able to do it in front of my home crowd. There are no easy fights in this tournament. Mike Perez has already made his name in the heavyweight division and seems to be in the shape of his life coming down to cruiserweight. Now, it’s about putting the hard work in the boxing gym and getting ready for the September 30th showdown.’’

Having announced himself on the cruiserweight scene with a 29-second KO win over Viktor Biscak on June 10th, Perez is eager to assert his dominance on the World Boxing Super Series starting with a quarter-final victory that would see him crowned WBC World Champion. ‘’I’m very excited,’’ said Perez. ‘’It’s the opportunity of a lifetime and I can’t wait. I have a chance to become World Champion in my very first fight in the tournament so I couldn’t have asked for better. Briedis is a good champion but I can’t wait to bring the belt home. I’m so lucky to have the opportunity to fight for the Muhammad Ali Trophy and also become the undisputed cruiserweight champion in this tournament and I have no doubt that I will do just that. I have worked so hard for these last couple of years and really dedicated myself to get this chance and nobody is going to take it from me. I have lots of experience as both an amateur and professional, a lot of ability and now at cruiserweight I’m much faster on my feet and can throw faster combinations so I feel like I’m a much better fighter.’’

Roberto Dalmiglio, Comosa`s Head of Management Board, says he is delighted to be staging this quarter-final contest at the Riga Arena in Latvia: ‘’The World Boxing Super Series is truly a global phenomenon,’’ says Dalmiglio. ‘’Over the course of the tournament, we will be visiting some of the best venues around the world. We’re very happy to be bringing this fight to the Riga Arena in Latvia, which will provide the perfect setting for an unforgettable night of boxing.’’

Comosa’s Chief Boxing Officer, Kalle Sauerland, believes Briedis versus Perez could prove to be one of the World Boxing Super Series’ most intriguing match ups. ‘’This tournament is filled with fascinating fights,’’ said Sauerland. ‘’And none more so than this. Mike Perez is making just his second appearance at 200lbs having moved down from heavyweight, and could well be the dark horse of the division, while Mairis Briedis is a proven World class operator who will be making his first World title defence. This really is an intriguing match up, and what the World Boxing Super Series is all about!’’