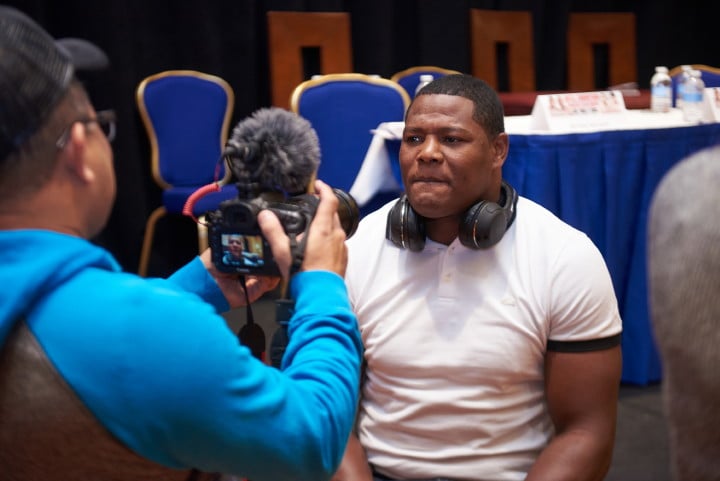 Robinson “Robin Hood” Castellanos (23-11, 13 KOs) of and former WBA Interim Super Bantamweight World Champion Oscar Escandon (24-2, 16 KOs) of Ibague, Colombia, who will face of in a 12-round fight for the WBC Interim Featherweight World Championship.

Below is what the fighters and their teams had to say at today’s final press conference:

“Unlike Mr. Thompson who uses humor and good words and is very well spoken, I instill fear through my hard work. In the ring is where I’m most comfortable and that’s where I’ll continue to prove why I am the most feared heavyweight on the planet.

“Tony said that he is Godzilla. I didn’t see the movie, but on Saturday night, King Kong is going to beat Godzilla.”

“I didn’t take this fight in my hometown to get embarrassed. I don’t believe in the boogeyman. D.C. raised a man. I’m all man. I don’t care who the opponent is. I’ll meet you in the middle of the ring, and let’s see what happens. He’s the kind of fighter who is going to bring out the best in me.”

“This is a card you don’t want to miss. We stacked it up from top to bottom. These are the kind of fights Golden Boy and HBO put on every time, and every time the fans are the winners.”

“Not only to the fighters on TV but to all the fighters, this is the time to make a statement in your career. When you have two heavyweights that want to fight, you are going to have a fight. In the heavyweight division you have to be careful, because of the power that they bring.”

“We put in a lot of hard work at the gym. At the end of the day there’s no one who can help you when you’re in the middle of the ring. Whether it’s in the first or the 12th round, it’s coming – there’s a knockout pending.”

“We got two stellar athletes. It should be a remarkable, action-packed card.”

“We’ve had a great preparation. I am very happy to be fighting for the WBO World Title once again, and I look forward to becoming a world champion. I will do whatever I have to do to come out victorious.”

“Sadam is a hard worker and diligent student. He’s my youngest fighter to reach this level. We’re going to show you Saturday night what we’re ready for.”

“If improvement if possible, perfection is not good enough. That is the way we trained. We improved in every way. You will all see that on display Saturday night. On Saturday night there will be one victor, and that will be Jessie Vargas.”

“Jessie reminds me of Alexis Arguello – he’s a gentleman outside the ring and a warrior inside the ring. Jesse wants to make a statement. He re-did his team. Jesse feels a lot stronger and he’s ready to fight.”

“This is a spectacular event, and we’re thrilled to be a part of it. All of these fighters are committed to fight anyone, anyplace, any time – those are the kind of guys that fans want to see.”

“I am very well-prepared. We’ve done everything we had to. I want to make history in boxing, and the only way to do that is to win on Saturday night, and that’s what I’m planning to do.”

“I want to dedicate this fight to God and my daughter who was born last week, and I haven’t met and to all of you the fans. I hope you really appreciate this great fight we are going to put on.”

“I just want to tell you if you haven’t seen me fight, I think you’ll enjoy the excitement I bring to the ring. The fans will be excited. I appreciate HBO for bringing boxing back to Washington, D.C.”

“Right now, I’m considered to be a prospect. Soon I’ll be a contender and then soon I’ll be a world champion. The fans should come out on Saturday and see all my hard work and training.”

“I’ve been training hard for this fight. I’m ready to take the steps so I can fight for a world title in the future.”

“I’m grateful to be on a card like this. I bring fireworks. If you haven’t seen me fight, be prepared.”

“I’m a Philly fighter. I’ll fight anyone, anywhere. I’m going to put on a show on Saturday.”

“Boxing and the DC Armory have been synonymous over the last four decades and we are thankful for HBO for continuing that tradition.”