This Saturday night, what should be a banger takes place on Showtime pairing entertaining fighters in Luis Nery and Brandon Figueroa.

Styles make fights, as the old saying goes, and this one here should give the viewing audience at home something to be happy about. Both fighters are in their prime and will be ready to mix up once the opening bell rings. So many times in boxing, fans are left wondering what’s next for the winner post-fight night. The beauty of this main event barring a draw or (knock on wood) major injury, the victor will not only earn a quality name on their resume they will also meet WBO 122-champ Stephen Fulton on September 11th.

In the battle of platforms in the world of boxing stateside, the key is for Premier Boxing Champions who partners with Showtime/FOX, Top Rank with ESPN, and Matchroom Sports/Golden Boy on DAZN, to make as many of the best in-house fights as possible. It’s rare when a fighter who’s signed to one of the major promotional companies crosses the street to appear on a separate platform. Generally speaking, it’s been the highest level of bouts that produce enough money to allow maneuverability. Several times a year, fighters get sent to the other side, or one side win’s a purse bid normally though it’s as a clear ‘B” side opponent or a just a solid matchup. There has to be enough money and then some for the best to fight the best if they’re represented by opposite players in this boxing game, unfortunately.

Over the last two years or so, the writing was on the wall as Al Haymon continued to acquire top-shelf talent in and around the 122-pound division. Showtime came back with a super bantamweight card after a long break from Covid-19 last August. 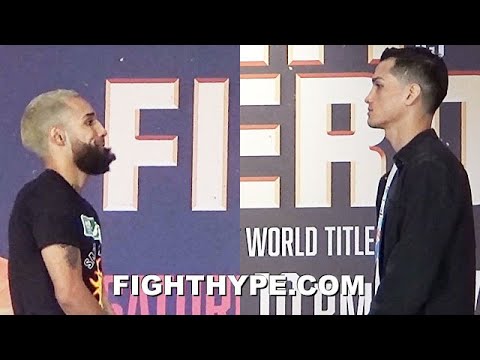 In January, yet another card took place with 4 top-10 fighters at 122. Now a third installment, if you will, comes this Saturday, and it shouldn’t take long to pop off in the ring. Rightfully so, Luis Nery is the favorite, but his last two outings didn’t necessarily scream action-fight as fans had become accustomed to watching a Nery fight. Brandon Figueroa had his own issues in a hard-fought draw to Julio Ceja in late 2019. With both of these guys looking to show everyone what they’re really made of, look for this fight to be high-paced once a chunk of minutes ticks off the clock.

As a 16-0 prospect, Brandon Figueroa’s breakout moments came via back-to-back stoppages over vet Oscar Escandon and Moises Flores. Winning a vacant strap over Yonfrez Parejo wasn’t all that impressive, but Brandon backed it up with a knockout of Javier Chacon.

Next came a back and forth all-action brawl against Julio Ceja. Ceja and Figueroa combined to throw over 2,800 punches in a contest the ended in a split draw. Brandon fought well in the first part of the fight and finished the stronger of the two. Still, it wasn’t enough to get the ‘W.’ It should be noted that Ceja was a whopping 4 ½ pounds overweight, and he can definitely crack, but Figueroa took the punches well, maybe too well showing his defensive flaws.

Luis Nery is, or we might say, was a pressure fighter with a take no prisoners mentally. Two fights with Shinsuke Yamanaka standout and, to a lesser extent, opponents such as Arthur Villanueva, McJoe Arroyo, and Aaron Alameda. Nery fought Juan Carlos Payano on the undercard for Pacquiao/Thurman finishing him with a left hand to the body in the 9th round. Prior to the stoppage, it was pretty much an even fight as Payano troubled Nery using movement and distance, not allowing him to get all the way inside for long stretches.

At 118, Luis Nery had serious scale issues, twice missing weight, which gave him reason to move up a weight class to 122. Moving up in weight wasn’t the only change for Nery, as he added world-renowned trainer Eddy Reynoso to help him become a more complete boxer. The first look at what Luis and Eddy had been working on appeared to be a well, work in progress. With a super busy stretch for Reynoso, Luis decided to go another direction in his preparation for Saturday’s fight.

As this matchup pertains to how it will play out in the ring, it could take several minutes for these two to let loose on each other. One could see Figueroa attempting to use his reach of over 5 inches, but how long will that actually last? If Figueroa decides to shock us all and box on the outside, he may farewell for a little while, but his already porous defense would get exposed even quicker. That said, how will Luis Nery approach this fight, considering he looked very much stuck between styles in his last time out? Staying too patient and being hesitant to land combinations won’t help all that much versus a guy like Figueroa.

This boxing podcaster thinks he will get a tad more responsible defensively Nery in the beginning, but it won’t take all that long for him to show his aggression. Nery will likely get caught with a jab and clean punches while working his way to the inside to avoid positioning himself at the end of Brandon’s punch. Once Nery finds his groove, he will overwhelm Figueroa with combo punches to the head and body. Foot and hand speed advantage belong to Nery as well, creating a tough go at it for Figueroa. Don’t get me wrong, Brandon will land plenty of shots; some will be meaningful, but the pressure and accuracy of Luis Nery will prevail at the end of the night. A mild beginning to this fight will somewhat quickly turn into a solid give and take battle.

My Official Prediction is Luis Nery by Unanimous Decision.