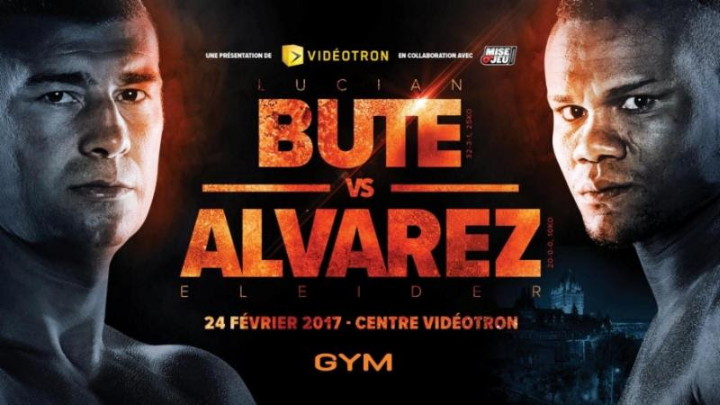 This event is a presentation of Vidéotron, in association with Mise-O-Jeu.

Alvarez will put his WBC mandatory challenger position to champion Adonis “Superman” Stevenson (28-1, 23 KOs) in danger with an end of April date for this world title fight having already been reserved.
Bute has also set his goal to challenge Stevenson. The veteran southpaw plans to clearly demonstrate that he deserves another wotld title shot, taking on the No. 1 conternder in undefeated Alvarez. Whatever the final outcome, the winner will be the most popular and legitimate challenger for Stevenson, dramatically increasing interest and notoriety of a totally Québécois world championship showdown.

All the ingredients are gathered to heighten popular interest in this fight, which will prove to be one of the most significant in the history of Quebec.

It is a local confrontation between two athletes who chose Quebec as their adopted home, fully integrating in the loal culture and learning French, as well as where they’ve fought the vast majority of their bouts. The result of this major clash will also have enormous repercussions at the international level in the light heavyweight division.

In one corner is former world champion Bute, who has delivered many inspirational performances during his 13 world championship fights (10-2-1, 8 KOs) to become a great star and admired celebrity in Quebec.

The other corner finds unbeaten Alvarez, a world-class fighter for the past three years who has delivered his most brilliant performances abroad, albeit mostly in the shadows of other great stars of Quebec. The former Colombian Olympian wants to establish his true value after having prepared for Stevenson by fighting opponents for more than the past year. He will earn his highest purse, which is similar to what he would have received to fight Stevenson first.

“It is the fans of Quebec in their entirety who will first be delighted with this mega fight and I am convinced that there will be no losers,” GYM president Yvon Michel said. “Although it is difficult to predict the outcome of this confrontation, most likely this fight will be so interesting and close that, eventually the two could get, one after the other, a world championship fight against the powerful southpaw champion of Montreal, Adonis Stevenson.”

“It was important for us to have this fight at the Vidéotron Centre,” added Vice-President Shows & Creative Content of Québecor, Michel Granger. “The last time (the Stevenson-Williams fight) was a success and it will be the same on February 24.”

“The last six months have been tough for me,” Bute explained. “After the Washington situation was settled, I was happy to finally sit down and discuss my next fight. I accepted as soon as I was offered the fight. We’re talking about an undefeated guy ranked number 1 by the WBC. It’s quite a challenge. I tip my hat to Alvarez for putting his position in peril.

“I was expecting the winner of the unification title fight between James Dégale and Badou Jack, but I had no guarantees and I could not afford to wait. My goal is to fight again for a world championship, whether it’s at 168 or 175 pounds, and I did not want to just take a meaningless preparatory fight.

“After evaluating all the options, we came to the conclusion that we had to take this fight,” Alvarez’ head trainer Marc Ramsey remarked. “Of course, there are risks … but it’s worth it. Eleider has long awaited an opportunity to box against someone recognized in Quebec, and people have not yet seen his full potential. He was all smiles when he received the offer.”.

“When Marc called me into his office,” Alvarez commented, “I was wondering what was going on. Generally, when he calls me into his office, it’s not good news. He asked me to sit down and if I wanted to face Bute. I smiled and said, yes. He is the most popular boxer in Quebec, so my motivation will be different. I’m doing this for myself and my family. I want to be world champion and now it’s going through Lucian. I’ve been looking a long time for a big fight like this and for the first time I will be the headliner.”

Tickets went on sale today (Monday, Dec. 12) on the Websites of Vidéotron Centre, Evenko and on Ticketmaster.ca
ABOUT GROUPE YVON MICHEL (GYM):

Groupe Yvon Michel (GYM) was founded in 2004 by Yvon Michel and his associates. The organization’s mission is the development of high-level boxers through coaching support and especially by competitive management. To achieve its objectives, GYM actively recruits talent and organizes events and it is associated with the popular series, “Premier Boxing Champions (PBC),” and has developed major Videotron partnerships with Loto Quebec, TVA Sports, Centre Videotron, Casino de Montreal and Lac Leamy, Tonik GroupImage and Lapointe Dental Centre, in addition to collaborating closely with Rixa Promotions.