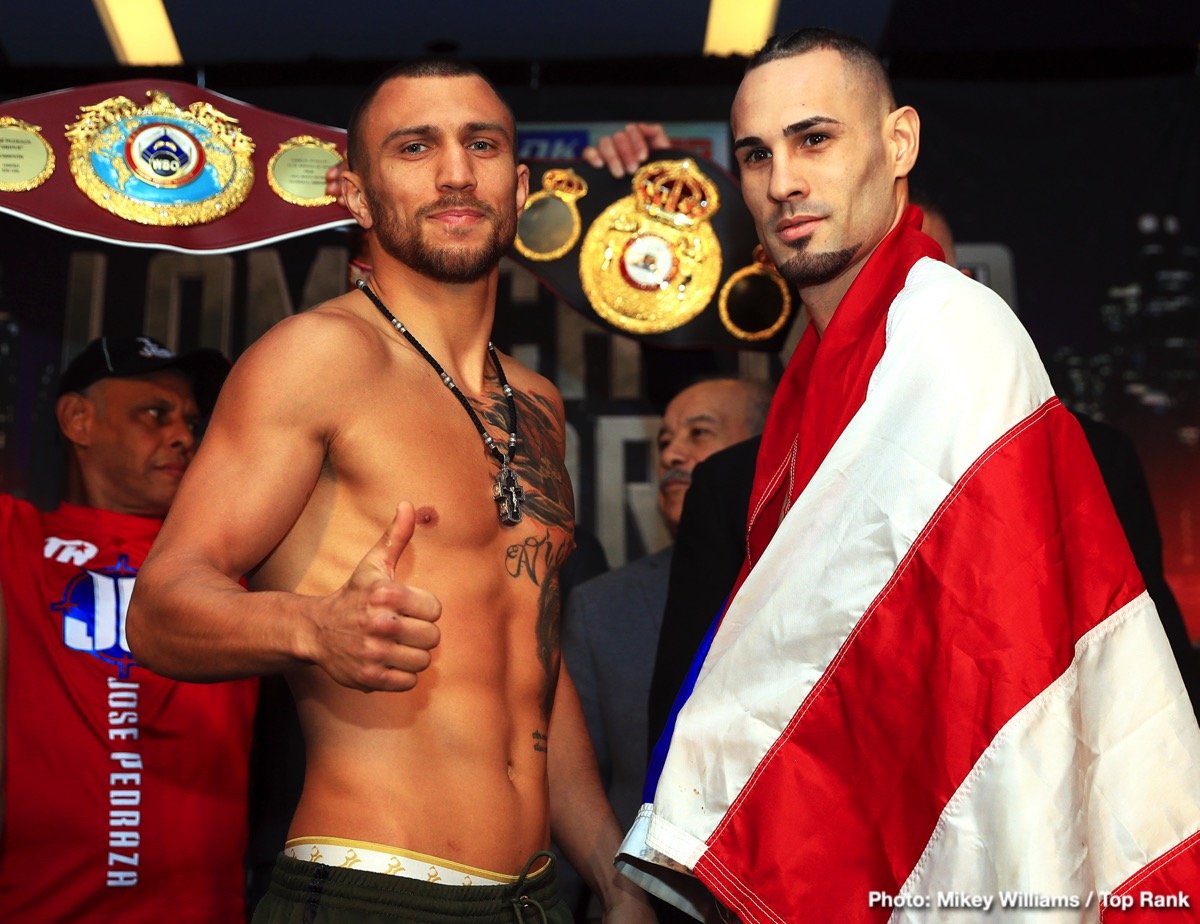 This Saturday night Vasiliy Lomachenko’s hopes are set high in effort to accomplish yet another feat in an already impressive career with only 12 fights. His opponent Jose Pedraza puts his WBO lightweight title on the line in a unification bout at the Hulu Theater in Madison Square Garden, on ESPN. Can the Puerto Rican native present issues for the best pound-for-pound fighter in the world? Or will Vasiliy make another boxer quit on the stool?

The style in which Lomachenko normally fights is a thing of beauty to even the most casual fan. This hack-of-a-scribe will answer questions from barely-boxing fans about Loma as far as upcoming fights or just in general, mostly based off his appearance on the undercard for Mayweather vs. Pacquiao.

The 2-time gold medalist representing his native Ukraine has really hit the ground running these past four years. A split-decision loss in his second fight against Orlando Salido is the only blemish on a stellar resume. Gary Russell Jr., Nicholas Walters, Guillermo Rigondeaux, and Jorge Linares are standout victories over quality opposition. Russell couldn’t really ever catch up to Loma for most of the night back in 2014, three 1/2 months after taking his first defeat, while Rigo and Walters retired between rounds looking lost throughout most of the fight.

Back in May, Jorge Linares gave Loma a run for his money even knocking him down with a flush right hand. Lomachenko would go on to beat Linares via technical-stoppage in the tenth. The new weight class of 135-pounds proved challenging enough to humble Loma in a sense. Anatoly Lomachenko, the father of Vasiliy, made it known that his son will not fight above the lightweight division for the foreseeable future. So much so the camp turned down an opportunity to fight Manny Pacquiao which obviously ruled out Terrence Crawford as well. On one hand Pacquiao’s name would give a sizable boost in profile. On the flip side it’s easy to see Lomachenko above 135 would not the same guy at this stage anyway.

Jose Pedraza competed in the 2008 Olympics as a member of the Puerto Rican national team. Pedraza build his record to 20-0, beating a then inexperienced Tevin Farmer and decent prospect in Andrey Klimov for a vacant belt. Jose’s first true-test came in a grueling 12-round tussle against Edner Cherry. Cherry’s work rate combined with a good amount of roughhousing made life very difficult for Pedraza. Of course the judges leaned heavily toward the unbeaten 130-pound IBF champion.

Pedraza is a talented, somewhat slick fighter who lacked true punching power at junior lightweight. At the full-lightweight limit it will be interesting to see if it helps Pedraza not having to suck-down those 5 extra pounds. Fighting out of an orthodox style, The Sniper’ is capable of boxing on the outside as well as bringing the fight to Loma. The best fighter Pedraza faced was Gervonta ‘Tank’ Davis, beyond a few moments of success, Tank pretty much handled Pedraza stopping him in the 7th round.

If anything Pedraza serves as a good measuring stick for a potential but hardly-possible showdown between Davis and Lomachenko. What game plan is best suited for Pedraza heading into his clash with Vasiliy? Should Jose stick to what he thrives at by keeping distance or should he mix things up a bit and use similar roughhouse tactics ala Salido to frustrate Lomachenko. Staying in the middle of the ring engaging in a skills-fest seems counterproductive.

It would be wise to keep Lomachenko at a distance if at all possible. Tying up while getting shots off could pay dividends as the rounds go by. Although Loma’s footwork and speed is out of this world, it shouldn’t stop Pedraza from sticking to what he knows best. Pedraza will need to take advantage of his length by staying in his comfort zone most of the fight. A five and a half inch reach disparity for Pedraza screams he should work on the outside preferably on the move. When Loma cuts distance, Pedraza’s clinch and hit ability will be key.

For Lomachenko, patience will be important as he maneuver’s his way inside. Timing the long jab of Pedraza’s will be the first stage to detonate Jose’s main weapon. Fancy footwork using angles to attack and then retreat will likely be the way to go for Lomachenko. The pivot jab from Loma is deadly and a great way to keep Pedraza off-balance.

This main event will start fairly fast and resemble a game of high-speed chess unless Loma is a bit gun-shy from the recent shoulder injury. The problem for Pedraza, he will be facing a grand master of chess in the ring. The only way Pedraza wins this fight may be a counter right hand mixed with borderline cheating during the clinch. Pedraza will hang for several rounds but it’s just a matter of time until Lomachenko pulls his card.

The outcome whether unanimous-decision or knockout will be decided by how bad Pedraza wants to win down on the scorecards. If he’s all in and rages forward it won’t go the full-12. If Pedraza using that reach and does a good job smothering Loma it could go the distance.

My Official Prediction is Vasiliy Lomachenko by late stoppage.

Side Note: This card will get a lot of exposure being slated right after the Heisman Trophy Award. Keep a close eye on the co-feature Dogboe vs. Navarrete as well as hot-prospect Teofimo Lopez on ESPN and ESPN+. 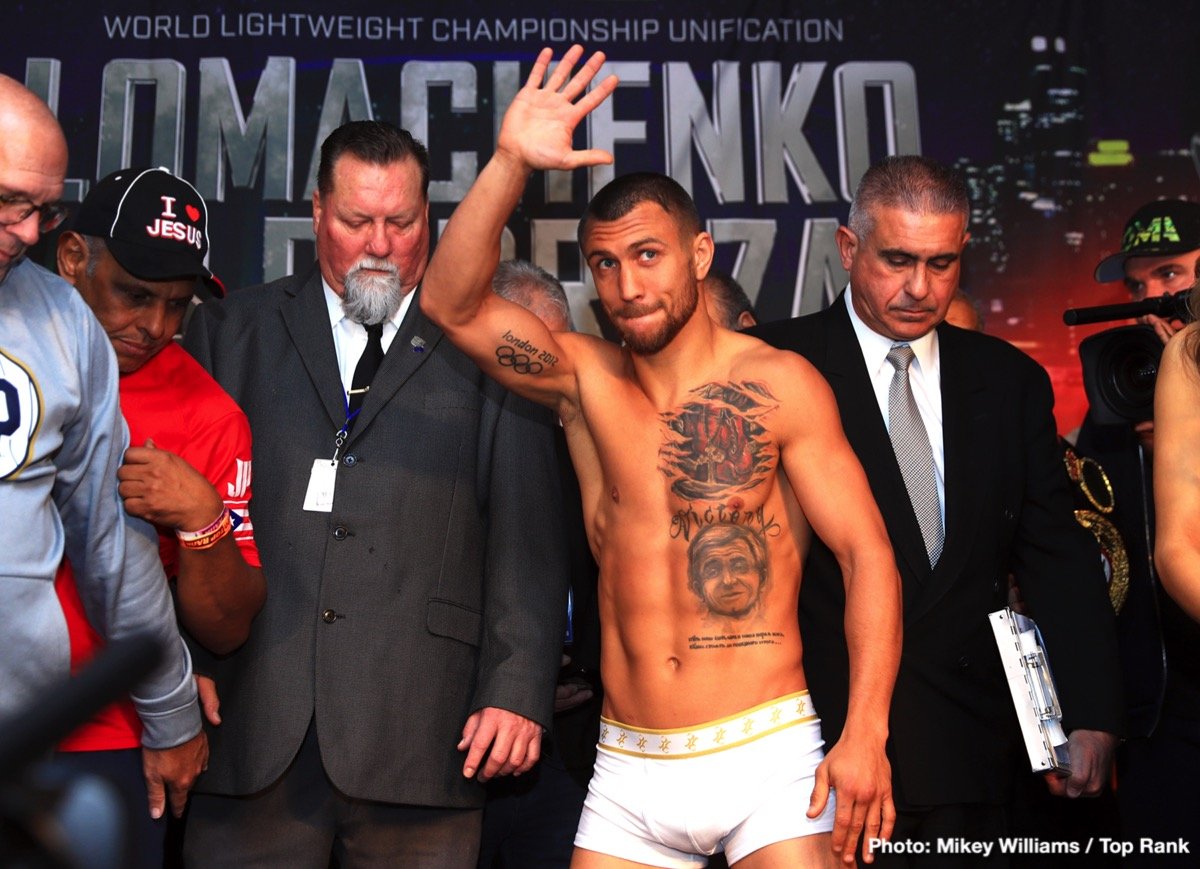 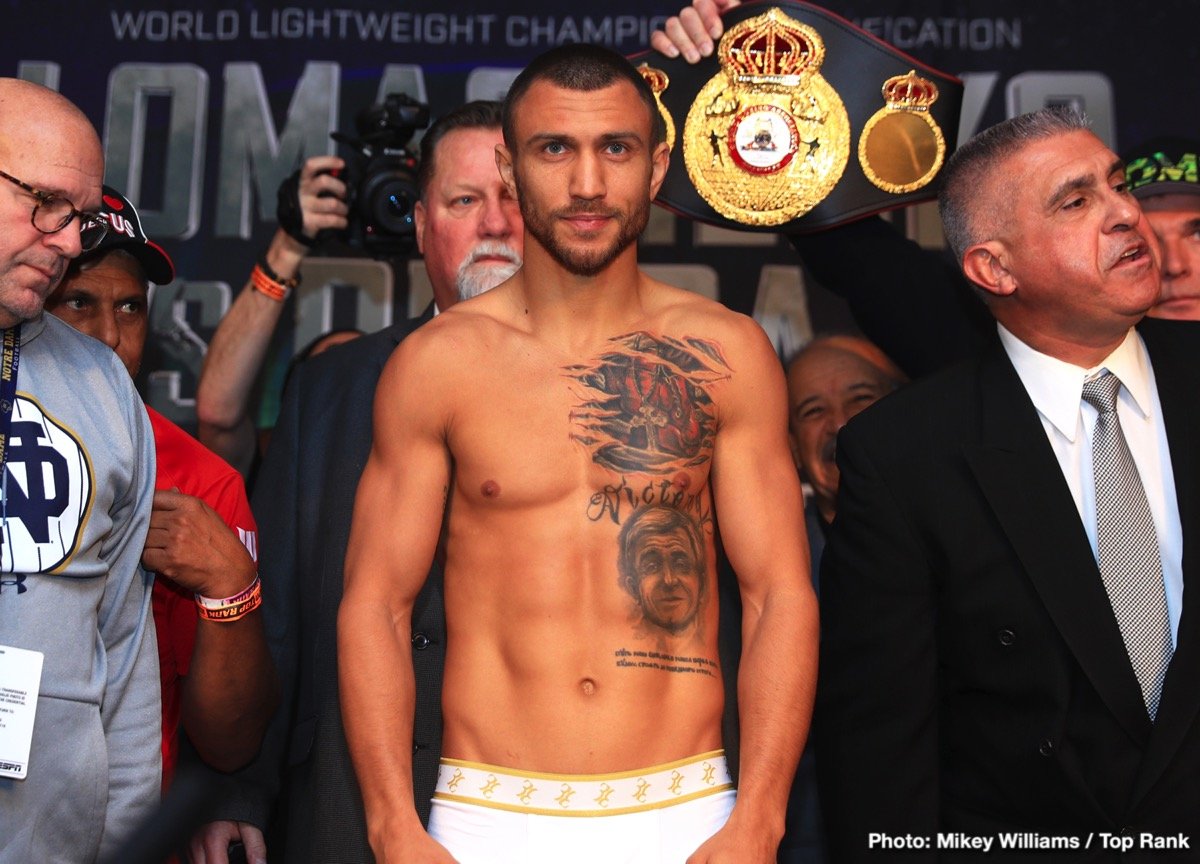 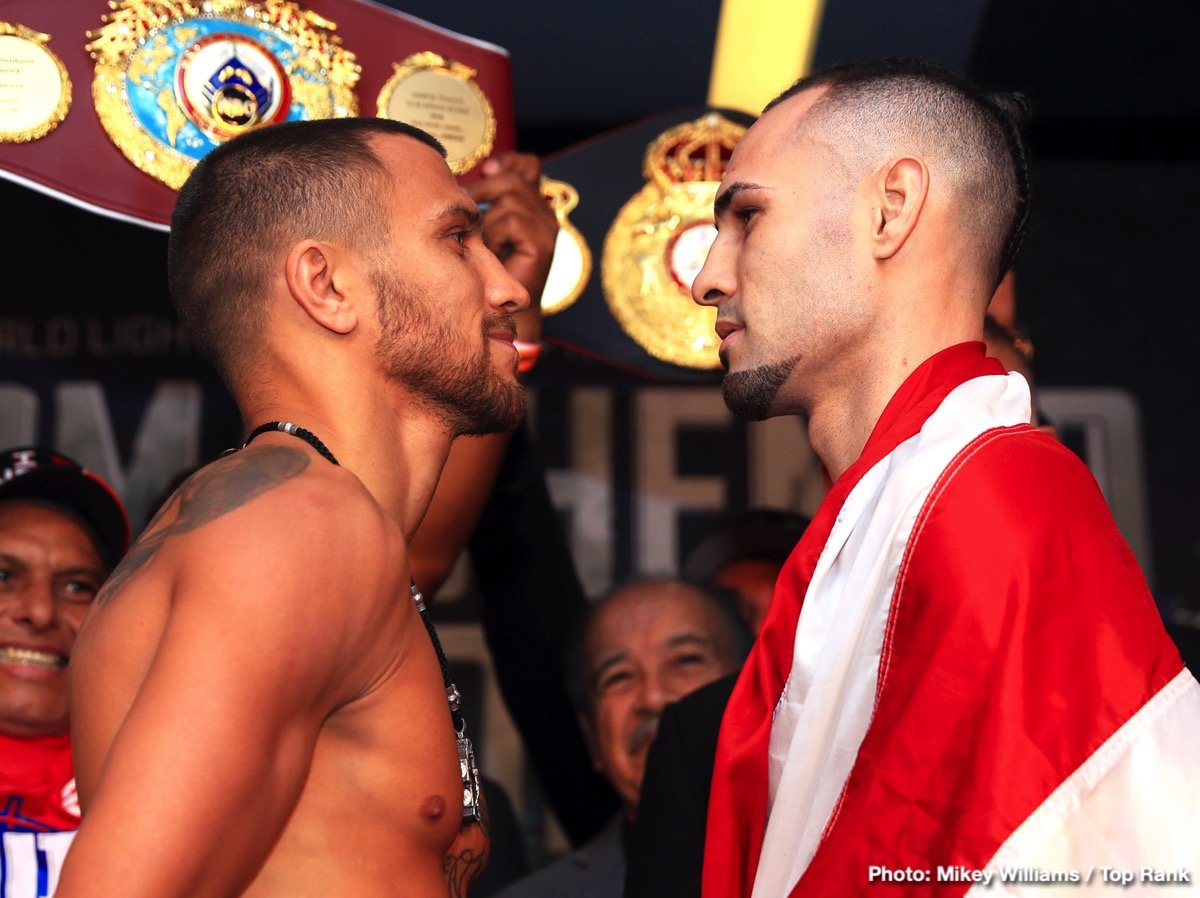 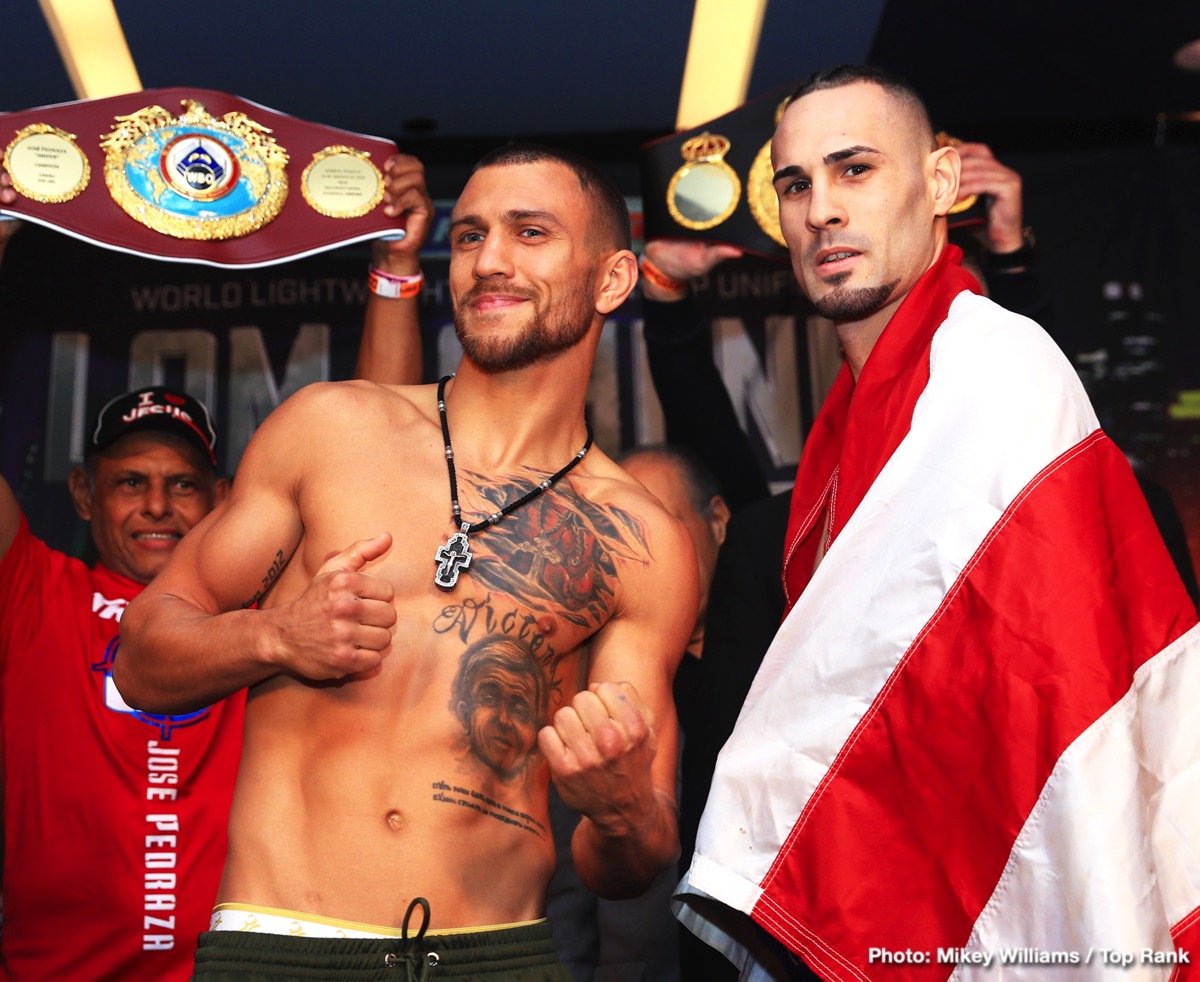