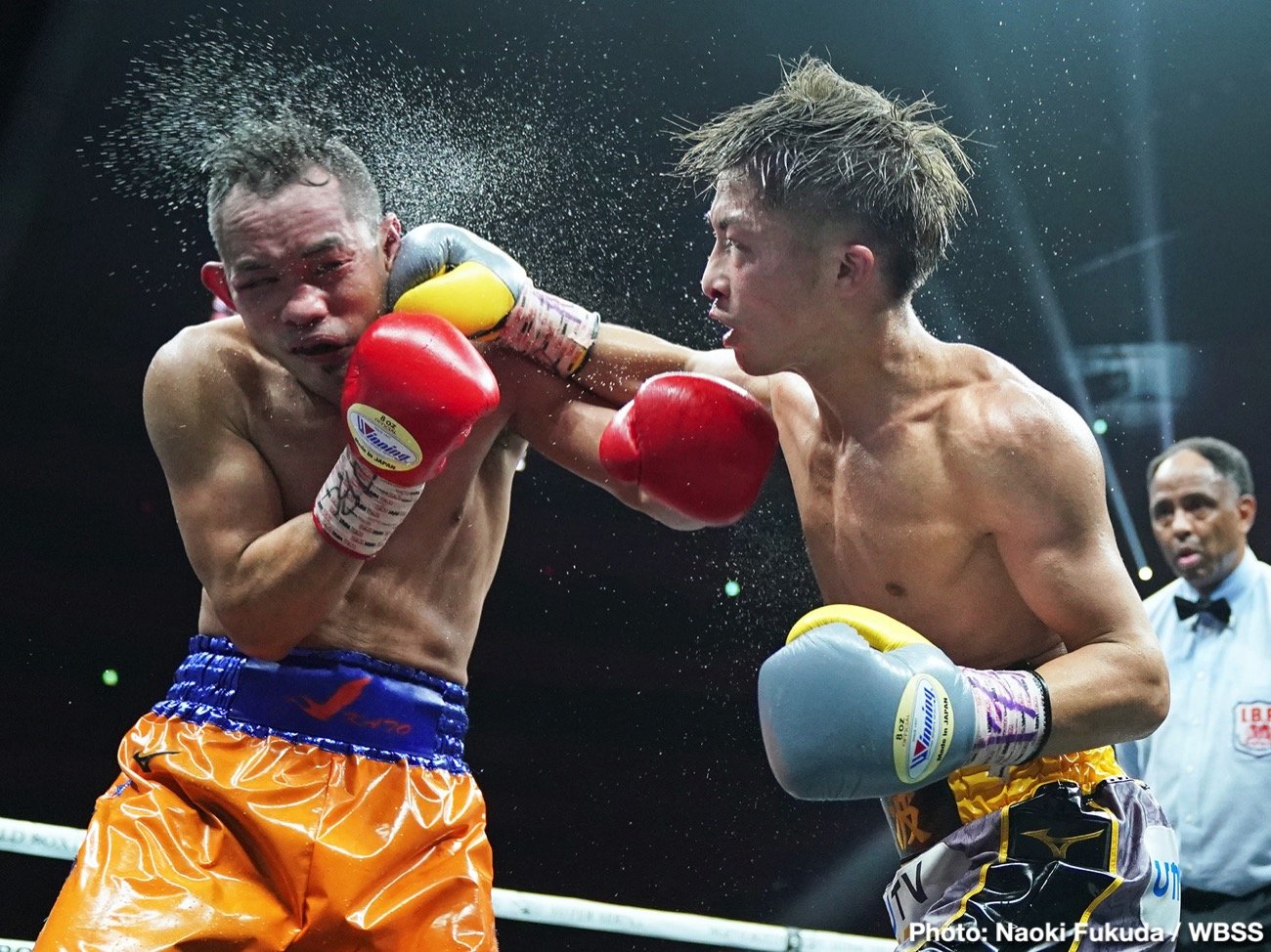 WBA bantamweight champion Nonito Donaire (40-5, 26 KOs) gave IBF/WBA champ Naoya Inoue (19-0, 16 KOs) the fight of his life in losing to him by an exciting 12 round unanimous decision in the WBSS final on Thursday at the Super Arena in Saitama, Japan. Inoue was cut over his right eye in the 2nd, and suffered a bloody nose in the third.

Donaire was forced to take a knee in round 11 in a delayed reaction from a body shot from Inoue. After Donaire got back, he took a lot of one-way punishment from Inoue. Somehow, Donaire stayed on his feet and weathered the storm. The referee showed a lot of patience in not stopping the fight. He surely could have halted it, and no one would have faulted him for doing so.

Donaire showed that Inoue doesn’t take punishment nearly as good as he dishes it out. Had Donaire not faded, he might have stopped Inoue. This is the same thing that we saw in Inoue’s fight against David Carmona.

When Inoue couldn’t knockout Carmona right away, he got frustrated, and looked nervous every time he got hit. Inoue was forced to go 12 rounds against Carmona, and at times he was running from him. We saw a little of that tonight from Inoue. He didn’t like getting hit back, and he did a fair amount of moving. In the second half of the fight, Inoue got frustrated.

Donaire lacked the stamina to win

The former four division world champion Donaire gave it a good effort, but ultimately he didn’t have the engine, punch accuracy or the speed to defeat 26-year-old Inoue. Donaire missed with a lot of his shots, as the smaller fighter Inoue moved frequently get out of the way of his punches.

Inoue was a little bit better in the first seven rounds, but Donaire came back strong in rounds 8 and 9 with his heavy shots. Donaire was landing thudding shots to the body and head of the smaller fighter Inoue. At the point in the fight, it appeared that Donaire was going to wear Inoue down and force a stoppage.

Naoya hurt in 9th round

Inoue had to hold on in the 9th after Donaire nailed him with a hard right that had his legs looking like jelly. If Donaire had the ability to fight on the inside, he could have finished Inoue. He let Inoue hold to get out of the round.

When the bigger fighter Donaire did land, Inoue looked bothered by the shots. The wear and tear that Donaire was putting on Inoue had him bleeding and tired in the championship rounds. Although Donaire was missing a lot, the shots that he did land had an effect on Inoue. He looked visibly tired at having to defend against Donaire all night long.

Unification fights in the future for Inoue

The victory for the young Inoue gives him the Ali Trophy, and sets him up for possible unification matches against WBC champ Nordine Ouabaali and WBO title holder Zolani Tete.

Donaire kind of exposed Inoue in a way by letting the boxing fans see that he wears down under pressure and punishment. In looking at this fight, Inoue would have not made it to the final bell had this fight taken place in Donaire’s prime in 2011 and 2012. When Donaire was at his best, he would have been a nightmare for Inoue.

Naoya Inoue should consider moving back down to 115

The way that Inoue looked tonight, he really needs to think about going back down to super flyweight [115 lbs], because he’s small for this weight class. Yeah, Inoue might be able to win for a while, but he’s going to lose eventually in the not distant future against a young fighter. Donaire would have done had been younger in this writer’s view, but he didn’t have the youth. Inoue might not have the size the toughness to beat the likes Luis Nery or Zolani Tete.

Inoue didn’t look like the star that some boxing fans have been calling him. If he was the real deal, he should have been able to destroy the 36-year-old Donaire, but he couldn’t. Inoue is a good fighter, but he’s not the super talent that some thought he was. This isn’t all that surprising to me, because Inoue never fought the talented guys at 115 when fought in that weight class.

Inoue didn’t face Juan Francisco Estrada and Srisaket Sor Rungvisai. It seemed like Inoue was in a hurry to get out of that weight class. So we never what he could do. Tonight, Donaire exposed Inoue by hurting him and showing that he wears down when taking shots.

Inoue needs to think hard about whether he should stay at bantamweight, because he doesn’t look big enough. Donaire was rattling Inoue to pieces with his pressure. If this had been a young fighter with accuracy AND power like Luis Nery, we might have seen Inoue crumble physically and mentally from the pressure.

Donaire left the ring quickly after the fight. He had taken a lot of punishment, and it’s not all that surprising that he didn’t stay around to give a lot of interviews.

WBC bantamweight champion Nordine Oubaali (17-0, 12 KOs) and retained his title in beating Naoya’s younger brother interim WBC belt holder Takuma Inoue (13-1, 3 KOs) by a 12 round unanimous decision.  Oubaali knocked Takuma, 23, down in round 4, and had him hurt in the 2nd as well. Oubaali let his foot off the gas in the second part of the fight and that allowed Takuma win some rounds.

The scores were 117-110, 120-107, and 115-112. There’s no question that Oubaali deserved the decision. He landed the harder shots, and fought well for the most part. The light hitting Takuma came on in the second half of the contest to make it interesting with his pressure. He was motivated by the crowd, and they helped him fight harder.

The way Oubaali fought tonight, he wouldn’t stand a chance against Naoya. It would be wise on Oubaali to forget about facing Inoue in a unification, because he doesn’t have the power, speed or the engine to beat him. If Naoya’s raw, light hitting brother Takaum was able to give Oubaali  trouble, then there’s no way he’ll be able to hang with him. 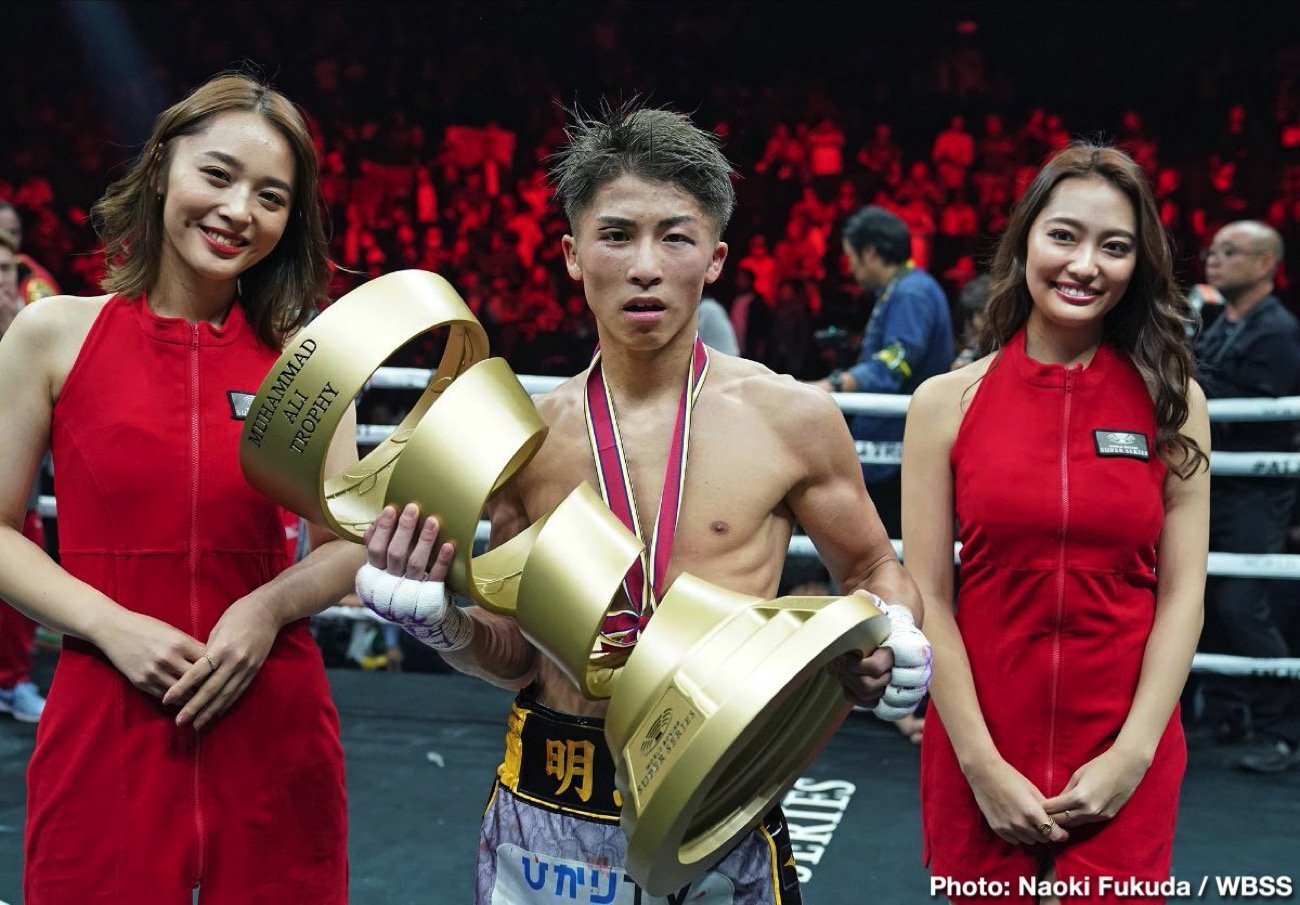 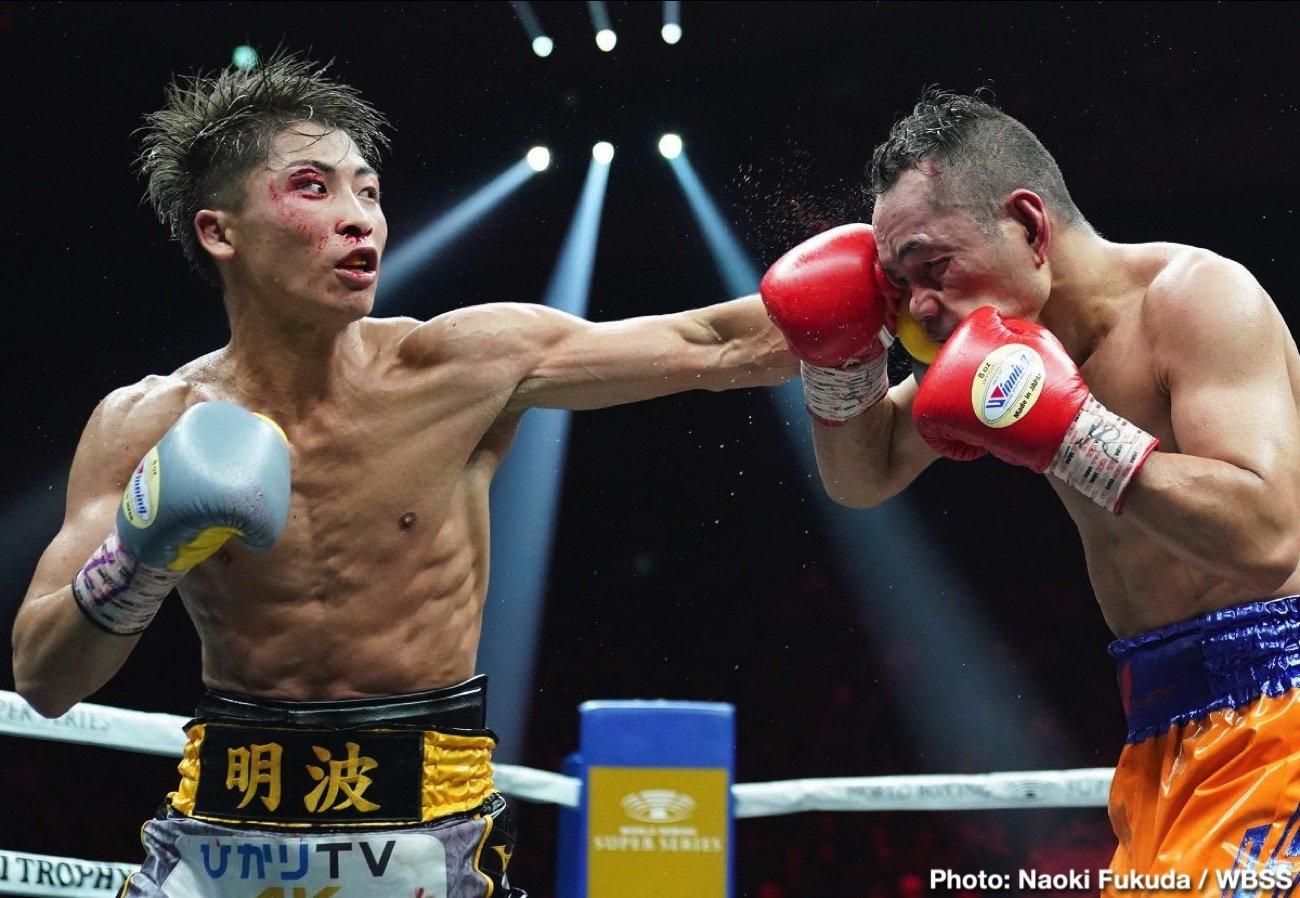 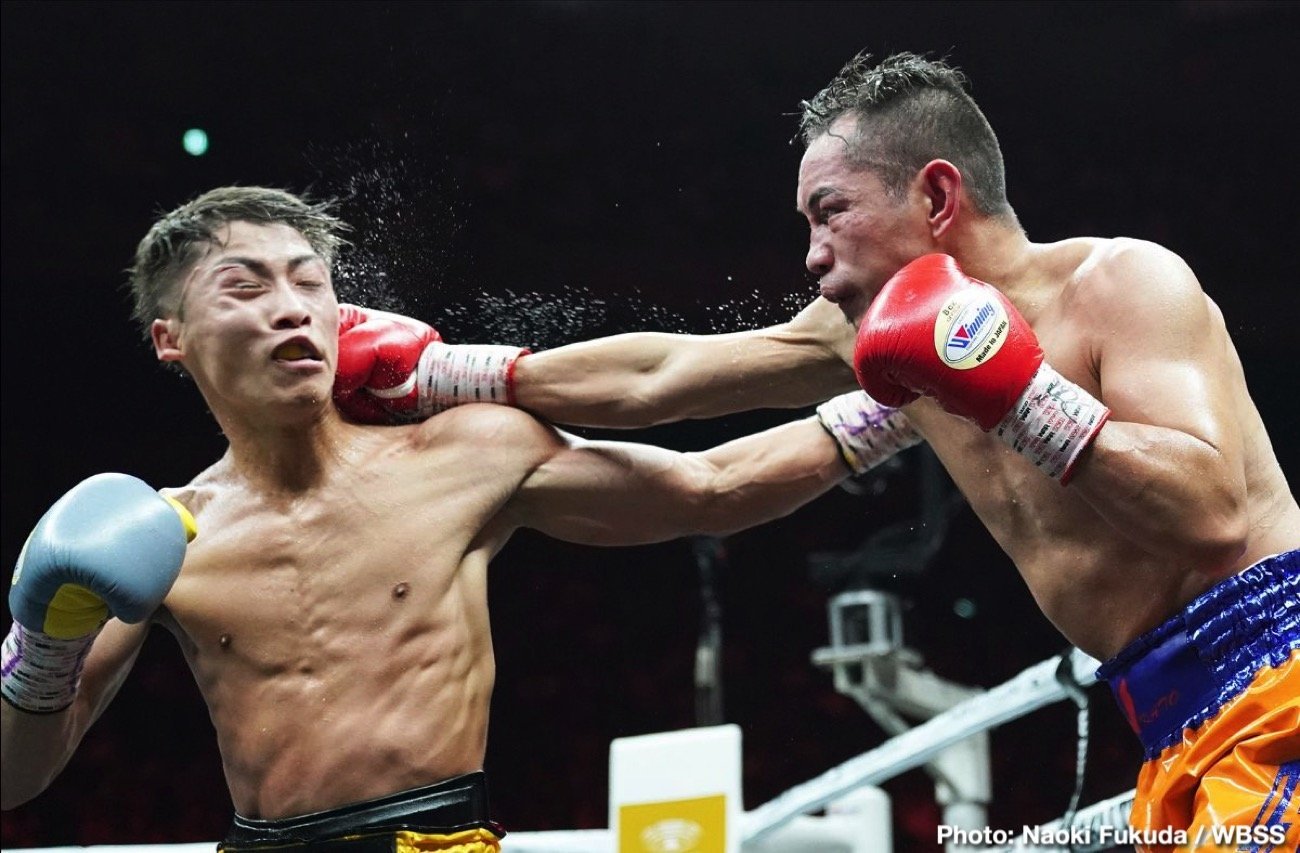 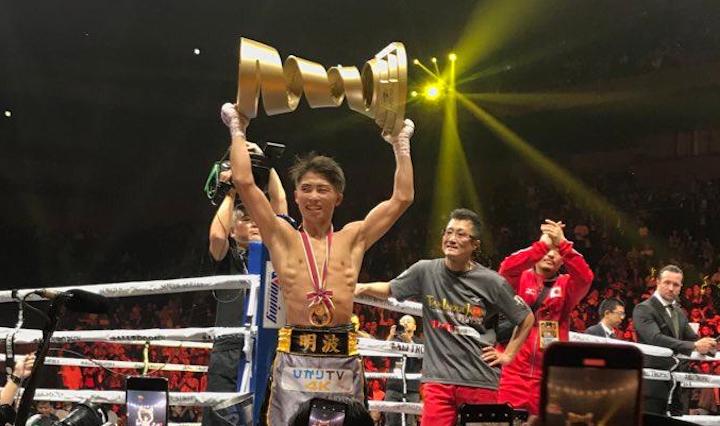 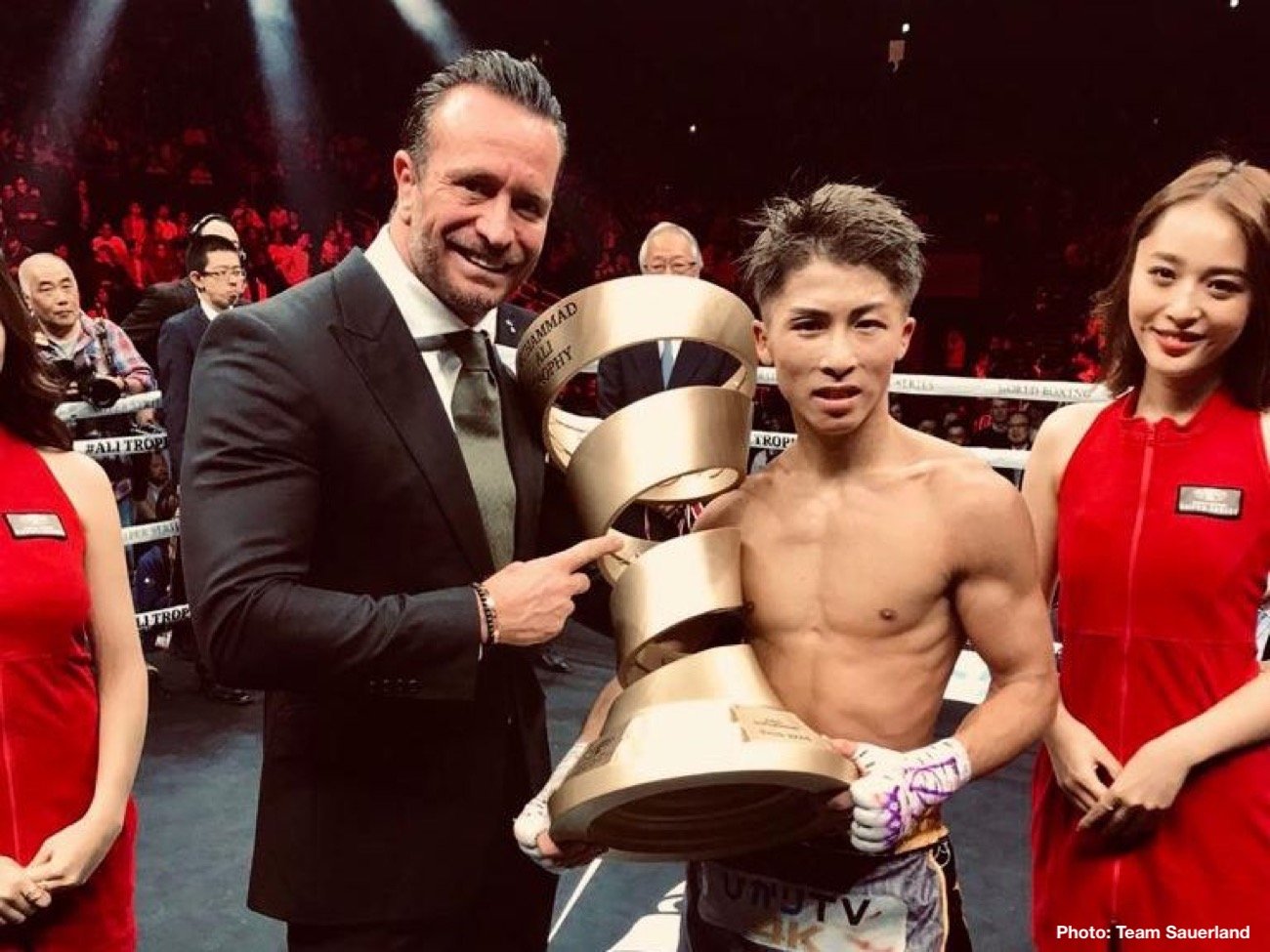